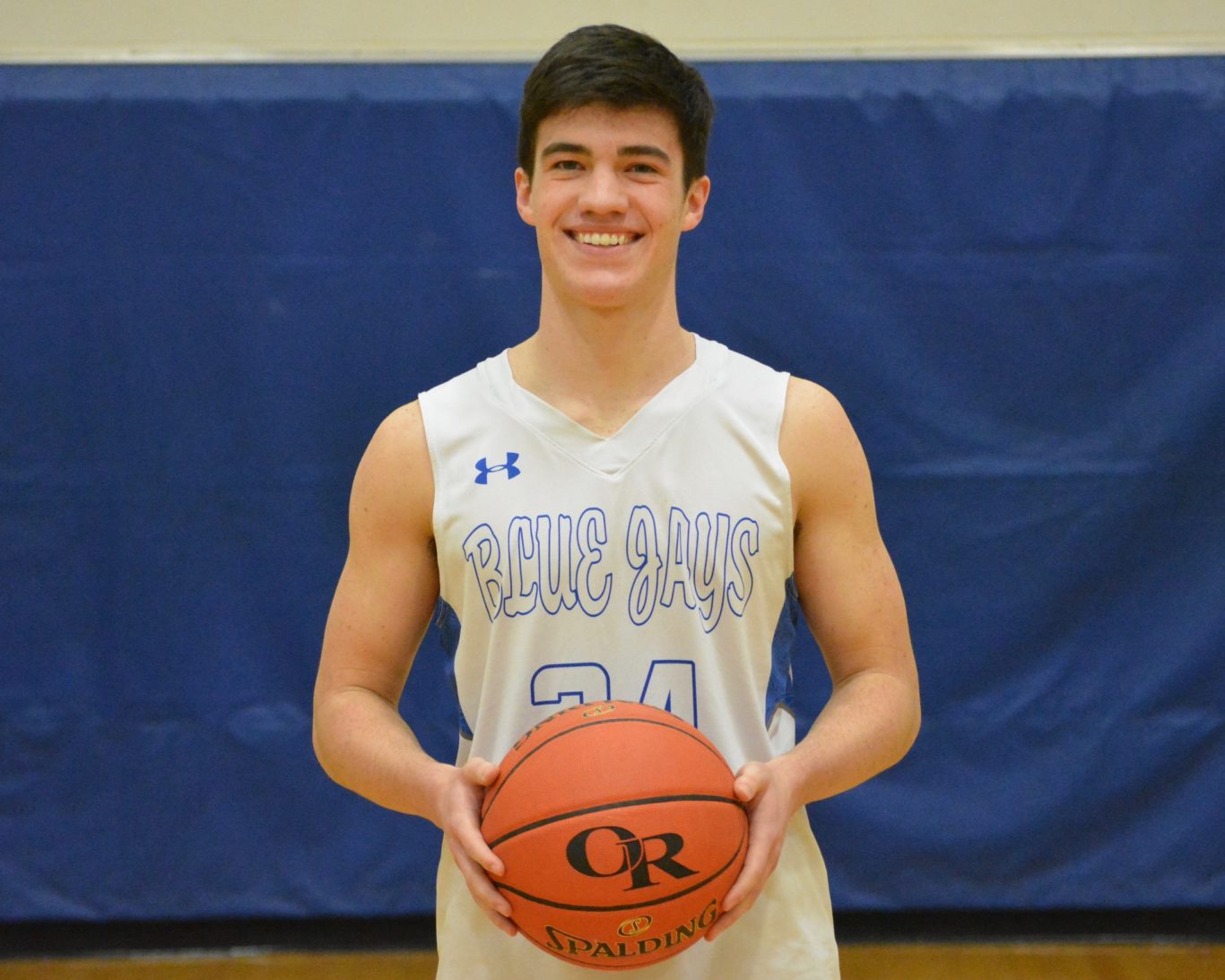 There was only one year in Oak Ridge senior David Layton’s life when he was not playing basketball, which just so happened to be the first year he was on this Earth.

Layton has had a basketball in his hands ever since he was two years old, which is a sport he grew a quick love for because of the “competitive greatness” it possesses.

“[I love] the feeling of playing against great competition and just going out there and giving it your best,” Layton said.

Two weeks ago on Friday, Jan. 17, Layton became the first player in the history of the Oak Ridge boys basketball program to score 2,000 career points. He did so with a free throw against Zalma on his home court.

Layton said it was an emotional moment when he reached the milestone, especially in front of all the people in his life who he thanks the most for helping me throughout his career.

“[Scoring my 2,000th point at home] was a great feeling,” Layton said. “I just want to thank all my teammates and coaches, my parents and all the fans. I couldn’t have done it without them.”

Layton was not a starter his freshman year at Oak Ridge before his current head coach Chris Trimmer took over his sophomore season. The Blue Jays finished 10-15 overall Layton’s freshman year, and he became motivated to start heading into his second year of high school basketball.

“It was probably the first time in my life when I wasn’t on the top of something, and it really motivated me, so I kept going,” Layton said.

Following Layton’s first season as a full-time starter his sophomore year, he realized 1,000 career points was an obtainable goal after averaging 24 points per game along with seven assists and six rebounds. Layton garnered all-conference and all-district honors following the season.

Oak Ridge also improved to 15-12 overall with Layton in the starting lineup as the Blue Jays lost to Advance in the Class 1 District 2 Championship game. The Hornets fell to eventual state champions Eminence in the quarter-final round that year.

As a junior, Layton scored a total of 941 points and finished with an average of 34.9 points per game, while also leading the Blue Jays in categories other than scoring like rebounds (8.5), assists (5.7) and steals (4.7). Layton was also leading the nation in scoring average at one point, but no one else at Oak Ridge besides Layton and the team knew about it.

“I started asking teachers, ‘What’s the word in class?’” Coach Trimmer recalled. “They’re all like, ‘About what?’ I go, ‘About David?’ … Nobody even knew — he never talks about himself.”

In Coach Trimmer’s 38 years of coaching, he said Layton has been the most enjoyable player he has had because of his work ethic, selflessness and kindness. Trimmer was putting together his own dream team of players he has coached in the past, and while doing so, he realized he’s never had a player who possesses “everything” Layton does.

“Incredible basketball I.Q., incredible drive to be the best, humble at the same time, a quiet team leader — you just don’t get those kids,” Coach Trimmer said. “They’re really, really rare. I’ve watched David grow the last three years, and he just gets better and better.”

To no surprise, Layton was named to the Class 2 All-State team following his junior season, which was a goal of his after not being named all-state as a sophomore. During the summer of his junior year, Layton spent countless hours in the gym working on his shot.

For summer workouts, Layton would arrive 30 minutes earlier than scheduled so he could have his workout in the weight room finished in order to spend more time on the court. According to Trimmer, Layton took roughly 1,500 to 2,000 shots each day over the course of four hours.

Layton’s routine involved jump shots, layups, free throws, floaters and 3-pointers from every spot on the court, and he would repeat this regime every single day.

“That was probably the most motivated I’ve ever been,” Layton said. “I put in hours upon hours in the gym, and it really showed [my junior] year. I was happy to see that. Really my love for the game and the passion I have made me want to get better.

“I actually enjoyed the work when most people think it’s hard and they don’t want to. I found it kind of easy for me to get up early and [train] because I loved it so much.”

Oak Ridge finished with the most wins in program history Layton’s junior year with 20 on top of just eight losses as the Blue Jays started off the season by winning the Woodland Invitational.

In the 74th Annual Christmas Tournament held at the Show Me Center, Oak Ridge only played in three of the four days. This did not stop fans from voting Layton as the tournament’s Most Valuable Player after scoring 96 points in three games, including a 30-point performance against Charleston.

Charleston has won two Class 3 State Championships under current head coach Danny Farmer, who was inducted into the Missouri Basketball Coaches Association Hall of Fame in 2010 and thought his team could slow down the Blue Jays all-time leading scorer.

“Coach Farmer gave the best compliment you could give,” Coach Trimmer said. “He said, ‘I really thought we could stop that kid. I was wrong.’ To me that’s the greatest compliment because you’re talking about one of the best defensive coaches in the history of Missouri.”

To end Layton’s junior year, Oak Ridge fell in a district title game once again but this time to the reigning Class 2 State Champions Oran in the C2D3 Championship. The Eagles made it back to the state title game, but they fell to Greenwood 55-54.

Despite not winning a district title, Layton said he felt like he achieved what he envisioned for himself as a junior. Layton also said he notices there is a more positive vibe in the community when it comes to Oak Ridge basketball.

The Blue Jays are back in Class 1 District 2 this season and are currently 9-6 overall with the goal being to finally win a district championship. One of Layton’s lifelong teammates Zach LeGrand achieved a career milestone as well this season by surpassing 1,500 career points earlier this month.

“We’ve been in the same class, so we’ve always played together — we’ve always had a special chemistry,” Layton said. “I know where he’s going even without having to say anything, so we’ve benefited from each other.”

Layton is currently averaging 22 points per game along with 4.8 rebounds, 3.7 steals and 3.5 assists. LeGrand is nearly averaging a double-double with 18.6 points and 7.2 rebounds each contest.

One of the reasons why Layton’s averages are down from his junior year is because over the summer he learned he had developed advanced patella tendonosis in both knees. Layton has talked with therapists and doctors, who explained it’s something he has to deal with.

“Along with the physical struggle, it’s also a mental struggle,” Layton said. “I had to process it and find ways to help ease the pain. It’s a process of icing, stretching and doing all of that to limit the pain. Then learning to just play through it and with it.”

Arguably the most difficult part for Layton has been having to “ease back” because of his condition, but he’s become comfortable with his new role. Layton has been focusing more on facilitating the offense and getting his teammates more involved.

Coach Trimmer said due to this injury, Layton has had to sit out practices as well as sit out games even after starting. “It hurts him more than anything because he feels like he’s letting us down,” Trimmer said.

Trimmer said watching Layton change his game has been incredible to watch because of how much he’s elevated his game as a passer. “If you’re not watching him, he’ll knock you out with a pass. It is so enjoyable to watch [this team].”