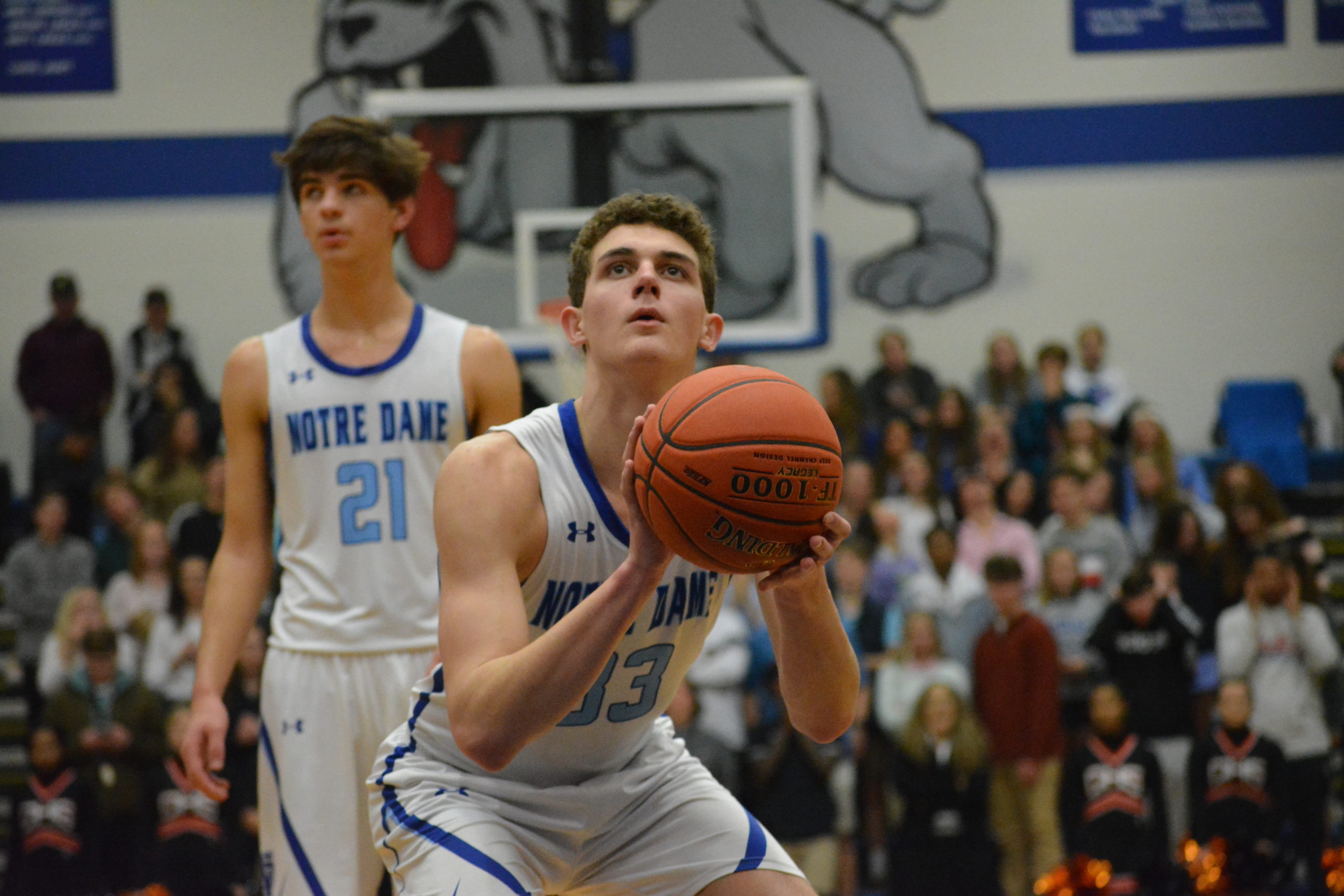 The Bulldogs first did so back in the 2014-15 season during Unterreiner’s first year, and they did so last winter with a six-point, 59-53 win over Westminster Christian Academy in the quarterfinals.

However, instead of competing to win its first state championship since 2008, Notre Dame and the rest of the teams in Class 4 and 5 never got the chance to play in the Show-Me Showdown because of the coronavirus pandemic.

Now heading into this season as defending SEMO Conference and district champions, the Bulldogs are hoping to continue that type of success as they return two starters from last year.

Those two players returning to the lineup for Notre Dame are seniors center Caleb LeGrand (6-foot-5) and forward Jake Young (6-4), while fellow senior guard Hayden Jansen (6-1) also hopes to make an impact in the starting lineup.

“We don’t get as far as we did in the postseason [last year] without Hayden,” Coach Unterreiner said. “He waited his time, and we tried different things for a majority of the year. After Christmas, we started piecing him in there and starting taking off. Caleb’s defensive presence is unquestioned — he’s one of the best defenders I’ve ever had.

“He can just change the game, and we can press and get a little more aggressive because we have them back there to challenge guys at the rim. Jake is one of those guys that goes under the radar of so many people, but we’re so much better when he’s on the floor. That’s the most important thing, and he’s a guy that never gets tired. He stays in the game as long as he can.”

LeGrand returns as the Bulldogs leader in scoring (11.2 points per game) and rebounds (6.9 RPG) as he shot 54.7% from the field. LeGrand was also far and away Notre Dame’s leader in blocks with an average of 3.1 per game.

Back in August, LeGrand officially received an offer to play college basketball from Rose-Hulman Institute of Technology after earning all-conference and all-district honors last winter.

“The key to Caleb is what can he give us offensively,” Unterreiner said. “I think that’s yet to be seen, and I think college coaches see his length and athleticism. I think the key is he’s got so much untapped potential, and I’m hoping we can tap into that this year.”

Coach Unterreiner said that LeGrand has a pretty good jump shot, but he ultimately feels that Caleb is “passive” around the basket physicality wise. What Unterreiner is hoping LeGrand can do to improve offensively is fine tune one or two of his moves. “He’s going to finish around the rim if he can get in position.”

Only two other players besides LeGrand averaged double-digit points per game last season, and they both graduated this summer. Those former Bulldogs were leading scorers guard Tyler Landewee and forward Justice Thoma, who are both now playing college basketball.

Landewee signed with Southwestern Illinois College after an all-state campaign his senior season at Notre Dame, where he led the team in points (13.5 PPG), assists (3.9 APG) and steals (2.4 SPG).

Thoma decided to stay in Missouri as he inked with Three Rivers Community College as he was named all-conference and all-district after the 2019-20 season. Last year, Thoma produced an average of 12.2 points, 5.4 rebounds and 2.6 assists per contest.

“I mean No. 1, their pure athleticism and ability to play the game is something you miss right off the bat,” Coach Unterreiner said. “I think what this year’s team is going to be different from last year’s is we had a go-to scorer in Tyler Landewee — a go-to guy to create. Then you’re going to miss the athleticism of Justice, who could put the team on his back for periods of time.

“We’re just going to have to find a different way to score the ball this year. Last year, we could just put it in Tyler’s hands and say, ‘Everybody, get out of the way.’ We don’t have that guy this year, and we’d be lying if we said we had that guy. We’re just going to play, and we’re going to move the ball. We’ve got a really unselfish group that finds the best shot to take.”

Along with Landewee’s overall production, the Bulldogs will miss his 3-point shooting as he knocked down a team-high 37 threes and made 43.5% of his attempts. Notre Dame also graduated fellow guards like Kam Dohogne and Drew Heisserer, who combined for 54 treys.

Becoming one of the Bulldogs top shooters from beyond the arc at the end of last season, though, was Jansen. In Notre Dame’s 38-37, double-overtime win over Cape Central for the district title, Jansen made a total of three 3-pointers while coming off the bench.

Overall, Jansen finished as the Bulldogs third leader in 3-point makes with 28 off 54 tries for a team-high percentage of 51.9%. He also came up with 5.2 points per game with an overall shooting percentage of 58.6%.

“When you’ve got a guy that shot over 50% from the 3-point line, that opens up a lot of things,” Unterreiner said. “Tyler Landewee and Justice Thoma saw a lot of lanes to drives because they weren’t going to help off Hayden. We’re really excited to see what he can do this year, and he knows he’s going to be keyed on a little bit more. He’ll just have to find different ways to score, but I’m excited about what he’s going to do this year.”

As for the team’s other returning starter besides LeGrand in Young, Coach Unterreiner said he’s the type of player who gives his all during both games and practice. This shows up in games as Young fills the stat sheet and averaged 6.4 points (tied for fourth on team), 4.8 rebounds (third), 2.1 assists (fourth) and 1.3 steals (fifth) while shooting 55.3% from the field his junior season.

“One of the key things for Jake offensively this summer is he looked to score a lot more for us,” Unterreiner said. “He’s a guy that could step up and hit that 3-point shot. The more consistency he is with that the more effective he’ll be. He’s got great post moves — the thing about Jake is there’s not anything about him that I can tell you he does poorly.

“He might not do something great, but he does it with such effort that you can’t call it poorly. If somebody is going to try that hard, we’ll be all right. He’s just a guy that if everybody in our program was like him, we’d be tough to beat every night.”

Two seniors who will be fighting for more playing time this winter will be guard Nick Williams (5-8) and forward Chase Logel (6-2). Also competing for playing time will be junior forwards Drew Vandeven (6-2), Quin Hunter (6-3) and guard Blake Anderson (6-1).

There are also two underclassmen who should be in the mix to see time on the court in guards sophomore Cole Bruenderman (5-11) along with freshman Nolan McGuire (5-8). McGuire played with Notre Dame over the summer as Coach Unterreiner said he’s little but held his own.

During summer ball, the Bulldogs played in a total of three shootouts as they were able to find a number of different ways to score the basketball, Unterreiner said. He also stated his players defended well and didn’t hesitate to take shots.

“Everyone who was on the floor could take the shot,” Coach Unterreiner said. “That’s the difference this year to me is that we’re not saying, ‘Get the ball to him.’ We’re saying, ‘Just play. Whoever gets the good look — knock it down.’ That’s kind of been the fun of this summer, and I knew with this group coming in. I’ve seen them play since they were freshman and even before that.

“They’re really an unselfish group that just wants to win. When you can put egos aside and just say, ‘Let’s make sure we’re the higher number on the scoreboard at the end of the day,’ good things tend to happen. That makes being around them really enjoyable.”

Along with shooting the ball well, Coach Unterreiner also feels like his players do a great job moving around on the court. He knows the key to this season will be running schemes and having the offense be more precise. “We have to have a purpose for everything we do, and if we can do that we’re going to be all right.”