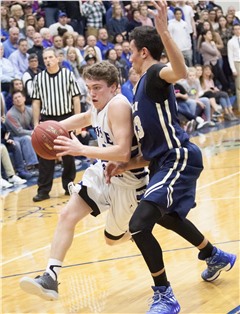 The No. 2 seeded Bulldogs jumped out to an early 10-0 lead over the No. 7 seed Panthers as senior Dawson Dohogne recorded six of those points during the run to start the game.

Dohogne scored 11 of his 16 total points in the first quarter against Meadow Heights, with his final points of the quarter coming from three-point range after receiving a pass inside the paint from sophomore Kam Dohogne to extend their team’s lead to 18-2.

Kam Dohogne hit a shot from beyond the arc off nearly the same exact play before that. Dawson was able to dish  Kam the ball from his post position to make it 15-2.

Dawson Dohogne also finished a perfect 7-for-7 at the free-throw line for the Bulldogs as Notre Dame finished shooting 85 percent at the line compared to Meadow Height’s 55 percent.

Notre Dame held a 23-4 lead over the Panthers heading into the second quarter after junior Thomas Crippen converted a three-point play off the bench with 15.1 seconds left in the first.

The Bulldogs starting point guard sophomore Tyler Landewee did not score a single point in the first quarter, but he was able to draw a foul off a layup for two to score the first three points of the second.

Notre Dame also made its presence felt defensively as the team combined for three blocks and two steals in the second quarter before halftime with sophomore Tyler Parker recording two of the three rejections for the Bulldogs.

This allowed Notre Dame to extend its lead over Meadow Heights to 41-13 heading into halftime, but the Bulldogs defensive effort showed no signs of slowing down in the third quarter.

Landewee scored Notre Dame’s first points in the second half of a steal for a fast-break opportunity, which he finished with a layup to give his team a 30-point lead at 43-13.

After hitting his sixth free throw, Dawson Dohogne recorded a block and a steal. Junior Carter Dame recorded one of his three rebounds to lead to a Landewee score, and then Dame also recorded a steal to follow.

Landewee had another fastbreak play for two when he stole the ball, and then Dohogne recorded another steal to get the rock to Landewee for another score off a fastbreak play.

This gave Notre Dame its highest lead of the game at 51-15, but the Panthers were able to muster 10 points before the end of the third quarter, thanks to senior Trent Liley, who scored eight of his team-high 12 points in the span.

Notre Dame held Meadow Heights to under 30 to end the game and win 65-29 to head to the Final Four, where the Bulldogs face No. 3 seed Charleston, which is coming off a 80-65 win over No. 6 seed Advance.

Senior Mardareyon Clark notched a tournament-high 46 points in the win for the Blue Jays.