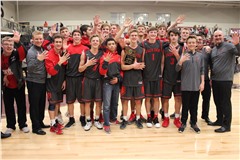 Jackson head coach Darrin Scott called a timeout following when sophomore Dominique Hardimon put the Mules up by three with a field goal after blocking and stealing a shot attempt.

Jackson’s offense took the ball down the court, and with only 4.6 seconds on the clock in the fourth quarter, junior guard Gavin Harris tied the game with a three to force overtime.

Shots from beyond the arc is what allowed Jackson to take an early 17-4 lead as the Indians made a total of four in that scoring run.

Those four 3-pointers were split between senior guard Jacob Friess and junior forward Pete Lake, who went on to combine for a total of 36 points in the game.

“Friess shoots it well — he just hasn’t had a lot of opportunities or gotten a lot of good looks in the last few games just because of our offense and the way it’s flowed,” Coach Scott said. “Tonight, he got two or three really good looks and knocked them down, which was huge.”

Lake only hit one more three while Friess connected for two more with his final of the game bringing Jackson within one point of Poplar Bluff at 66-65 with 1:45 left in the fourth quarter.

“It was crazy because we started off hot, and we’ve never shot that well — I’ve never shot that well in a game,” Friess said. “They came back, but it’s all about grit and heart, and I think that’s what led us to the victory. We didn’t give up, and Gavin Harris hit a big shot at the end. We wouldn’t have gotten here without working as a team.”

Heading into overtime, four minutes were put on the clock to try and decide a winner of the district championship. With 3:46 on the clock, Hester went to the free-throw line to put the Indians up 70-68 over Poplar Bluff.

Hardimon, the same player who put Poplar Bluff up by three points with a little over a minute to go in the fourth quarter, tied the game at 70-70 with 1:53 remaining.

Lake gave Jackson the lead a minute and three seconds later with a field goal of his own to make it Jackson 72, Poplar Bluff 70.

Hardimon drew a foul soon after to go to the free-throw line for two in an attempt to tie the game back up. He only made one of his two shots, though, and Lake rebounded Hardimon’s second shot for Coach Scott to call a timeout with 32.8 seconds left on the clock.

The same player that sent the game into overtime is the same player who put Jackson up by three after the timeout as Harris drew a foul to shoot for two.

Harris made both free throws, and Poplar Bluff missed its final shot attempt of the game for Lake to come up with the rebound.

Lake drew a foul on that drive to shoot two free throws and made one to put Jackson up 75-71 for the team to eventually win the game at 75-73 and claim its fifth-straight district title.

“[Winning a fifth-straight district championship] is unlike anything you’ve ever experienced — it’s a legacy thing,” Friess said. “You don’t really realize it till it’s the last minute, the clock’s running down and you’re winning. It’s unlike anything else.”

Jackson faced Poplar Bluff twice before this game with each team coming out on top for a win. Friess said Poplar Bluff matches up well against him and his team, which made for a difficult match with neither team knowing if they were going to win or not.

“They’ve got three guys who can really score a lot — [sophomore Marcedus] Leech, Hardimon and [senior forward Willie] Lucas Jr.,” Coach Scott said. “It makes it much harder to just focus on two guys, and last year we were lucky we could focus on two.

“We came out trying to play more [man-to-man defense], playing some zone and change up defenses to keep them off base. The start for us was huge. We got some good looks and knocked down some threes and played really well early to get the lead.”

Coach Scott went on to say even though Hardimon, Leech and Lucas shot well to combine for 56 points that his team was able to withstand that and get back to man-to-man defense at the end of the game.

Jackson now heads into familiar territory in the Class 5 State Sectional, which it won three years in-a-row from 2013 to 2015.

With the experience Jackson has gained over the last five seasons playing in the Class 5 State Playoffs, Friess thinks he and his team need to just play one game at a time.

“Don’t get too far ahead of yourself because if we look too far we are not going to play the game in front of us,” Friess said. “We’ve just got to play one game at a time, and we just want to keep playing the way we play.”

Coach Scott has the same mentality because following winning the district title, he said he and the team have to wait and see who won the Class 5 District 2 Championship to begin the process of getting ready for the playoffs.

“We will start on Sunday night talking about what we have to do to win like we would any other game,” Coach Scott said. It’s basically a two-game tournament — if you can win Wednesday, you’ve got a chance to go to the final four, and that’s what you are fighting for on Wednesday. That’s what we’ll hang our hat on.”