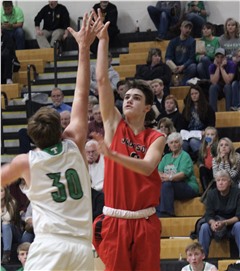 In the third contest of the Jackson boys basketball team’s four-game road skid, the Indians handed Cape Notre Dame its first loss since Jan. 4 by defeating the Bulldogs 60-51.

Notre Dame was riding a five-game winning streak with wins over Advance (No. 2 in Class 1), Park Hills Central and Saxony Lutheran.

Senior Dawson Dohogne put up a game-high 20 points for the Bulldogs.

Sophomore Kam Dohogne only managed 10 points in the game after he and Dawson combined for 55 points against Saxony Lutheran on Jan. 19.

The Indians led Notre Dame 33-19 at halftime, having scored 19 points over the Bulldogs 12 in the second quarter.

The Bulldogs nearly completed a comeback as they outscored Jackson in the second half, though, 32-25, to close the gap.

Second in scoring for Jackson was senior guard Pete Lake, who put up 14 against Notre Dame.

The Indians’ third-leading scorer was senior guard Desmond Harris, who scored six of his eight points from beyond the arc.

The Indians return home from their road trip on Friday where they will face Class 4 Farmington.

Last year’s game between Jackson and the Knights was decided by one point with the Indians winning 69-68 as Lake scored 28 points.