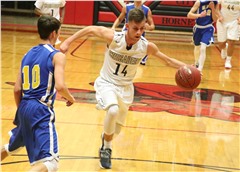 The Saxony Lutheran boys basketball team has already been without senior Andrew Jarvis due to a hamstring injury since December, but now the Crusaders are also without senior Jalen Williams.

In practice, Williams suffered a sprained ankle before Saxony’s game against Class 3, No. 7 Springfield Catholic on Saturday.

This did not stop unranked Saxony from upsetting the Fightin’ Irish as seniors Dewayne Giboney, Paiton Miller and Trae Robinson combined for 43 points, leading to a 53-48 win for the Crusaders.

Miller scored nine of his 14 points from three-point range, and Robinson scored 10 while coming down with nine rebounds and blocked three shots.