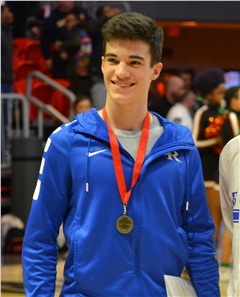 One never knows if a coach will come across a player who can easily be defined as the best they’ve ever had, but Oak Ridge boys basketball head coach Chris Trimmer certainly can.

It took 37 years for Trimmer to identify that player, who just happens to be junior David Layton. Layton has averaged 37 points, 11 rebounds, eight assists and five steals through 14 games, leading the Blue Jays to a 10-4 overall record this season.

“I don’t think ever in my entire life I had an athlete put up numbers like David’s putting up right now,” Trimmer said. “He’s brought a lot of attention to our program, and we’re just a little, tiny school. Honestly, we win based on the fact that I’ve got two or three kids [senior Brent Seyer, junior Zach LeGrand] who have to play extraordinarily well every night.”

In this year’s 16-team, 74th annual Christmas Tournament, Oak Ridge only played in three of the four days. Layton scored 96 points in that span and was voted by the fans in an online poll as the tournament’s Most Valuable Player. He was also named to the all-tournament team for a second-straight season.

Layton scored 36 points in the first round against Scott County Central, 30 against Charleston in the quarterfi-nals and lastly scored 30 against Delta.

Layton broke Oak Ridge’s single-game scoring record by putting up 52 points against Bell City on Dec. 11. The previous record was 49 points, which was held by Brett Thomas.

Oak Ridge took first in the Woodland Invitational to start the season as it won the first two games by 20 or more points and finally defeated Delta 76-69 in the title game, where Layton scored 39.

Coach Trimmer said when a player like Layton puts up the numbers he does that people would expect for him to walk around school bragging about himself. This simply isn’t the case with Layton.

“David never says a word,” Trimmer said. “He just comes to practice everyday, practices as hard as he can and asks me for extra gym time. He wants to consistently come in almost daily early.

“When we were off on vacation he wants to be in the gym seven days a week.”

In Trimmer’s first season as the Blue Jays head coach last year, the team went 15-12 overall and fell to Advance in the Class 1 District 2 Championship game. The Hornets fell to the eventual state champions Eminence in the quarterfinals.

As a sophomore, Layton averaged 24 points, six rebounds and seven assists per game to earn all-conference and all-district honors but failed to be named to the all-state team. Trimmer felt that Layton was snubbed from the list, which actually became something that motivated Layton.

Over the summer is when Trimmer noticed Layton completely transform his game after asking Layton if he would work out over the summer.

“I asked him to come in and put in some extra time, but I didn’t realize how much extra time he was really going to put in,” Coach Trimmer said. “We have an offseason weight lifting program where we lift four days a week. We would come in and lift from 7 to 8 a.m. Well, David would come in about 6:30 because I’d always get there early.

“He would get his lifting in and then from 8 a.m. to noon every single day he would work on his shot. Four hours a day he would take 100 shots from each of the five positions we want shots from on the floor.”

“Roughly about 1,500 shots to 2,000 shots every day over a four-hour period, and that was his entire summer,” Trimmer said. “People ask me, ‘What did you do to get David to this level?’ I didn’t do anything. David did everything. … I started coaching in 1982, and I’ve had some really, really nice players, but I’ve never seen anybody as dedicated as this young man.”