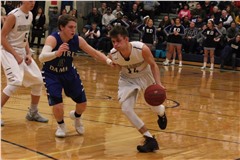 In this year’s game it was Saxony’s homecoming, but Notre Dame was able to upset the Crusaders once again with a 19-point, 84-65 win on Friday night.

This was the first time Notre Dame scored 80 or more points since the 2014-15 season when the Bulldogs defeated Dexter 80-56.

Bulldogs senior Dawson Dohogne scored a game-high 31 points along with nine rebounds and two steals. Last week against Advance on Jan. 15, Dohogne had a double-double with 28 points and 19 rebounds to lead Notre Dame to a 67-51 win.

“It’s not hard [to score 31 points] whenever my teammates make it so easy and get passes for me,” Dohogne said following the win. “Whenever Tyler [Landewee] would drive, he would dish it off to me. It’s as easy as that.”

Notre Dame head coach Paul Unterreiner said Dohogne has really started to take ownership of this team, and rightfully so since it’s his final season.

Coach Unterreiner said sophomore Kam Dohogne is feeding off of Dawson’s success, who was the team’s second-leading scorer with 24.

Landewee finished with a game-high 10 assists as well as seven points, five rebounds and three steals against the Crusaders.

“One of the big things that’s turned the corner for us is that Tyler Landewee’s understanding that it’s OK if Kam is scoring more,” Unterreiner said. “What [Landewee] doesn’t understand is he’s on the floor jamming all the time. That means a heck of a lot to me.”

Saxony seniors Paiton Miller and Jalen Williams combined for 45 points as Miller led the way with 26.