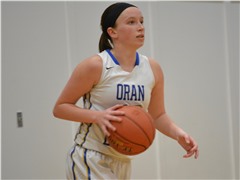 When someone checks the Missouri high school basketball record books to see who the all-time leading scorer is, they will see one name — Oran’s Leah Cauble.

Cauble, who started playing basketball in third grade, averaged 32.7 points per game through her high school career to finish with 3,788 points in 116 games.

One of the main reasons why Cauble decided to play basketball was because of her father, Dustin, who has served as her assistant coach for the past four years.

“It was sort of like, ‘My dad loves it, so I want to play it, too,’” Cauble said. “He’s helped me ever since day one whether it was being more aggressive when I was little or working on my jump shot now as a senior.”

The more time Cauble spent playing basketball growing up, the more she developed her own love for the game and realized it was one of the main things she wanted to focus on.

Cauble has wanted to play collegiately ever since she picked up a basketball, which she achieved before the start of this season by signing a national letter of intent with Division-II Union University in Jackson, Tennessee. Union advanced to the final four last year and fell to Central Missouri, which went on to win the national championship.

“[Playing college basketball] was a goal my dad and I had together,” Cauble said. “We’d go to these college camps over the summer — it’s just always something we’ve wanted me to do.”

“I visited [Union], and it sort of felt like home to me,” Cauble said. “I was like, ‘This is a decision I want to make because I love it so much.’ I just set foot on the campus, met the coaches and I instantly loved it. ‘This is where I want to go.’”

Cauble said she noticed a growth in her game when she moved to Oran in sixth grade. This was also when Cauble started to play with only girls since boys and girls play together in little league.

Players on these undefeated, championship teams along with Cauble include Jessie Long, Kaylee Payne, Claire Ramsey and Madison Ramsey. Long and Payne were the only two players to ever average 10 or more points a game while Cauble was in high school.

Cauble said one of the reasons why she loves basketball is because of the friendships she’s made through the sport, which helped create a bond that showed on the court.

“It’s meant a lot to play with them for this long, and I love them to death,” Cauble said. “It’s going to be really sad when we’re done, but I don’t know — it just makes it more fun when you’re playing with your best friends.”

During their freshman year, Cauble averaged 25.5 points while also dishing out 4.9 assists per game. Long paced Cauble with 9.9 points a game, but she did record a team-high 7.7 rebounds.

She finished with a total of 689 points, which ranks third all-time among freshman behind Sierra Michaelis (781) and Hannah Wilkerson (746). The Eagles finished 23-4 overall Cauble’s freshman year as they fell to eventual state runner-ups Naylor in the Class 1 Sectionals.

Cauble and company also made their first and only appearance in the state final four, where Oran finished in fourth place after falling to second-place Adrian in the semifinals and Scotland County in the third-place game. However, the Eagles did post their best record in the past four seasons at 27-5 overall that year.

“[Playing at state] meant a lot to me — it was something my team and I worked for the whole season,” Cauble said. “It just meant a lot to us, and it was one of the most fun experiences I’ve had playing basketball.”

One of Cauble’s drives to improve as a player each offseason was to reach the final four and win a state championship, but Oran came up short of that her final two years in the quarterfinals.

Basketball has helped teach Cauble plenty of lessons, but the most important is probably that people always do not get what they want in life.

The Eagles finished 23-5 overall Cauble’s junior year as she averaged 35.1 points and finished above Long in rebounds with 7.9 per contest. She came 18 points shy of reaching 1,000 points.

Cauble knew breaking the Missouri all-time scoring record was a possibility when she reached 3,000 points at the First State Community Bank Holiday Classic.

“That’s when I realized, ‘Hey, I have a shot at this,” Cauble laughed. “[Being the all-time leading scorer in Missouri] means the world to me because I know there’s a lot of talented players from Missouri.”

Cauble shattered Wilkerson’s record of 3,724 career points by a total of 64 with Michaelis behind them both at 3,710. Fred Johnson, who played high school basketball in the 1980s, is the all-time leader in boys history with 3,552 points.

Cauble averaged 36.5 points in 29 games this season to score a total of 1,059 to break her personal best she set as a sophomore. Cauble also came down with 5.9 rebounds, 3.5 assists and 3.1 steals. Oran fell to Thayer in the quarterfinals for Cauble’s high school career to come to an end.