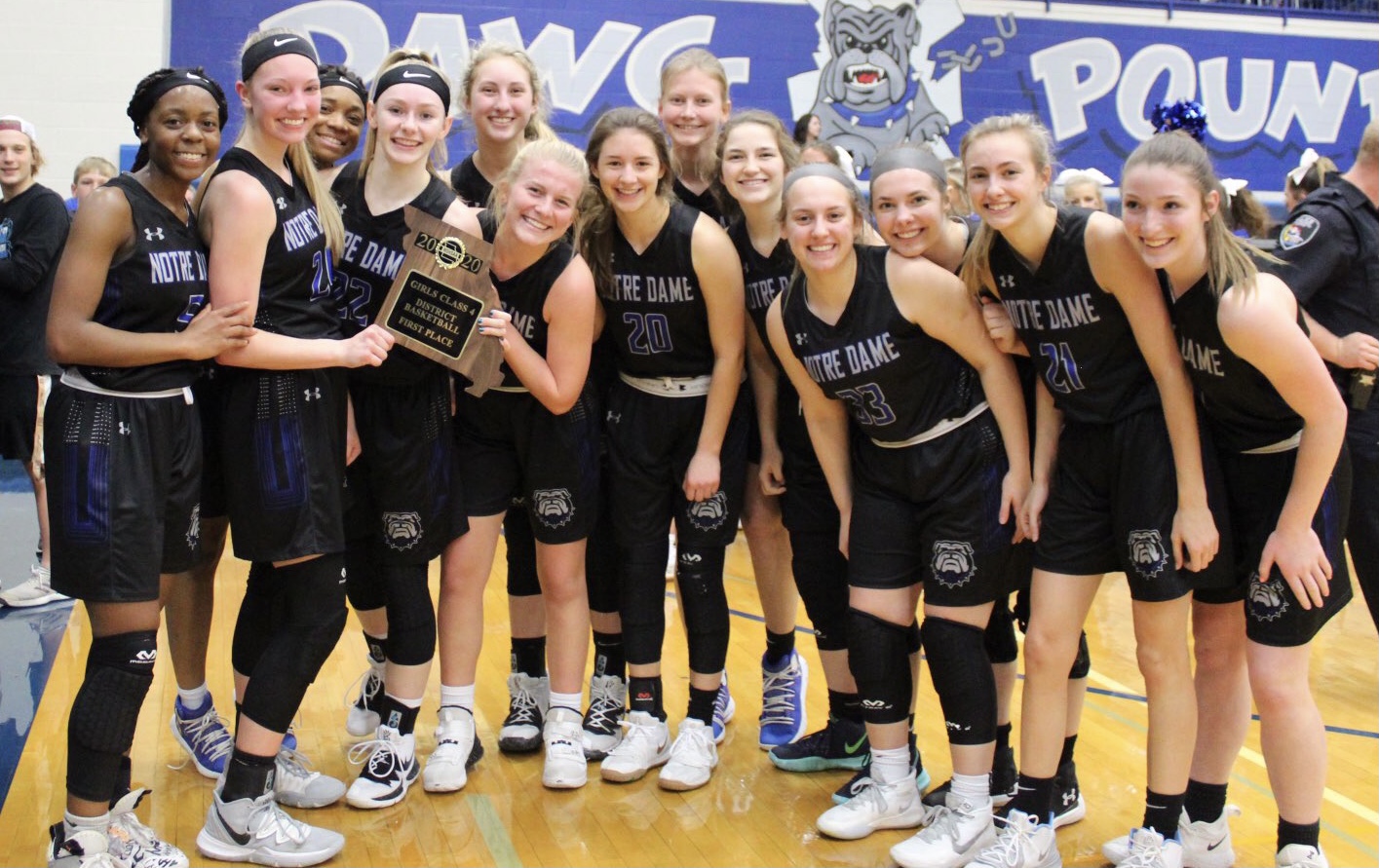 For the first time since 2007, the Cape Notre Dame boys and girls basketball teams were able to win a district championship in the same season last week.

Both Class 4 District 1 Tournaments were hosted at Jerry Grim Court as the boys team (24-4) earned the No. 1 overall seed, while the girls (23-4) were seeded second in their respective district.

The district championship for the girls tournament was held on Thursday night as the Bulldogs hosted No. 1 seed Ste. Genevieve, which entered the matchup with only one loss.

Notre Dame only held a 12-11 lead over the Dragons (25-2) after the first quarter, but Bulldogs sophomore Lexi Rubel was able to erupt with eight points in the second after only scoring one bucket in the first. Two key shots for Rubel before halftime included a pull-up 3-pointer, followed by a buzzer beater for two, which gave Notre Dame a 30-13 lead heading into the locker room.

On top of Rubel’s eight points, the Bulldogs defense was also vital as they only allowed Ste. Genevieve to score two points in the second after Notre Dame adjusted to the Dragons speed. The Bulldogs were able to slow down Ste. Genevieve by not letting ball handlers get out of their trap strategy, and they also kept defenders in the back to not allow any Dragon to have an easy trip to the lane.

Defensively, Rubel was also able to haul in a game-high 19 rebounds and finished the contest with 14 points for a double-double.

“We started locking down on defense more, and our defense created more layups,” Rubel said. “Once the layups started to fall, the other shots started falling.”

Notre Dame’s defense also only allowed one player for Ste. Genevieve to score 10  or more points as junior Maci Reynolds led all scorers with 18 and hit three 3-pointers.

Rubel scored four more points in the second half off free throws as Notre Dame held on to its halftime lead and defeated Ste. Genevieve 52-32 to win the Class 4 District 1 title for the second-straight season.

Pacing Rubel in the scoring column for Notre Dame were guards junior Delaney Dohogne and senior Emily Kellum, who combined for 17 points by recording nine and eight respectively. Dohogne and Kellum also tied for a team-high three steals with sophomore Leah Jansen.

Two other Bulldogs combined for double digits as freshman Tori Rubel and junior Allie Burnett each had five points. Rubel also finished the game with four rebounds and two steals.

On the following night, the Notre Dame boys team was tasked with defeating No. 2 seed Cape Central (22-6) for the third-straight time after being victorious over the Tigers twice already during the regular season.

Central ended the Bulldogs season in the district semifinals one year ago after tying the game with 0.4 seconds left in the first overtime. The Tigers ultimately defeated Notre Dame 45-44 and went on to win last year’s Class 4 District 1 Championship.

Friday night’s game ended up being just as exciting but this time in favor of the Bulldogs, who came away with a 38-37, double-overtime victory for Notre Dame to win its first district title since the 2014-15 season.

The game was tied 35-all at the end of regulation and until the second overtime, but senior Tyler Landewee seemingly made a buzzer-beating shot in the final seconds that would have given his team the win. However, one of the referees said Landewee did not get the shot off in time.

“I told our team before the game, ‘This could be the last one, so put it all on the court,’” Landewee said. “I’m telling you, every single one of them put it on the court. I just happened to be the one to make that big play at the right time, but it was all of them. They picked me up after I was having a rough first half.”

In a low-scoring affair, Landewee had only hit one shot in the first three quarters, which was a triple in the second. Fellow senior Justice Thoma only managed to record two points in the entirety of the contest.

Making up for the lack of scoring was junior Hayden Jansen, who hit three shots from beyond the arc in the first three quarters while coming off the bench.

With 7.8 seconds left in double overtime, Landewee hit the game-winning shot off a 1-and-1 free-throw attempt after missing his lone try from the line earlier in the final four minutes.

Both teams will face Park Hills Central in the sectional round this week on Tuesday.