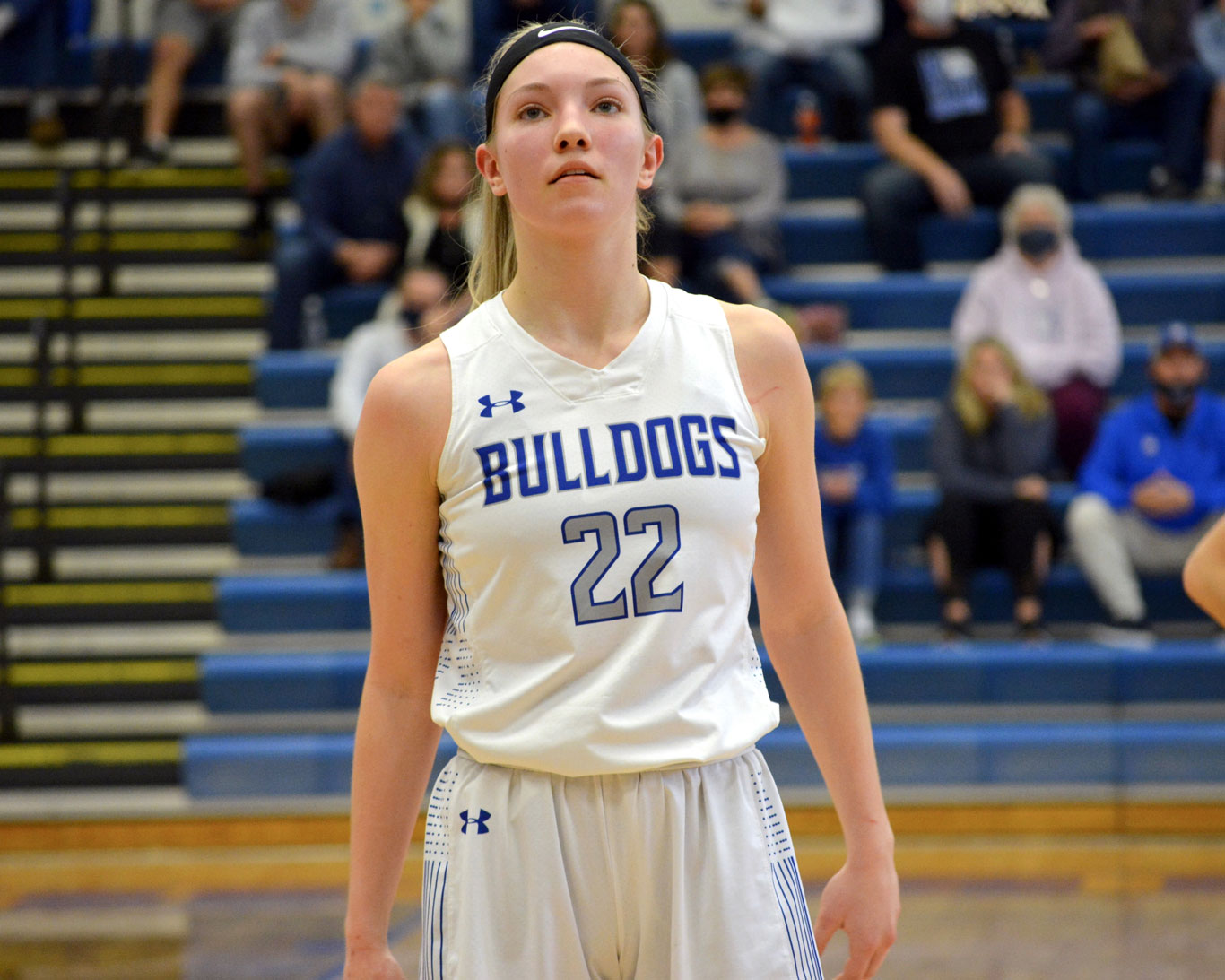 Last week, Notre Dame junior Lexi Rubel made history for the girls basketball team by being the first Bulldog to be named all-state twice in 10 years. The last player for Notre Dame to earn all-state two times was Allyson Bradshaw in 2011, who went on to play for Southeast Missouri State.

Rubel, who has been offered by SEMO as well as Austin Peay and Southern Illinois to play college basketball, was named to the Missouri Basketball Coaches Association Class 5 All-State Team after leading the Bulldogs in points, rebounds, assists, free throws and tying for first in steals and 3-pointers.

To finish with a team-high 16.3 points per game average in 2020-21, Rubel averaged 20 points in her team’s last seven contests along with having eight 20-point games. Lexi’s season-high scoring total was 29 points (career high) as the only other Bulldog to score 20 or more in a single game was her sister sophomore Tori Rubel, who produced a career-high 22 this winter.

Rubel tied with fellow junior Kristin Edmonds for the most threes on Notre Dame as they each hit 29 shots from beyond the arc this season. Rubel knocked down multiple 3-pointers in 10 of the 22 games she played as she made three triples in four of those contests.

Rubel is also on pace to become the Bulldogs all-time leader in rebounds (199 till record), assists (35) and steals (79). Rubel came down with 205 boards (9.3), dished out 76 assists (3.5) and made 53 steals (2.4) while missing two games this winter. Notre Dame also played in five less games this season than it did in Lexi’s first two campaigns.

Rubel recorded 10 or more rebounds in nine games as her season-high total was 16. She finished with multiple assists in all but one of the 22 games she played as she had four or more in 11 contests (season high was eight).

Defensively, Lexi recorded two or more steals 13 times with four-plus takeaways in eight of those games and had a season-high eight in the Bulldogs 50-38 win over New Madrid County Central Dec. 3. While Rubel paced her sister Tori’s career-high 22 points with 11 in that win, she also finished with 11 rebounds and five assists.

On top of her individual performances, Rubel helped the Bulldogs win their third-straight district championship and reach the quarterfinals for the third year in a row. The Bulldogs had not won three consecutive district titles since 2004 when the program was on an eight-year streak as district champions.

The only other Bulldog to be named all-conference, all-district (two-time) and chosen to the Holiday Classic’s All-Tournament Team besides Lexi was Tori Rubel.

Tori Rubel is on pace to join Lexi in Notre Dame’s 1,000-point club after averaging 8.8 points and 4.3 rebounds in the 19 games she played. Tori had to miss five-straight games in January, but before that she was having an all-state caliber campaign herself with averages of 15.4 points, 7.0 rebounds and 2.4 steals per game.

Lexi and Tori will play in their final season of high school basketball together next winter with hopes of making it back to the final four, which they advanced to last season but didn’t get to play in because of the coronavirus pandemic.