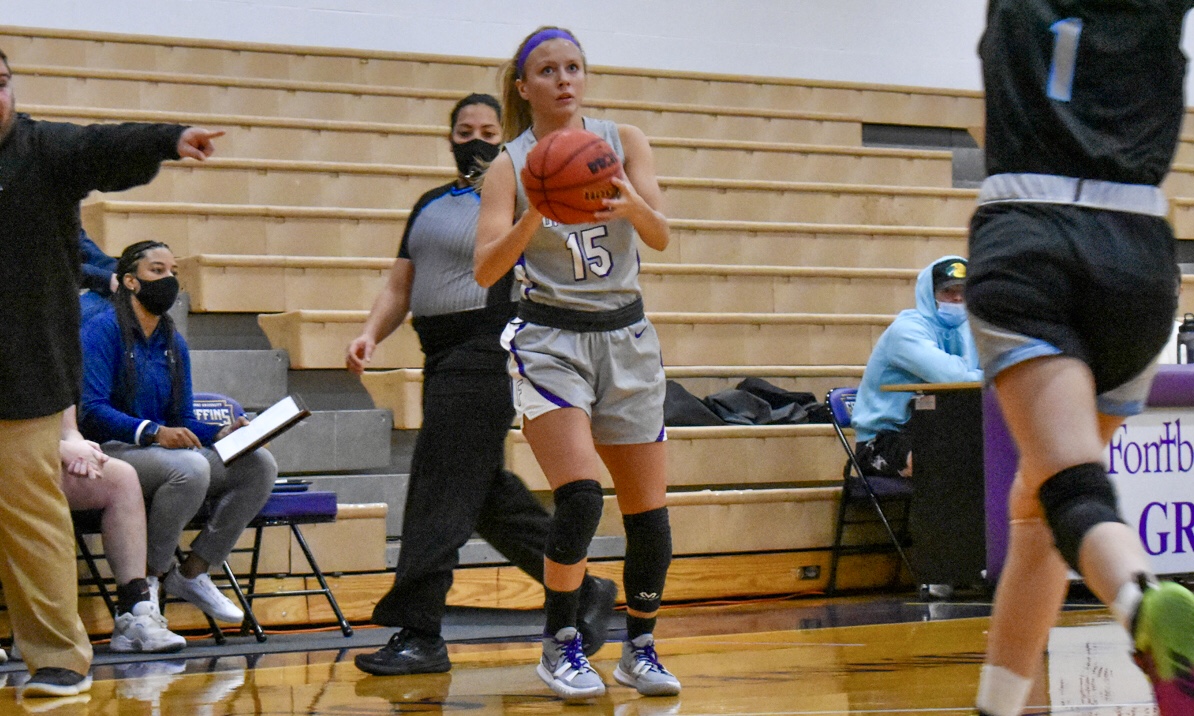 Rylee Stafford (Fontbonne) ended her collegiate athletic career by being named the inaugural SLIAC Female Athlete of the Year. Stafford, who played both basketball and soccer at the Division-III level in college, graduated from Jackson in 2017. Photo by Tony LaRocca

Following her final season as a member of both the Fontbonne women’s basketball and soccer teams, Rylee Stafford officially earned the title as the inaugural SLIAC Female Athlete of the Year.

“It was pretty amazing to earn that honor — I’ve been at Fontbonne for the past five years,” Stafford said. “It feels good to know that they recognize players who are working their butts off basically. I played basketball and soccer while being a full-time student for five years, while also working. The fact I could win that just makes it all worth it.”

People who are former college athletes themselves describe playing a sport at the college ranks as like having a full-time job.

However, Stafford’s schedule of always having something to do simply became the norm for her.

What a normal day for Rylee as a college athlete looked like would be waking up early for practice, going to classes, doing school work and then going to work as a coach at an indoor soccer complex called Vetta Sports.

“I always had something going on all week long just doing everything,” Stafford explained. “This past year, our soccer team went to the NCAA Tournament in Iowa. Unfortunately, we lost our game, but after it I texted my basketball coach and was like, ‘I’ll see you tomorrow.’ I played a basketball game that following day.”

This mentality began at Jackson, where Stafford was a 1,000-point scorer for the Indians girls basketball team and helped the girls soccer program win its first of current five-straight district championships.

On the basketball court for the Griffins, Stafford finished her career as Fontbonne’s all-time leading scorer (1,744 career points) and 3-point shooter (298 made in career). She was also the program’s first-ever Jostens Trophy finalist this season, which is awarded annually to the Division-III player of the year.

This past fall as one of the soccer team’s standout defenders, Rylee led Fontbonne to win the SLIAC Regular Season and Tournament championships. Stafford scored and tied her previous career-high record of two goals, along with her duties on defense.

In Rylee’s final four seasons with Fontbonne basketball, she averaged more than 15 points per game and produced a career-high average of 20.5 points each contest this past winter. Stafford scored 20 or more points 17 times and had one 30-point game over 24 contests.

“I wouldn’t be able to accomplish anything I have without my basketball coach Michael Fitzgerald and then my teammates for sure,” Stafford said. “My coach let me come in early before every practice to shoot, and he would stay after practice to shoot with me. He gave me the most support, and he’s definitely the reason I was able to do what I did.”

Putting up shots before and after practice paid off big for Stafford as she led all D-III shooters in 3-pointers made per game at 3.96 for a program-high total of 95 this winter. Rylee finished hitting 35.4% of her threes, and she knocked down 80 triples (35.1%) back in 2019-20.

In all but one game during her final season, Stafford hit multiple 3-pointers and made seven threes on three different occasions. One of those games was when Rylee scored a single-game, career-high 37 points in a 90-53 win over Mississippi University for Women at home Dec. 13.

“College is a different level — the shot clock was a big deal,” Stafford said. “It was definitely something I had to get used to. It would get down to 10 seconds, and I’d be like, ‘Oh my gosh — we have to do something!’ It’s also more competitive because you’re with players who were the top player for their high school team as well.

“Being around those other players similar to you improves you. … I practice my 3-point shot a lot, so that was definitely my secret weapon. We all had our own secret weapon, so we all understood what our strengths were.”

To be a successful shooter, Stafford, who made 33.2% of her 3-point attempts, said players can’t worry about missing the next shot if they missed the one before. Rylee stated the mentality shooters must have is, “I’m going to shoot this, and it’s going to go in. You have to have complete confidence in yourself.”

Like all basketball players, there were certainly times when Stafford would get in a “shooter’s slump,” but she said her coach would be there for her and help her work on not feeling that way. “You have to have that confidence because if you don’t, you’re going to fall into the slumps more than not.”

Moving back to soccer, Stafford started 71 of the 84 games she played in her career for a Fontbonne team that recorded 11 shutouts her senior year. In the SLIAC Tournament, the Griffins outscored their opponents by a combined total of 7-0 through two games to sweep the conference.

Fontbonne ended up losing the opening-round game of the national tournament to Loras by only one goal at 1-0. Loras advanced all the way to the final four and lost to the eventual D-III National Champions Christopher Newport 1-0.

“I’ve always loved soccer, and I’m really glad I got to continue playing it along with basketball,” Stafford said. “Being a defender, you don’t get all the glory. You’re kind of behind the scenes, and I almost love that because I know what it means to be a defender. I’ve always said defense wins games, so we have a hard job, but it’s definitely a rewarding job.”

What Stafford misses the most about not playing sports competitively anymore is she’s no longer in a competitive setting. Maybe to one’s surprise, Rylee also said she misses the early-morning practices and workouts.

“Just going in and getting a workout — it’s hard graduating from college and being a retired athlete because then you don’t have your teammates and coaches to push you,” Stafford said. “You have to motivate yourself, so that’s been a big change for me, too, just staying active.”

Now that Rylee is “retired,” she said she has a lot of time on her hands and doesn’t know what to do with it. Stafford has kept her job at Vetta Sports, though, and remains in the St. Louis area.

Through Vetta Sports, Rylee works full-time as the instructional soccer league coordinator, where she manages a team of staff and coaches. She primarily helps people on how to coach today’s youth and helps teach soccer as well, of course.

“To have a job where you get to stay involved with sports and teach today’s youth about sports — just sharing your love of the game with them — that’s super rewarding,” Stafford said. “I love it.”