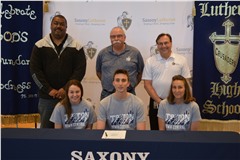 For Saxony Lutheran senior Austin Jarvis, signing a letter of intent to play basketball wasn’t one of his goals, but he did so April 27. Jarvis signed with Iowa Central Community College to continue his basketball career since he wasn’t going to reject the scholarship they offered him.

Saxony boys basketball head coach Kevin Williams contacted one of Iowa Central’s assistant coaches about Jarvis. The head coach, Dennis Pilcher, then became interested in Jarvis, who visited with him and asked if Jarvis would play for him.

“‘I’ll think about it,’” Jarvis said. “[Pilcher] said, ‘How about if I give you a scholarship?’ I jumped right on it and took the deal.”

Before this opportunity arose for Jarvis, he was playing basketball at Bismarck, where he eclipsed 1,000 points through three seasons.

Jarvis transferred away from Bismarck to Saxony simply because he didn’t like it there. He also realized he had a good opportunity waiting for him at Saxony.

“It’s been the best year of my life so far,” Jarvis said. “This school already had a great team last year, and they were coming back with a bunch of kids that were awesome. I didn’t know what it was going to be like honestly coming in here with a bigger, stronger team that loves to play basketball. With Bismarck not having any wins and not playing the toughest competition, I was kind of intimidated a little bit.”

Jarvis put all of that aside, though, as he approached the season with a work-hard attitude, which led to Saxony winning its second-straight Class 3 District 2 Championship.

Jarvis also said he did not have that much knowledge of the game of basketball before coming to Saxony. He said Coach Williams and assistant coach Chris Crawford took him under their wings and showed him the ropes.

Heading into college, Jarvis said he is going to focus on gaining weight and muscle while also working on his shooting.

Jarvis said one big concern for people going to college is how far away from home they could be, but he doesn’t think that will bother him.

Jarvis said he is looking forward to the overall experience as well as not waking up at 7 a.m. for classes.