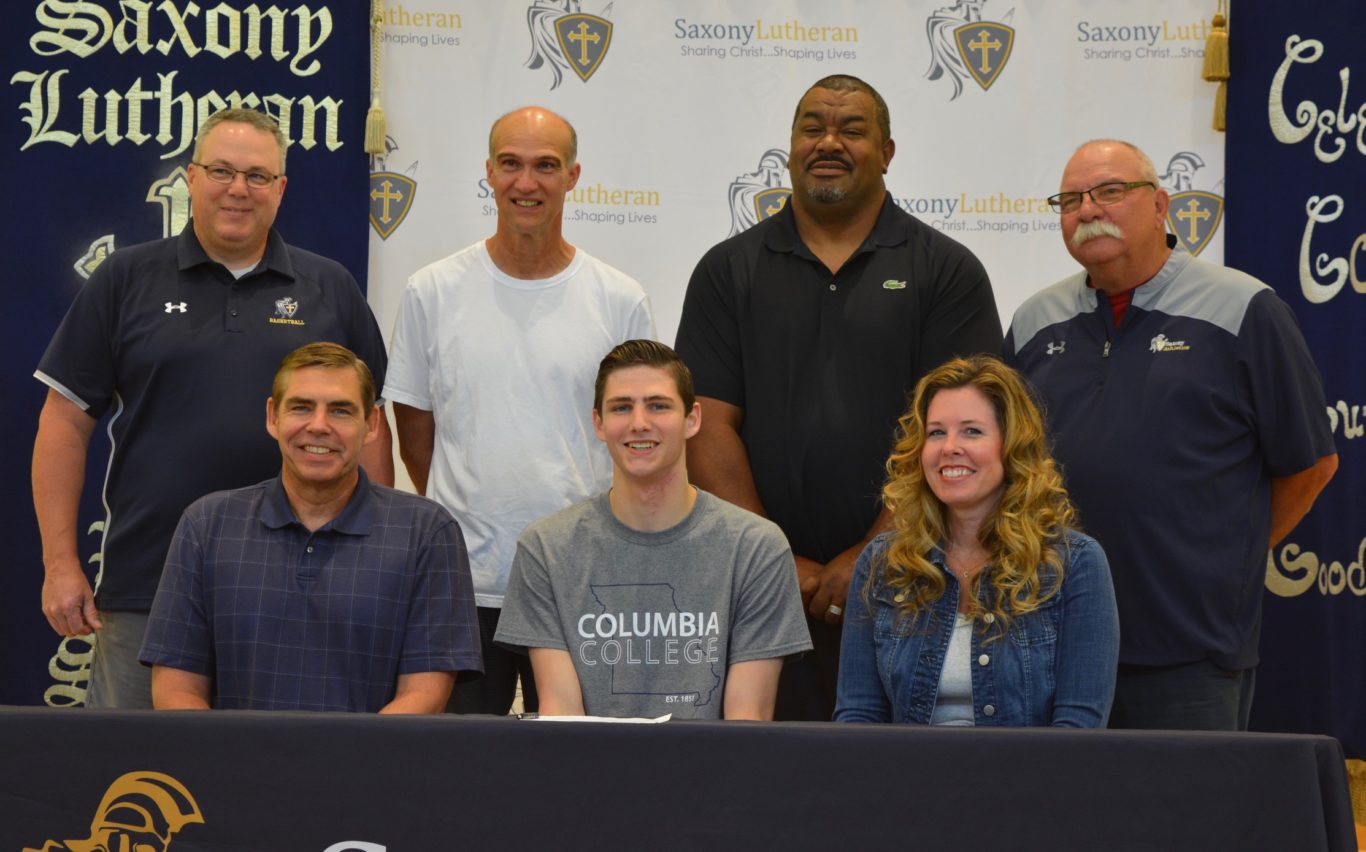 Before Saxony Lutheran basketball’s 2020 graduate Andrew Schwarting became a two-time all-district selection and signed with Columbia College to play at the next level, he was mentored by former Crusaders such as William Rogers and Corie Williams his freshman year.

In the 2016-17 season, Schwarting witnessed Rogers and Williams lead Saxony to its best season in school history with a program-record 26 wins while the Crusaders also won their first district championship in six seasons.

The Crusaders historic year came to an end in the Class 3 quarterfinals at the hands of Whitfield, which advanced to the state championship game. Rogers and Williams both garnered all-district honors as Rogers even signed with Lewis and Clark Community College after the season.

“They helped me succeed and showed me the right way to do things and set an example for me,” Schwarting said. “I really think that translated throughout my four years, so when I was a junior and senior I pushed the underclassmen to succeed.”

Schwarting said the biggest lesson he learned from Rogers and Williams was to push himself as much as possible in whatever he was doing. “If it’s a sprint, be the first one or go the fastest you can. Work your hardest and that work in essence translates to the games.”

Schwarting also learned to never take anything for granted because athletes have to work constantly in order to be successful.

In Schwarting’s sophomore season, Saxony went on to win the district title again as the team finished 22-8 in the program’s third year under now former head coach Kevin Williams.

Williams’ stint with the Crusaders came to an end after he decided to step down following the first three games of Schwarting’s junior season. Saxony finished its worst record in program history at 2-23 overall in 18-19.

Despite not having the best record, Schwarting still managed to be the bright spot for the Crusaders by earning all-district honors after averaging a team-high 18 points and 5.2 rebounds per game.

“Even the junior year, I felt like we as a team really tried to come together and just play the best we could,” he said. “Whether that’s two wins or 10 wins, I don’t think you could ever say, ‘Saxony gave up.’ We were always known to fight to the end, and I think we really embraced that my senior year under the great leadership of Coach [Justin] Callahan.”

With Callahan at the helm during Schwarting’s final and senior campaign, Saxony got back to double-digit wins with an overall record of 10-17 and reached the Class 3 District 2 semifinals. In the semifinals, the Crusaders fell to eventual district champions Scott City, 59-36.

The 6-foot-6 forward Schwarting was named all-district once again after improving on his averages by finishing with a team-high 19.5 points and 7.8 rebounds per game. Schwarting also shot 77.8% at the free-throw line while making 39.8% of his 3-point attempts.

“I’ve always been drawn to programs where I can play on the perimeter because for my size, I have a lot of guard skills,” Schwarting said. “I know we have some guys coming in for Columbia in my grade Carson Parker who’s 6-foot-8 and 220 pounds. I’m looking forward to playing with him because I’m wanting to play on the wing outside, and I can get him the ball — I can pass.

“I’m really looking forward to expressing that area of my game even more in college because in college people get bigger. Me being able to play on the outside and at the same time coming in, [passing] is where I’ve always excelled.”

In the past 10 seasons, Columbia has advanced to the NAIA National Tournament eight times along with winning six American Midwest Conference Championships. The Cougars head coach is currently Tomas Brock, who took over for the program’s most winningest coach Bob Burchard (788 wins through 30 seasons) in 19-20.

Columbia finished with an overall record of 20-12 and reached the conference tournament semifinals this year, where the team fell to No. 1 seed Central Baptist 90-80.

“I was always in search of a good fit for me, and [my family and I] prayed a lot about it,” Schwarting said. “I felt like [Columbia] is where God was leading me, and it just seemed like everything fell into place with them. [Their success] was a big draw for me — knowing I’m going somewhere that has a good culture.”

As for Schwarting and the Crusaders this past winter, he attributes their success to Coach Callahan. Schwarting said Callahan had the team focus on culture as well as creating a close bond to where they felt like they were competing for a district championship again.

“I couldn’t ask for a better high school basketball coach,” Schwarting said. “He’s been a great mentor and father figure for me. He’s always in the halls talking to us all and showing us the right way to do things. I’m very appreciative of him coming in here embracing us and loving us as his team — it means a lot to me.”

During the coronavirus pandemic, Schwarting has primarily been doing individual workouts with focuses on ball handling, and he’s also been hitting the weight room. Schwarting admitted he wasn’t as strong as he would’ve liked to have been this past season.

Something Schwarting has had to deal with most of his life and playing career is being a Type 1 Diabetic as there are times on the court when he can tell if his blood sugar is off. However, Schwarting said he is able to sit down and “get things figured out” usually within five to 10 minutes.

“My diabetes has made me mature more quickly and driven me to succeed and show other people with these illnesses that just because you have this doesn’t mean you can’t succeed,” Schwarting said. “I’ve always tried to live by that, and it’s really helped me out.”

Being a diabetic has also led Schwarting to pursue a career in medical sales as he will study business and marketing during his time at Columbia. What Schwarting eventually hopes to do is market diabetic devices as well as sell and show the public how to use them.