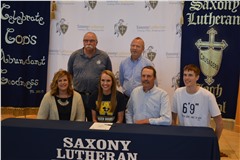 Senior Addison Beussink became the second player from this year’s Saxony Lutheran girls basketball team to sign a National Letter of Intent to play at the next level.

Beussink signed with Webster University, a school she has wanted to attend since she was little.

Webster’s women’s basketball head coach Chris Bunch, who has been at the helm for 15 seasons, started recruiting Beussink last season when she first became a starter.

She averaged 9.3 points and 7.7 rebounds per game while being named to the Class 3 District 2 All-District team in the 2016-17 season.

“I just knew he really wanted me [to play basketball for him] because he stayed in contact,” Beussink said. “The school is really good academically, and they have what I want to major in [sports management], so that’s part of it, too.”

Beussink, who led the Crusaders in points (13.7), rebounds (9.1) and blocks (1.4) per game, garnered top honors this season by being named Class 3 All-State.

She was the only Crusader named all-state this season as fellow senior Laurel Mueller earned the honor last year.

“I’m just really thankful,” Beussink said. “I’m thankful that I worked with Southeast Dynasty this summer. [Southeast Dynasty head coach] Don [Osborn] was able to help me get to that point to make me better.”

The offseason work Beussink put in also helped her lead Saxony to a sixth-straight Class 3 District 2 Championship, a streak that became the motivating factor for this senior class.

“It’s super exciting [to have been able to continue the streak],” Beussink said. “The upperclassmen — Masyn, Laurel, Courtney [Kester], Callie Brown and I — knew we were going to have to step up because we had big shoes to fill. I think we did that.”

Beussink said she is thankful for the four other seniors in this class, which she has spent countless hours playing basketball with over the past four years.

“We were a close-knit group, and we all got along pretty well,” Beussink said. “I think that helped us get to where we got to.”

In her junior and senior years, Beussink and the Crusaders were one game away from making it to the Class 3 Final Four. Saxony fell to Whitfield in the quarterfinals back-to-back seasons.

Overseeing it all has been Saxony head coach Sam Sides, who said Beussink along with the other seniors really matured over the last two seasons.

“I’m really happy for [Beussink] because she has a love for the game,” Sides said. “She improved from one year to the next with about as big of a leap than anybody I’ve had. She’s become a lot more aggressive than she was earlier in her career, but she just matured.”

Heading into college, Beussink wants to move to a guard position rather than staying inside playing center like she did for Saxony.

Before the 2017-18 season, Coach Sides said Beussink wanted to play away from the basket to develop her skills there. He said he needed her to play inside because of her ability to rebound and block shots, something he foresees as a difficulty to replace for next season.

“She needs to improve her outside game — she wants to be a more complete player and not just a one-dimensional player,” Sides said. “She has good mechanics with her shot. She just needs to get more repetition and work on that part of her game and taking the ball to the basket off the dribble and stuff like that.”

Beussink first stated she needs to improve her overall strength and then focus on her ball handling to play on the outside heading into college. She said she played at forward instead of center for Southeast Dynasty during the summer.

Coach Sides said Beussink has an unorthodox shooting style inside, which is sometimes the reason why she misses a shot. He continued to say her shot is also very difficult to defend because its hard for defenders to keep Beussink in front of them.

“[Beussink] can slide by you and shoot around you so well with her long arms,” Sides said. “She’s going to continue to work and try to develop more of a game. She’s not done yet and still has a couple more years of development coming up. She’s one of those girls as she gets older she’s going to get better and better.”

Beussink said she is thankful to have had Sides as her head coach the past four years where she’s learned about both basketball and life.

“[I’m thankful] for how much he has helped me,” Beussink said. “He can be rough sometimes, but I know it’s just for my benefit. [Playing basketball here] has taught me to always overcome adversity. Life is going to throw a lot of stuff at you, but you just have to overcome it.”