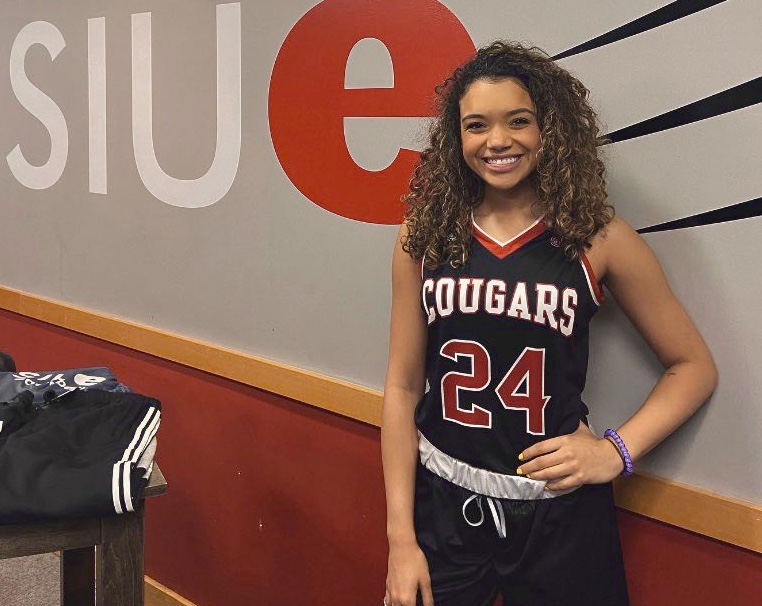 High school basketball fans in Southeast Missouri will be seeing a familiar face once a year at the Show Me Center starting next winter. This is because former Saxony Lutheran Crusader Masyn McWilliams is now a member of the Ohio Valley Conference.

“The recruiting process at MAC was definitely different than it was at Saxony for sure,” McWilliams said. “I had some other schools calling me, but SIUE kept on me — they almost wouldn’t leave me alone. It kind of reminded me of Coach [Gary] Koch actually, so I love that energy. That’s why I decided to give them a chance.”

Upon her visit at SIUE’s campus, McWilliams was thoroughly impressed with the school and basketball program’s coaching staff, which is led by eight-year head coach Paula Buscher. The Cougars have made six OVC Tournament appearances under Buscher.

During her time playing junior college basketball at MAC, McWilliams became a two-time All-Region 16 selection and even finished second in Region 16 Player of the Year voting this past season. McWilliams also garnered NJCAA Division-I All-American honorable mention honors this year.

The Cardinals finished with a combined overall record of 41-18 the last two years with McWilliams in the starting five.

McWilliams said everyone she played with at MAC had a winning attitude and strove to capture the Region 16 Championship. The Cardinals came up short of doing so, but McWilliams is still proud of the attitude and effort her team displayed.

McWilliams developed her winning mindset while playing for Saxony head coach Sam Sides in high school, who retired following this season. The Crusaders won eight district championships in a row with Sides at the helm as McWilliams was there for four of them along with playing for the 2015-16 Class 3 State Championship.

SIUE only managed to win three of 29 games with a 1-17 record in OVC play this winter, and McWilliams is looking forward to being one of the pieces that helps bring the program back to success. Before this season, the Cougars had won 11 or more games the last seven years.

“I know this year was kind of a fluke,” McWilliams said. “They’ve talked to me a lot about how their recruiting process is completely different. I know they want me to come in there and be that force — to keep up what I’ve been doing at MAC. I think next year we’ll be successful, and I’m excited because I’m coming in there with that winning attitude.”

McWilliams led MAC in scoring with 19.5 points per game after finishing third overall with 11.1 PPG as a freshman when she was on the team with current Robert Morris forward Holly Forbes. In 2018-19, Forbes averaged a team-high 16.5 points and 10.4 rebounds a game en route to being named Region 16 Player of the Year.

McWilliams spent much more time in the gym during the offseason heading into her sophomore year because she knew it was going to be her last season with the Cardinals. During that time, McWilliams focused on things like finishing layups through contact as well as her free throw and three-point shot.

“[Leading the team in scoring this year] was honestly a shock to me,” McWilliams laughed. “I didn’t really come in with the mindset that I had to score more necessarily. We were missing Holly Forbes, who was such a force on last year’s team. When somebody leaves, you have to replace them somehow and it ended up being me.”

On top of nearly averaging 20 points per game this season, McWilliams also finished with 4.9 rebounds and a shooting percentage of 47.9. She also shot 67.7% from the free-throw line and hit 33.3% of her triples.

McWilliams was fourth in rebounds for MAC as fellow Cardinals sophomore Rionne Papa (7.8 RPG), sophomore Tyeshia Mitchell (6.4) and sophomore Keanna Williams (5.7) finished ahead of her.

“College is more physical than high school, so it really wasn’t me thinking about it, it was just me doing it,” McWilliams said. “I want to be the aggressor, so I have to be more aggressive than the person next to me.”

One of the things SIUE’s coaching staff admired the most about McWilliams is her ability to produce points, and she established herself as a top fast-break scorer during her time at MAC. SIUE appealed to McWilliams because she wanted to play for a school where she could make an immediate impact.

At MAC, head coach Gary Koch told McWilliams she needed to focus on getting off more shot attempts, which is something she hadn’t taken as seriously at Saxony.

“That along with the way [Koch] coaches, and he kind of lets you do your own thing up until the point that it’s not working,” McWilliams said. “Then he’ll kind of reel you back in, but he really just lets you loose. He’s a good guy, and he really guided all of us.”

McWilliams’ final year at MAC was also Koch’s final season coaching the Cardinals as he has now entered retirement after leading the program for 14 years. During his time, Koch has had 22 players go on to play at the Division-I level including McWilliams, which was her goal all along.

“We had a really close bond this year — he made me step up and be a captain,” McWilliams said. “That’s a little out of my comfort zone, so he really coached me through that. To be able to be one of the last players he coached means a lot to me, and I know I’m going to hold a special place in his heart as he is in mine.”

McWilliams has still not been able to wrap her head around the fact she will be attending a new college next year instead of returning to MAC.

McWilliams will miss playing with some of her MAC teammates like fellow sophomores Keanna Williams and Natalia Lalic. Lalic will also play D-I at Indiana State, while Williams is transferring to Nova Southeastern.