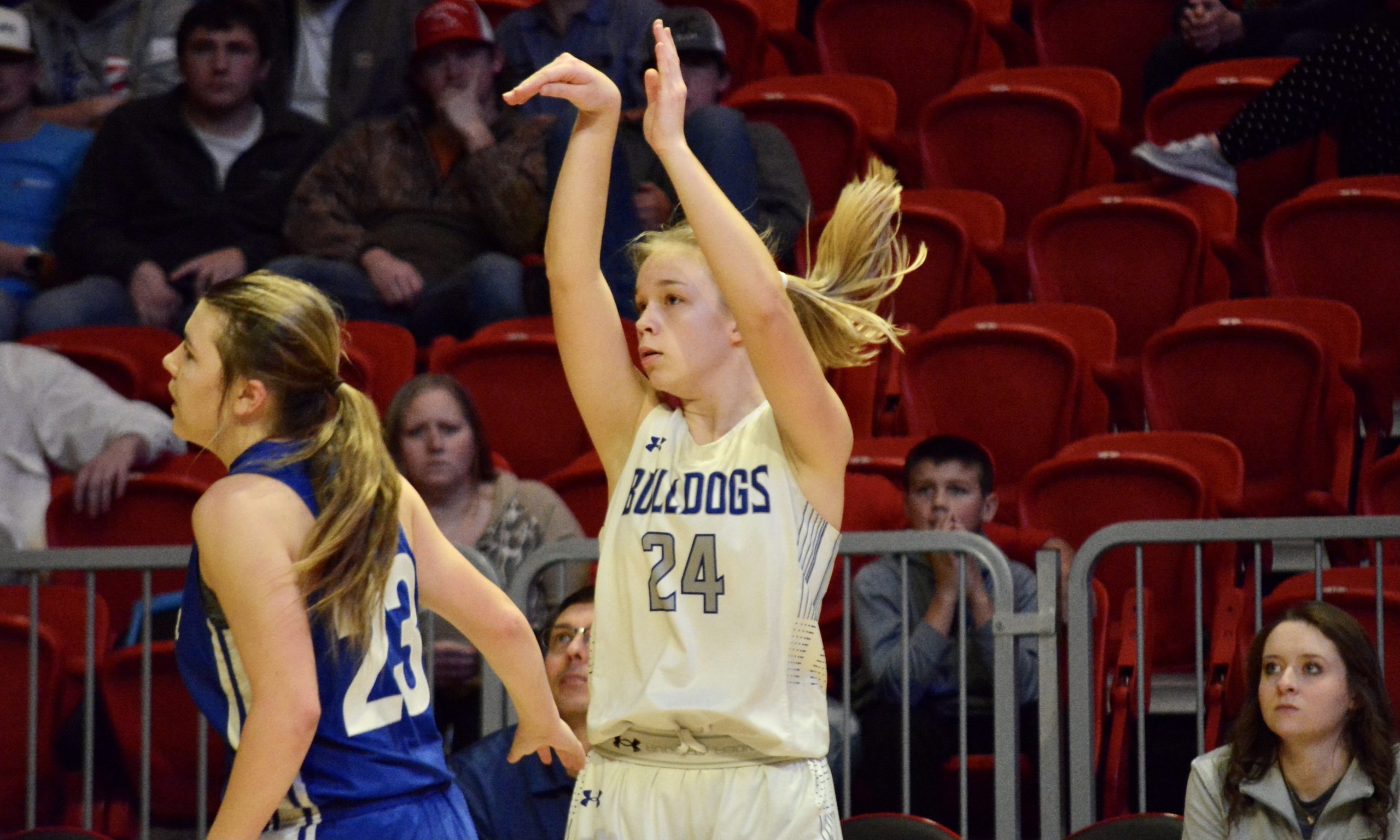 After having one full week off from games, the Notre Dame girls basketball team returned to action last week and hosted its first game at Jerry Grim Court for the 2021-22 season.

The Class 5 No. 2 ranked Bulldogs took on fellow a undefeated Southeast Missouri squad in Oran last Tuesday at home, where Notre Dame won by 11 points despite being down two starters.

Notre Dame entered the contest without three-year starting senior guard Leah Jansen, who suffered an injury during practice. The Bulldogs also had to finish the game without another three-year starter in junior sensation guard Tori Rubel as she suffered an ankle injury early in the first quarter.

Nontheless, Notre Dame proved to be one of the top teams in the state by showing off the strength of its depth. Not only did first-year starting guard junior Jenna Givens score a game-high 17 points, but fellow junior guard Anna Garner also produced double-digit points (10) in her first start replacing Jansen.

Garner scored six of her 10 points from the free-throw line on eight attempts, while she also dished out two assists and collected a steal.

Heading into this game, Garner had scored five-plus points in three other contests including seven in Notre Dame’s 50-49 win over Jackson for this season’s SEMO Conference Tournament Championship.

Givens continued her knack for catching fire from beyond the arc as she made a game-high five 3-pointers for 15 of her points. This was Jenna’s fifth game of the season having knocked down multiple threes. Givens also recorded three rebounds, two steals and two assists.

Leading the Bulldogs in every category other than scoring versus Oran was two-time all-state senior guard and UT Martin signee Lexi Rubel, who finished with five assists, five steals, four rebounds and three blocked shots on top of her 12 points.

If Rubel had recorded one more assist against Oran, she would’ve become Notre Dame’s all-time leader in the category. It’s safe to say Lexi will break the record, though, as she’s also on pace to become the Bulldogs all-time leader for scoring, rebounds and steals.

Both Garner and Seabaugh each had five 3-point attempts, but they failed to make a single one. Rubel was the only other Bulldogs besides Givens to knock down a three in the game.

Oran just had one player reach double digits in the scoring column as it was junior forward Haley Webb with a team-high 12 points. Pacing Webb in scoring for the Eagles was senior forward Hope Woodfin with eight points as the rest of the team combined for 10.

Notre Dame (7-0) was slated to face off against the No. 1 ranked team in Class 5 Whitfield (8-2) on Friday night, but the game was postponed to Feb. 22 and will still be played at Notre Dame.

This past Monday, the Bulldogs took on Class 1 No. 4 Delta (13-1) in a rematch of the First State Community Bank Holiday Classic Championship, which Notre Dame won handedly 55-42.

Notre Dame will now tip-off SEMO Conference regular-season action against the team that took third place in the conference tournament, Sikeston (8-3). The Battle of the Dogs will take place tomorrow night at Jerry Grim Court.

The Bulldogs have one more game as they will end the week against Cor Jesu (3-6) on Friday at home, where the 2001-02 Class 2 State Championship Notre Dame girls basketball team will officially be inducted into the Notre Dame Athletic Hall of Fame at halftime.