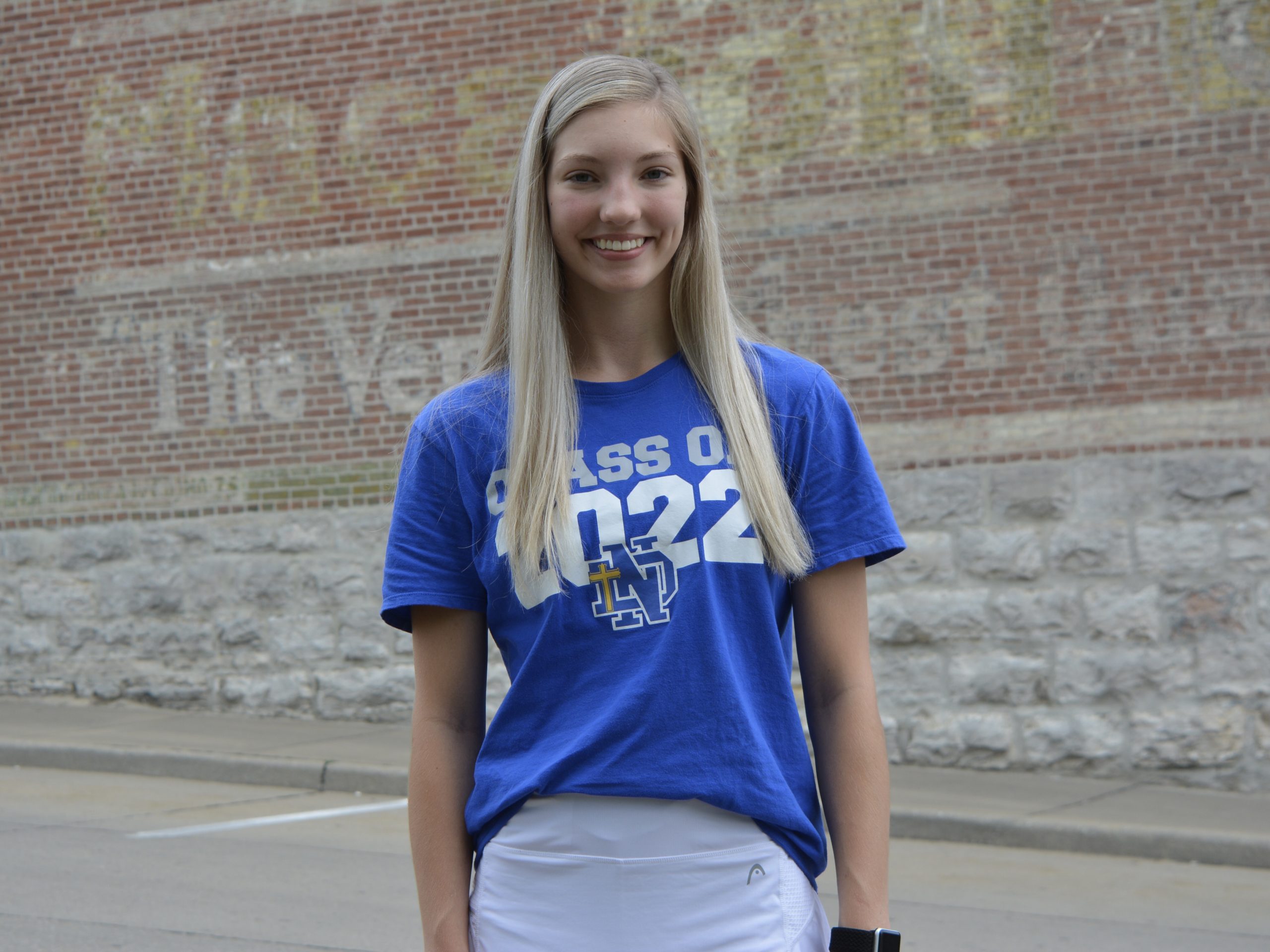 Notre Dame's Lexi Rubel was named The Cash-Book Journal Female Athlete of the Year for the 2020-21 school year. Photo by Jay Forness

After a junior campaign where Lexi Rubel helped the two teams she plays for at Notre Dame finish with a combined 41 wins and four tournament championships, she has been named The Cash-Book Journal’s 2021 Female Athlete of the Year.

After Rubel helped both of her squads reach new heights, she was rightfully honored individually by being named all-conference, all-district and all-state in basketball and all-conference in volleyball.

“[Earning these accolades] means a lot,” Rubel said. “I really like to compete, and I work really hard for everything I’ve gotten. It’s just really nice that other people notice all of the hard work behind it, too.”

This was the second season in a row Lexi has garnered all-state honors for basketball as she was also named district player of the year for the second-straight time. These accolades came after a season where Rubel forever etched her name in the Bulldogs record books as she eclipsed 1,000 career points.

There was no question that Lexi was going to reach 1,000 points during her time at Notre Dame — it was just a matter of when. Rubel had to sit out two games early in the year due to having mono, and the Bulldogs also had to drop a tournament and missed three games in the second half of the season due to inclement weather.

After the snow storm, Rubel sat down with her parents Matt and Michele to calculate how many points she needed to average per game to reach 1,000. They found Lexi had to average exactly 20 points per game if she was going to reach the mark by the end of her junior year.

The Bulldogs were able to play in seven more games following the weather break by reaching the quarterfinals, and Lexi indeed averaged 20 points each game.

“Scoring 1,000 points has always been a big goal for me to reach my junior year,” Rubel said. “After the snow storm for a while I thought maybe I couldn’t get it. … I then made it a personal goal of mine to start getting 20 points every game.”

Even though Rubel is one of the top scorers in Notre Dame girls basketball history, she doesn’t think about the fact that she has to score a lot. Lexi’s main goal each game is to go out, have fun and play hard because the points will come if she does that. “I did have more of a mindset of attack, attack, but overall I still didn’t look until the end, ‘Did I get 20 points?’ I never actually paid attention to that during games.”

For the season, Rubel finished with a team-high average of 16.3 points, 9.3 rebounds, 3.5 assists and 2.4 steals per game. Rubel scored 20 points or more in eight contests while also recording seven double-doubles this past winter. Lexi is on pace to become Notre Dame’s all-time leader in points, rebounds, assists and steals.

“Ever since I was young, I’ve always been a good passer and scorer,” she said. “Especially now in high school I’ve filled into my body, and I’ve really gained so much confidence over the years. [Playing basketball] is just a natural thing now, and I just play off whatever my teammates and the defense gives me. I don’t really think too much about the stats.”

Rubel attributes her success to all of the behind the scenes work she puts in by putting in time every day, whether it’s on the court, in the weight room or both. “Most days both,” Lexi laughed. “It’s a lot of things nobody sees.”

On top of Rubel’s individual success, Notre Dame reached the quarterfinals for the third-consecutive year after winning a third-straight district title with Lexi in the starting five. This was the first time in 17 years that Notre Dame’s girls basketball team had won three district titles in a row.

“Every year for the past three years, each team has been different,” Rubel said. “It’s been really cool that we’ve been able to get a district championship every year with different styles of play.”

For the second-straight season, Rubel was accompanied by her younger sister Tori Rubel, who garnered all-conference and all-district honors as a sophomore this past winter. Lexi and Tori were also selected to the 10-player Holiday Classic All-Tournament Team.

Statistically, The Rubel Duo combined for 30-plus points a total of seven times with their largest output being 37 this season. The only other player on Notre Dame to score 20 or more points in a single game besides Lexi during the 2020-21 campaign was Tori, who produced a career-high 22 points in the Bulldogs 50-38 win over New Madrid County Central in the SEMO Conference Tournament Semifinals.

Last winter, the Rubels helped Notre Dame reach the Class 4 Final Four for the first time in 10 years by combining for 28 points in their 55-35 quarterfinal win over Rockwood Summit. Also on that final-four team was former Bulldog Riley Burger, who graduated in 2020 and is currently a jumper for the University of Louisville’s track and field squad.

“This year we were actually less athletic,” Lexi laughed. “When we implemented full-court pressure, we had to tweak it a little bit and ended up putting in two presses to mix it up. We had to learn how to fit in a new way without Riley Burger on top of the press.”

Notre Dame’s girls basketball team has compiled an overall record of 63-18 over the past three years Rubel has been on the team. Before Lexi’s arrival, Notre Dame hadn’t won a district championship since 2010 and only had 48 victories while losing 56 games the previous four years combined.

“There’s definitely a different type of excitement surrounding the program,” Rubel said. “My freshman year really kind of started the whole wave of girls basketball at Notre Dame getting a lot bigger. I feel like we’ve probably added some more swag and a lot more confidence to our game.”

Rubel doesn’t play a sport in the spring because she’s too busy suiting up for her AAU basketball team SEMO Sizzle, but during the fall, she helped the Bulldogs volleyball team record their most wins since 2016 with 24. Notre Dame also reached the district title game for the first time in two years but ended up falling to Dexter, 3-2.

Even though the Bulldogs didn’t go as far as they wanted to in postseason play, they still won the Dig for Life Challenge tournament earlier in the season. Notre Dame finished 6-0-1 at Dig for Life and only lost one set to Park Hills Central, which they eventually beat 2-0.

“What I love the most about high school sports is that every day is different,” Rubel said. “… You really form a camaraderie with everybody, and it helps you get really close to your classmates you see every day.”