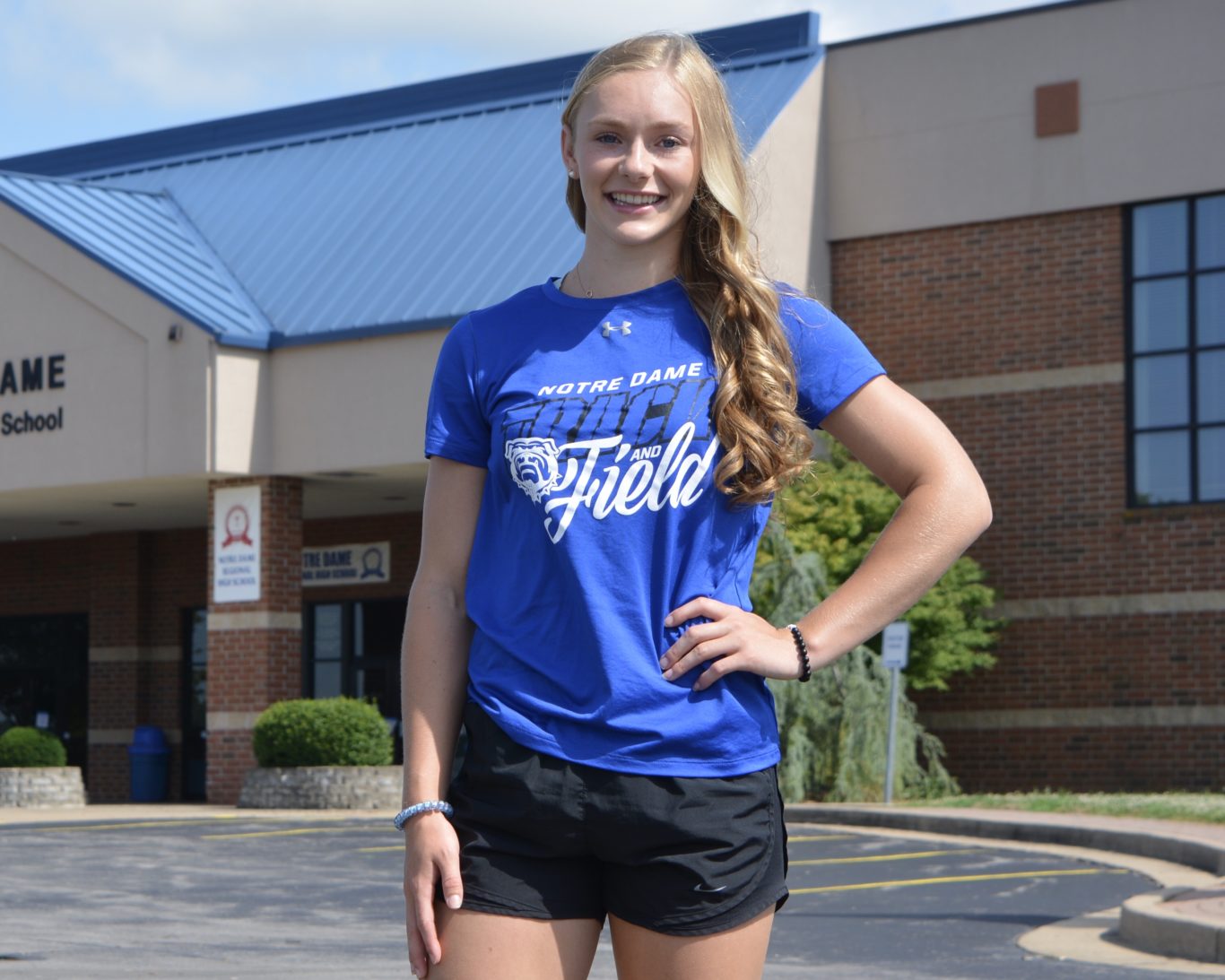 Heading into her freshman year of high school, one of this year’s two CBJ Athletes of the Year and Notre Dame 2020 graduate Riley Burger had many aspirations. However, she never imagined she would’ve become a four-time state champion as a jumper for the track and field team.

This is because Burger pictured herself as a sprinter instead. She discovered her high-flying abilities during an advanced physical education course when she broke the school’s long jump record her first year as a Bulldog.

Burger’s senior year of track was taken away from her due to the coronavirus pandemic canceling all 2020 spring sports, but she was still able to win two Class 4 state titles and set two school records in what was her final full season of track in 2019.

The Louisville signee won a third-straight gold medal in triple jump with a leap of 39 feet, three and a half inches her junior year, and Burger’s school record triple jump is 41-3. This mark ranks second all-time in Missouri history.

Burger won her first and final state championship in long jump with a 19-7.5, which was 6.5 inches ahead of everyone else’s mark in the event. Burger set a new school record with the jump that ranks sixth all-time in state history.

Even though Burger did not have a final full season of track, her and other area seniors were able to compete in the SEMO Conference Senior Only Meet July 8. This is where Burger set her third and final program jumping record, which was in high jump at 5-6.5.

At state last year, Burger was the runner-up in high jump and only finished three inches behind first place at 5-5. One of Burger’s goals this season was to win state titles in all three events for the coveted “Triple Crown.”

Burger also earned all-state honors as a member of the second-place 4×200-meter relay team that only finished 3.89 seconds behind first.

With Burger leading the way, Notre Dame’s girls team took fifth overall in the state meet with 37 points, which is the highest the girls team has ever placed in school history.

“Having that finish is definitely not disappointing to me,” Burger said. “To say that I could finish it like that is a great accomplishment for me because I know if I would’ve gotten beat out at districts or sectionals, or just not won at state, I would’ve been really hard on myself, but at least I would’ve had this year.”

Even though jumping is what Burger will do in college, it was not the only thing this Bulldog succeeded at while at Notre Dame. As a member of the softball team, Burger was a two-time Class 3 All-State outfielder and helped the Bulldogs win three district championships (2016, ‘17, ‘19) and make two Final Four appearances (‘16, ‘17).

“Being named all-state is a great feeling to me just because I don’t like losing — I absolutely hate it,” Burger said. “Knowing that other people see the talent and hard work I’ve put in through all these years is nice to know.”

During Burger’s four years with the program, Notre Dame recorded an overall record of 93-24 including a 27-6 finish this season. Burger set Notre Dame’s all-time, single-season runs scored record with 56 while finishing four stolen bases behind her own school record of 44 (set in 2018) this fall.

Burger was only three hits away from being the team’s all-time, single-season leader with 57 as fellow senior Halle Heuring recorded 59. Burger finished first on Notre Dame in triples (seven), second in home runs (three), third in batting average (.518) and fourth in runs batted in (35).

On top of winning a district title in her final season of softball, Burger helped the Bulldogs win the SEMO Conference regular season title. Notre Dame reached the quarterfinals but fell five runs shy of making it back to the Class 3 Final Four.

“The final season was honestly the best because of the relationships and the team chemistry that we had,” Burger said. “All of the girls got along so well, and I think we really had the best year for that. Then also the talent we had because we even had freshman come in and step up. I’m all about if they’re good enough, let them play.”

“Halle and I being the slap hitters and great people we are tried to do the cool bunt video, where they’re going to slap bunt but then bring it around their back and hit it,” Burger explained. “I wasn’t wearing a helmet, and it hit off the bat and came straight back to my face.”

The last season of high school sports Burger participated in was basketball this winter, but it was even cut short for Notre Dame because of the pandemic. In her second year in the Bulldogs starting five, Burger helped them reach the Class 4 Final Four for the first time in a decade.

Along with placing in the Final Four, the Bulldogs won a second-consecutive Class 4 District 1 Championship and their first-ever SEMO Conference Tournament title. Notre Dame also won the First State Community Bank Holiday Classic for the first time since 2013 with a 57-38 win over Jackson.

The Bulldogs finished 25-4 overall in a season where Burger finished with both all-conference and all-district honors for the first time in her career. Burger averaged 8.4 points, 4.7 rebounds, 2.6 steals and 1.2 blocks per contest in her final season.

Notre Dame won every game in the postseason by at least 11 points, which included a 52-32 win over Ste. Genevieve for the district title and lastly beat Rockwood Summit 55-35 to reach state.

Burger’s favorite memory from this basketball season was during practice when Notre Dame head coach Kirk Boeller was teaching Burger and her teammates how to defend a play. Boeller decided to guard Burger in this drill.

“He was putting his arm against me trying to defend, and we had to move at the same time towards the goal,” Burger recalled. “I felt his arm go down my arm, and there he laid on the ground. He totally belly flopped onto the ground. It was so funny the girls were on the ground laughing, and the J.V. was across the court wondering why the heck we were all laughing.”

Burger’s advice to younger athletes would be, “Definitely keep working hard and even though something isn’t working out now, it definitely could in the future. I was going to be a sprinter, and I wasn’t going to do jumping. I didn’t know jumping was there and then it happened, so not everything is going to be shown to you right away. God is going to make it be shown when he wants it.”