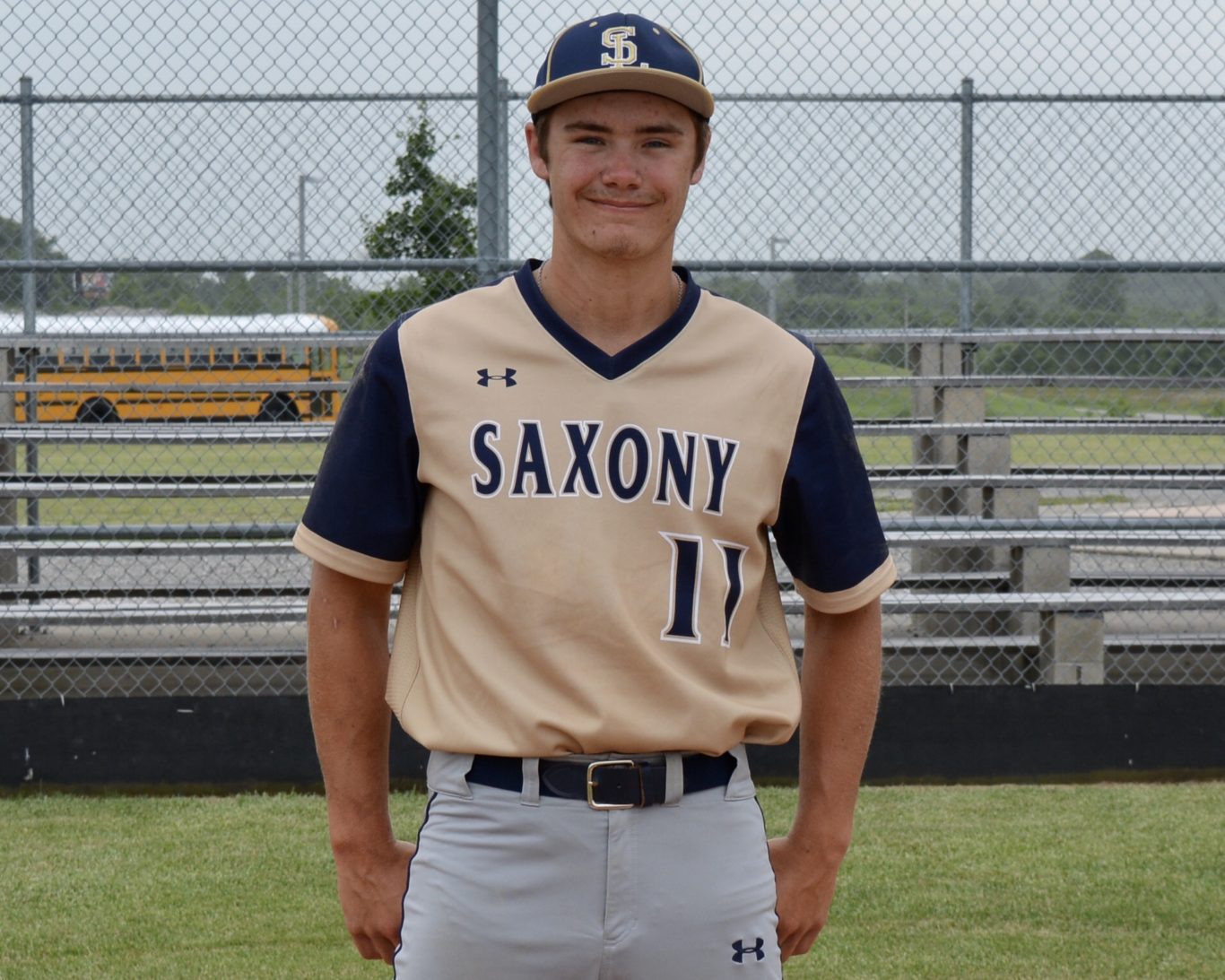 Saxony Lutheran 2020 graduate Ethan Koenig did not only letter in his final three varsity sports seasons as a Crusader, but he helped two programs win a district championship with one even placing in the final four for the first time in school history.

These accomplishments led to Koenig being selected to this year’s All-CBJ Team, and he also had success in the classroom by being named Academic All-State in baseball and basketball.

Baseball is Koenig’s most favorite sport, and it’s the one he became the most known for in his time at Saxony, especially during the team’s historic 2019 campaign when the Crusaders reached the Class 3 Final Four.

Saxony had only ever reached the quarterfinals in the team’s 14-year history, and that was back when the program played Class 1 baseball in 2006.

With Koenig as the starting catcher, the Crusaders won their first district championship in a decade by taking home the Class 3 District 2 title along with winning sectionals, quarterfinals and taking third in the final four.

Koenig was one of the seven players who earned all-district honors for Saxony following the season, which ended up being his final year of high school baseball due to the coronavirus pandemic canceling spring sports this school year.

“It stinks because we had a lot of potential this year,” Koenig said. “This season being cut out from under us like that really stinks, but then Coach [Paul] Sander started putting together these little games for us.”

The games Koenig is referring to was the intrasquad doubleheader and alumni game Saxony hosted on June 11 and 27, respectively. The Crusaders varsity team won all three contests by beating the junior varsity 14-4 and 15-2 in the doubleheader, while handing the alumni team a 9-5 defeat through nine innings.

“Baseball is one of those sports where you’re together all the time laughing and joking,” Koenig said. “It’s not like basketball where you’re running and learning plays and stuff. Baseball practice is not more laid back, but it gives you the opportunity to gel more. You’re taking ground balls, talking and there are dugout shenanigans — stuff like that makes it really fun and really cool just to be around these guys a couple more times.”

Along with it being a season Koenig, his teammates and coaches will remember and cherish for the rest of their lives, he also had much success individually at and behind the plate in 2019.

Koenig earned the nickname “The Wall” by the team’s radio broadcaster Matt Brucker of Pure Country C106.1 and rightfully so. Defensively, Koenig finished with a 99.5% fielding percentage with only one error while getting out a team-high 168 base runners.

Koenig also caught for a pitching staff that finished with a combined record of 22-4 with starting pitchers like Eli Brown (7-2), Tanner King (5-0), Mason Lewis (5-1) and Austin Fritsche (5-1) on the mound. The staff also combined for 225 strikeouts while only allowing 127 hits and 61 earned runs through 27 games.

At the plate, Koenig was one of Saxony’s five players who competed in every game to finish with a batting average above .300 by coming up with a .324 BA. Koenig recorded 24 hits (sixth on team), 16 runs batted in (fourth), 12 runs (tied seventh) and six stolen bases (sixth).

The road to the state final four was certainly not an easy one for Koenig and the Crusaders as they won the district championship by two runs and sectional and quarterfinal games by only one.

“Scott City was a game and a half,” Koenig recalled. “I think we had four or five lead changes that game, and that was really fun to play in. It was really fun to win a district championship — that’s when we kind of knew we had a little something.”

The district tournament was hosted at Clearwater, where Koenig noticed a small spring running by the field. Before the first game, Koenig told Coach Sander he would jump in the spring and swim in it if Saxony won districts.

“Right before we got on the bus, I said, “Coach, watch this,’” Koenig said. “I ran in there and started swimming in the stream. When I got out, Coach Sander just laughed and laughed. I was riding back home in my sliding shorts with a bunch of guys. We had the speaker cranked so loud on the bus coming home from Clearwater.”

Saxony ended up facing Malden in the sectional round, which is a team the Crusaders defeated 11-0 in their regular-season finale. However, Coach Sander told the team before the game, “Malden will beat you by one run every day.”

Koenig admitted that he and the boys were “a little cocky” heading into the game even despite Sander’s message. They found out quickly that Sander was indeed right.

The game came right down to the wire and went extra innings as Saxony won 9-8 with a walk-off single by Austin Fritsche in the bottom of the 11th inning. Koenig finished second in the game with hits at three while also scoring two runs.

Koenig said he thought he almost cost the Crusaders the game in the seventh inning when he decided to go for home plate on an error at first base, but he ended up tying the game at 8-8.

“The ball only went 4-feet passed [first base], and Coach Sander was just staring at me, so I took off for home,” Koenig laughed. “I figured, ‘Why not go for it?’ Catcher caught it down here, and I stepped on the plate. Phew! I should’ve been out by like three steps but that catcher didn’t react quick enough.”

Koenig said his heart was pounding during the play, and he talked with Coach Sander afterwards. Sander told him, “I left that up to you. I relied on your gut instinct,” to which Koenig replied, “Well, I’m glad my gut didn’t end our playoff run.”

In the quarterfinals, the Crusaders were supposed to host West County but a severe storm forced the game to be played at a turf field in Ste. Genevieve. Saxony ended up winning 7-6 to reach state.

In the semifinals, the Crusaders faced off against eventual runner-ups Fatima and fell by a score of 14-2, but they took third place by defeating Montgomery County 9-1 to close the season.

As a member of Saxony’s soccer team, Koenig helped the Crusaders, who finished 10-10 overall, win the Class 1 District 1 Championship for the sixth-season in a row. Saxony’s boys basketball team went 10-17 overall after only winning two games Koenig’s junior year.

On the court, Koenig averaged 8.7 points and 4.4 rebounds per game along with a 2-point shooting percentage of 50.7%. He also shot 63.6% from the free-throw line while leading the team in drawn charges with nine.

For the young up and coming athletes who have seen Koenig play, he had this advice for them, “Love the game if you’re going to play it. If you catch without loving baseball, it’s going to be the worst experience of your life. If you’re going to do something, really put your heart into it.”