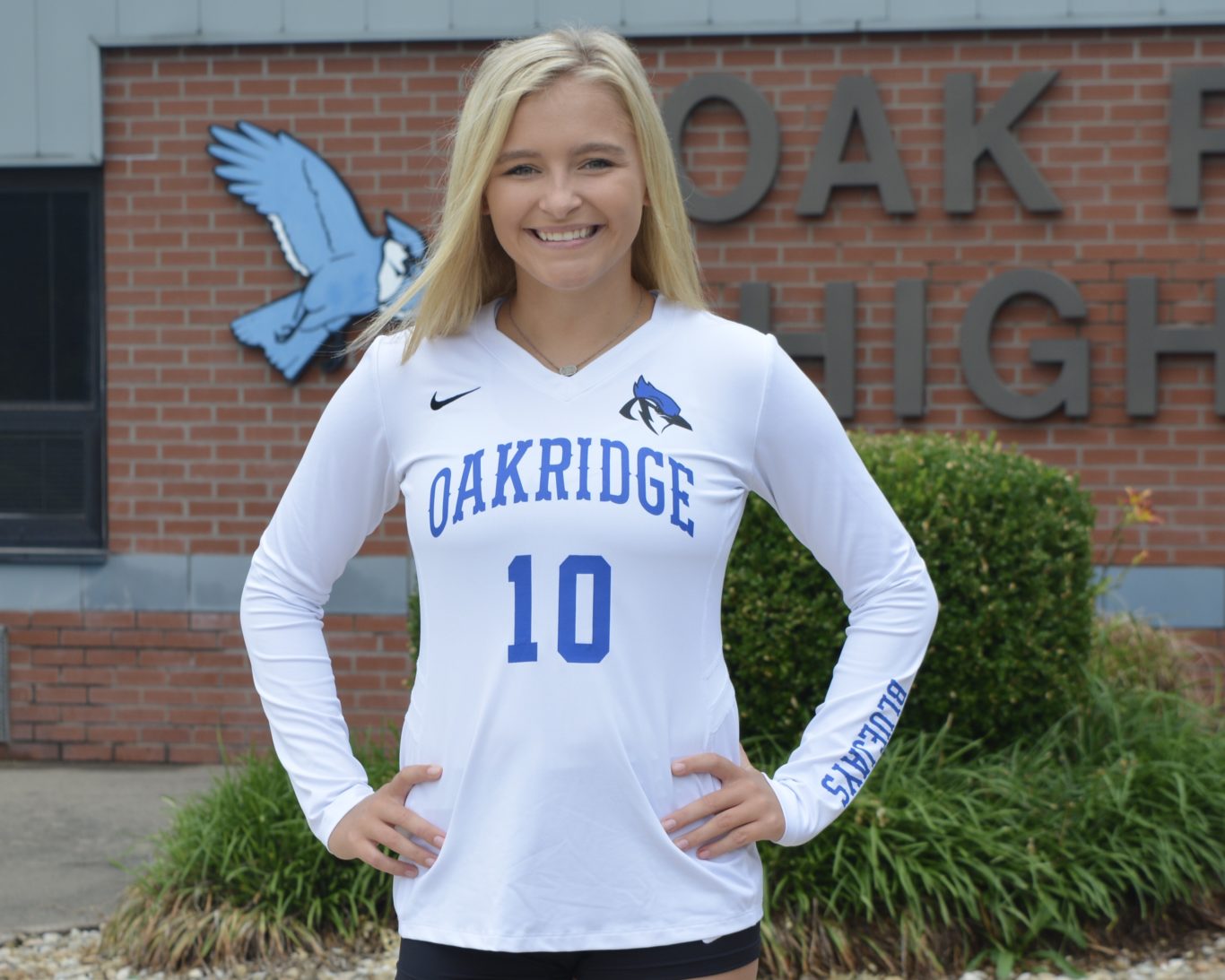 As the youngest All-CBJ Team selection in history, Paige Glueck has already left her mark at Oak Ridge during her first two years as a Blue Jay.

She has done so all on the court as not only a member of Oak Ridge’s volleyball team but also the school’s girls basketball team, which had its first official varsity season this past winter.

“[This year] was pretty good,” Glueck said. “We’re a young team on both sides in basketball and volleyball, so we learned a lot throughout the year playing against seniors and juniors. We had a lot of team time because we lost together, so it built up the team bond.”

“My family has not gotten a lot of [athletic honors], so it kind of hit me different. ‘Oh, I’m one of the first ones in my family — Yes! I’m better than my brother,’” Glueck laughed. “It was a special feeling to me, and it felt like I was the leader of my team.”

As a member of the volleyball team, Glueck helped Oak Ridge finish with a record above .500 for the third-straight season at 16-12-2 overall. The Blue Jays earned the No. 2 seed and a first-round bye in the Class 1 District 4 Tournament, but they fell to No. 3 seed and eventual district champions Crystal City 2-1 in the semifinals.

Glueck was the lone returning starter on Oak Ridge’s volleyball team from the 2018 season, which went 23-9-1 overall and featured four players that are now competing at the college level. Those former Blue Jays are Brittany Showmaker (Frontier CC), Mollie and Sophie Thompson, and Maggie Howe, who are all at Stephens College.

“There was a little bit of pressure because everybody felt like I had to be the star on the team,” Glueck said. “I do miss my senior team because they knew the game and everything, and we’re still learning that.”

On top of no longer being able to play with that senior class, Glueck also had to do without former Oak Ridge head coach Whitney McFall, who stepped down following last season. McFall had coached Glueck since she was in elementary school.

Taking over as the Blue Jays head coach was Julie Ward, and Glueck said she had a lot of fun playing under Ward this season.

“It’s a new person to see me and give me new advice on what I need to work on,” Glueck said. “[Ward] was different than Whitney — it’s fun to see different types of coaches.”

Another way Glueck led the Blue Jays was by channeling the negative energy whenever Oak Ridge was down into excitement and positivity whenever her or another teammate would record a kill.

“[What I enjoy the most about volleyball] is the excitement — you don’t know what’s going to happen next,” Glueck said. “There’s no physical contact, so it’s a mental game. Just seeing how hard people hit and getting that up brings so much excitement, like, ‘Yes, I got it!’ Then seeing your team hit the ball — I don’t know — just blows my mind.”

Off the court, Glueck’s most favorite aspect of high school sports are the bus rides to and from away games as she would describe herself as a unique presence because she “brings the craziness.”

“Some people were like, ‘Oh my gosh, Paige,’ and I was just like, ‘Sorry,’” Glueck laughed. “The bus ride to districts was interesting. We had all the windows down and there was this football team, and we were singing ‘Get Low’ out the window to them. We were like, ‘What are we doing?’”

There was no question as to why Glueck became the first Blue Jays girls basketball player to earn all-conference as she averaged a double double by recording 12 points and 10 rebounds per game. Glueck also averaged five steals and three assists through 20 contests.

“It means a lot to be the first for Oak Ride because Oak Ridge has been around for a while, and I won’t be able to be the first for anything else,” Glueck said. “Being the first player from Oak Ridge to earn all-conference shows girls in elementary that they can do whatever they want. Whatever you want to be, you can do.”

Along with none of the players on Oak Ridge having no varsity basketball experience, the team also suffered from injuries throughout the season as well as being oversized against teams like Class 2 Final Four finishers Oran.

Oran defeated the Blue Jays 76-21 in the regular season and finished 2019-20 25-6 overall and fell to the Class 2 State Champions East Buchanon 66-37 in the state semifinals. The Eagles had two players named all-state in 2020 graduate Kaylee Payne, who will play softball at Southeast Missouri State, and to be senior Katie Webb.

“We walked in [Oran’s gym] pretty scared, and we were like, ‘Oh my gosh — we’re going to be terrible,’” Glueck laughed. “If you look at the score it was bad, but if you were there it wasn’t that bad. It challenged us to get better and push ourselves.

“We had fun during this season but most of the time we lost, and we’d just be bummed out after the game. Once coach stopped yelling at us, we got pretty back to normal.”

What Glueck enjoys the most about playing basketball is that it helps her stay fit, but she is also able to take out her anger while playing. Glueck realizes there are sadly some people who “bash” girls basketball and discredit it, but she’s ready to prove those people wrong now that Oak Ridge finally has a girls team.

“Basketball is a good sport to have, and boys get to do it,” Glueck said. “Sometimes people say, ‘Boys are better — they understand it more.’ Well you never gave girls a shot, so now girls have a shot to prove their point.”

Oak Ridge’s head coach this past season was Matthew Schonhoff, who also served as the school’s athletic director. Schonhoff moved to a different school district this summer and Adam Winkler will be the team’s new head coach this winter.

What Glueck has been working on this offseason is becoming more vocal. She is also focusing on her strength to improve her rebounding as well as hitting ability.

The advice Glueck would give to younger athletes would be, “Do what you want to do and don’t let anybody tear you down. People will try and tell me girls basketball isn’t a sport or that they don’t support it. I still do it, and I still love it, so I think you shoot for the stars and go for it.”