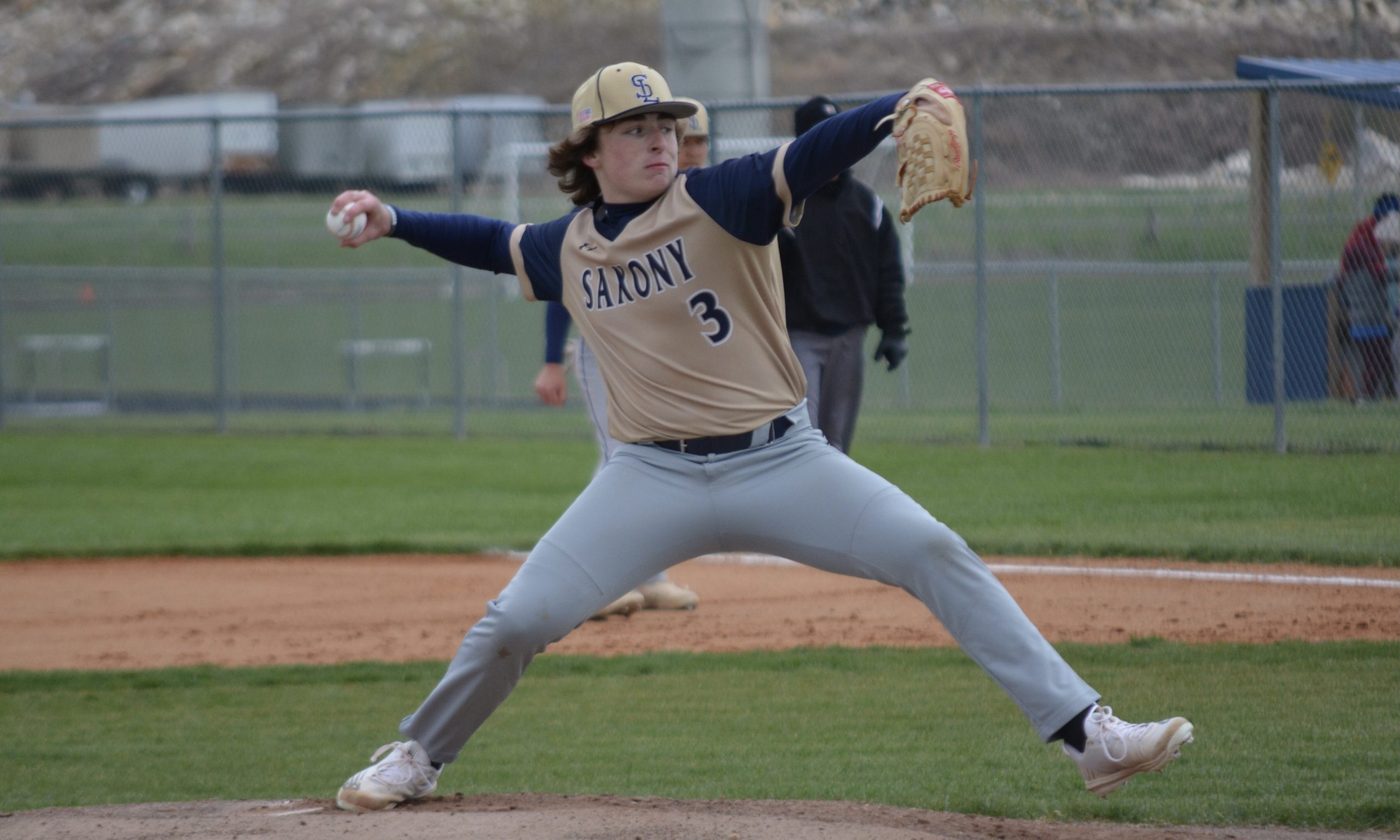 Junior Drew Hahs has become one of Saxony Lutheran baseball’s top pitchers by recording a team-high 19 strikeouts through 13.1 innings this season. Photo by Jay Forness

The Saxony Lutheran baseball team is coming off a 2021 campaign where the Crusaders only lost three games and reached the district championship game for the fourth-straight season.

Saxony had been playing in Class 3 during each of those years, but the Crusaders were moved down to Class 2 and are currently 6-2 overall this spring.

“If somebody would’ve said early on that we’d be 6-2, I would’ve said, ‘I’ll take it,’” Saxony head coach Paul Sander said. “With unknown pitching and new guys in the lineup, I think it’s a great start. One thing about this year’s schedule is it’s the toughest one we’ve ever had.

“We have a lot of teams on the schedule that we didn’t have before, and all of them are quality opponents. There aren’t many cupcakes on our schedule, so hopefully that’ll make us better as the year goes on playing good teams time after time.”

Saxony’s only two losses are to Fredericktown by one run at 2-1 and lastly Kelly (8-3) by two runs, 6-4. Kelly ended the Crusaders season last spring in the Class 3 District 2 Championship game.

In 31 at bats, Tarry leads Saxony with 10 hits and 10 runs scored while also having recorded four stolen bases and three runs batted in. Lewis paces Tarry with nine hits of his own as four of them have been doubles, and he’s also scored nine runs, stolen four bases and driven in four runs.

“Lewis is our three-hole hitter — he’s who you count on,” Coach Sander said. “He’s a great kid, good competitor and just a good player. All of these kids are quality kids, and they take a lot of pride in what they do and in their school. I’m proud of all of them, and Lewis is one of those kids that’s just a quality kid.”

Scoring the most runs for the Crusaders has been Johnson with 12 as he’s also Saxony’s leader in home runs (one), stolen bases (eight) and is second in RBIs (eight). Sophomore Blake Gaebler is the team’s leader in RBIs with nine, and he’s also hit one of Saxony’s two triples while scoring four runs.

“So far we’ve had various guys hitting in various games — we haven’t hit on all cylinders yet when they’re all hitting at the same time,” Coach Sander said. “That’s hard for any team to do — teams on TV don’t do that very often.

“Now we’ve got a couple guys, who didn’t hit early, hitting better. Overall, the hitting has been fine, so I feel good about it.”

Hahs, Lodge and Tarry have also been standouts on the mound for Saxony as Colin has a record of 2-1 overall, while Drew and Wilson are each 1-0. Hahs leads the Crusaders in strikeouts at 19 Ks, while Tarry and Lodge pace him with 16 and 11, respectively.

“Hahs has been pretty dominant early in games, and he continues to throw the ball really well,” Coach Sander said of his first-year starting pitcher.

Lodge has the best earned run average out of the three at .80 as Hahs paces him with a 2.62 and Tarry is currently recording an ERA of 3.50. Another key arm for Saxony has been Johnson, who is 1-1 by picking up a save with 10 strikeouts and a 3.00 ERA through seven innings.

“Our pitching is still a question mark because maybe not all of them are young in stature as far as what grade they’re in, but they’re all young as far as pitchers are concerned,” Coach Sander said. “Other than Wilson Lodge, none of them pitched more than 10 innings of high school baseball. We’re getting really good starts out of Drew Hahs, who’s going to get better.

“Jacob Johnson shows calmness on the mound when he comes in relief, so I think he’s fine. We expected our pitching staff to be good, but they’ve been better than we expected.”