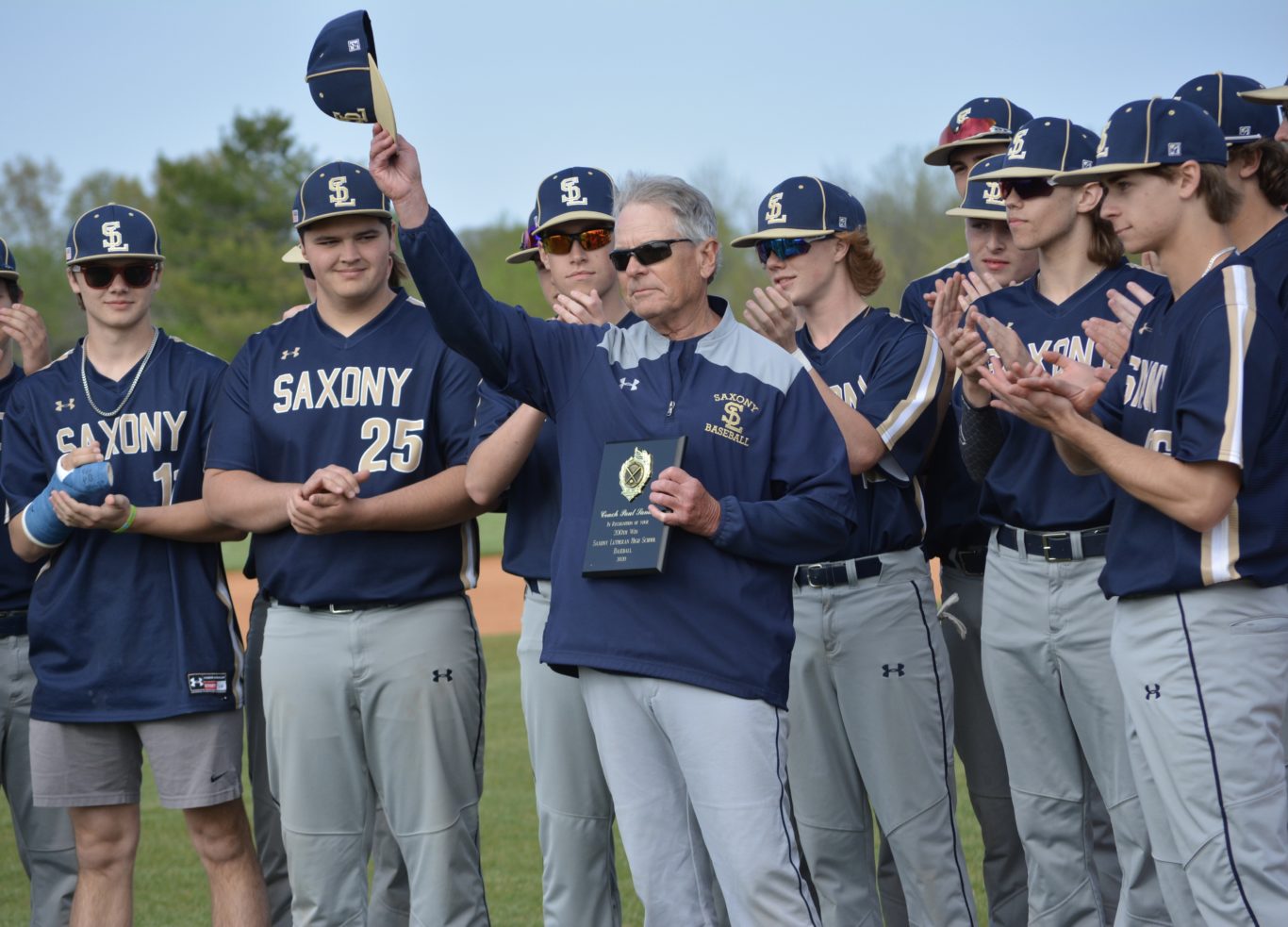 When Paul Sander was first approached to become the head coach of Saxony Lutheran’s baseball team for the 2007 season, he was hesitant at first after spending the previous 14 years as Jackson’s mayor.

Sander’s initial reaction was that he didn’t really want to be around “what goes on at a lot of schools today.” However, Paul’s wife Pamela encouraged him to consider taking the job, so he ended up deciding that he would try it out for one year.

“[I now realize] I wouldn’t have ever wanted to be anywhere else,” Coach Sander said. “I’ve been blessed with 99.5% of kids who are polite and courteous, and parents who are supportive. It’s just been such a pleasant situation for me and better than anything I ever expected.”

Sander is currently in his 15th season as the Crusaders head coach and was honored before last Tuesday’s home game for reaching 200 career wins at Saxony (213-99-1 overall coaching record). Before Sander was honored, he said he knew “something was up” when all of his sons along with their families and his in-laws were at the game.

“I teared up a little bit,” Sander admitted. “I didn’t expect it. I knew my oldest son was coming with his wife and my two young grandsons from Nashville to visit but not come to this. Then my mother and father-in law come to a game every once and a while, so that didn’t surprise me.

“When my youngest son from St. Louis came, I knew he wasn’t supposed to be here and thought, ‘I’m not sure what’s going on.’ I knew when Spencer showed that something was up. To have a big crowd and Amy Birk announce with very kind words what I’ve done here meant a lot to me.” 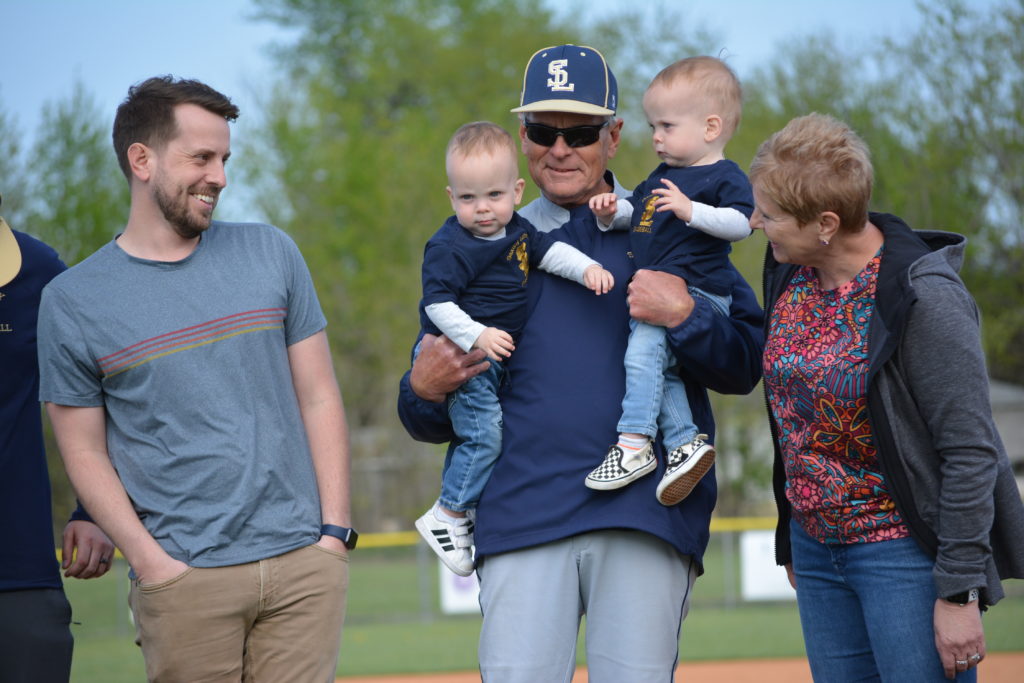 Paul Sander with family members during the ceremony celebrating his 200 career wins on April 13.

With Sander at the helm, Saxony has won three district championships, two sectional titles and made the final four for the first time in school history two seasons ago.

“[Reaching 200 wins at one school] means that No. 1 you’ve probably been some place a long time,” Coach Sander joked. “It also means that you’ve been blessed to have a tremendous amount of good baseball players over a period of time. Also good support from the administration and parents.”

Over the course of Coach Sander’s career with the Crusaders, he’s had 66 all-district and 14 all-state selections. Numerous of those players have went on to be college baseball players as three on this year’s team will sign national letters of intent to do so tomorrow (Eli Brown and Tanner King: Lindenwood; Will LeDure: Fontbonne).

“We’ve only had one season where we didn’t have an above .500 record,” Sander said. “I think that’s helped build the program when you have some success. When I started here, we had 13 players and luckily most of them were pretty good players.

“Now we have 30 to 40 tryout every year, so we’ve been able to build a program to where kids maybe even think about when they’re in eighth grade of coming here to get the education and also because they want to play baseball here.”

Along with striving to bring out the best in his players on the field, Coach Sander is just as much if not more concerned with making sure they all learn about respect and responsibility. For example, when Saxony plays a team that doesn’t act in a proper manner, Sander’s players never reciprocate.

As far as responsibility goes, Coach Sander expects for each of his players to be accountable for themselves such as being on time for practice and knowing when changes have been made to the team’s schedule.

“It’s their responsibility, and they’ll learn that real quick if they miss one,” Sander said. “They have to take care of themselves — their mom doesn’t live here. I think that helps them later in life and it’s rewarding to me. I tell every team at the end of the year, ‘You’re always welcome to come back here as an alumni. Visit practice and sit in the dugout if we have a game.

“I’ll turn around and here’s a guy that was here five years ago, ‘Hey, Coach! Thought I’d come by and see you today.’ That’s rewarding to know that they still think enough of the school and the program to stop by and fill me in on how they’re doing.”

On top of helping his players become better people, Coach Sander also thoroughly enjoys helping the ones who have a shot of playing in college be recruited. Sander helps players in the recruiting process by making calls to college coaches for them to “get their foot in the door.” After Sander is able to get a college coach interested in one of his players, he said it’s then the player’s responsibility to take the recruiting process from there.

Besides 200-plus victories and winning numerous championships, Coach Sander has also made Saxony’s baseball field, which has been dubbed “Cadillac Field,” one of the top in all of Southeast Missouri and Class 3.

Once Saxony informed Sander that any money he raised would 100% go towards his program alone, he came up with multiple projects that he wanted to complete over the course of his career. Paul has now nearly raised $200,000.

“I have projects every year that I do that people can actually see where the money has been spent,” Sander said. “They don’t have to wonder, ‘Well, I donated. Where did that go?’ I’ll be able to take a picture of what I did, send it to them and say, ‘Here’s how your money was spent last year. Here’s what we would like to do this year. If you can help us, we’d appreciate it.”

When Coach Sander first started at Saxony, there was only a backstop and an outfield fence. Everything except for the clubhouse one can see if they visit Saxony’s ballpark has been possible because of the money Sander was able to have donated.

Sander said what made the field next level is when the grass infield was put in by getting rid of the dirt and moving onto a first-class grass infield. Some other things made by possible by donations for the program include two batting cages, bleachers, dugout roofs, dugout benches, bullpen mounds and windscreens.

“If somebody is going to do something like that No. 1 you have to stay a while unless you have unlimited funds,” Sander explained. “No. 2 you have to have a plan. My plan was to sit down and write what I call, ‘yearly major projects,’ that you can do over a period of time.”