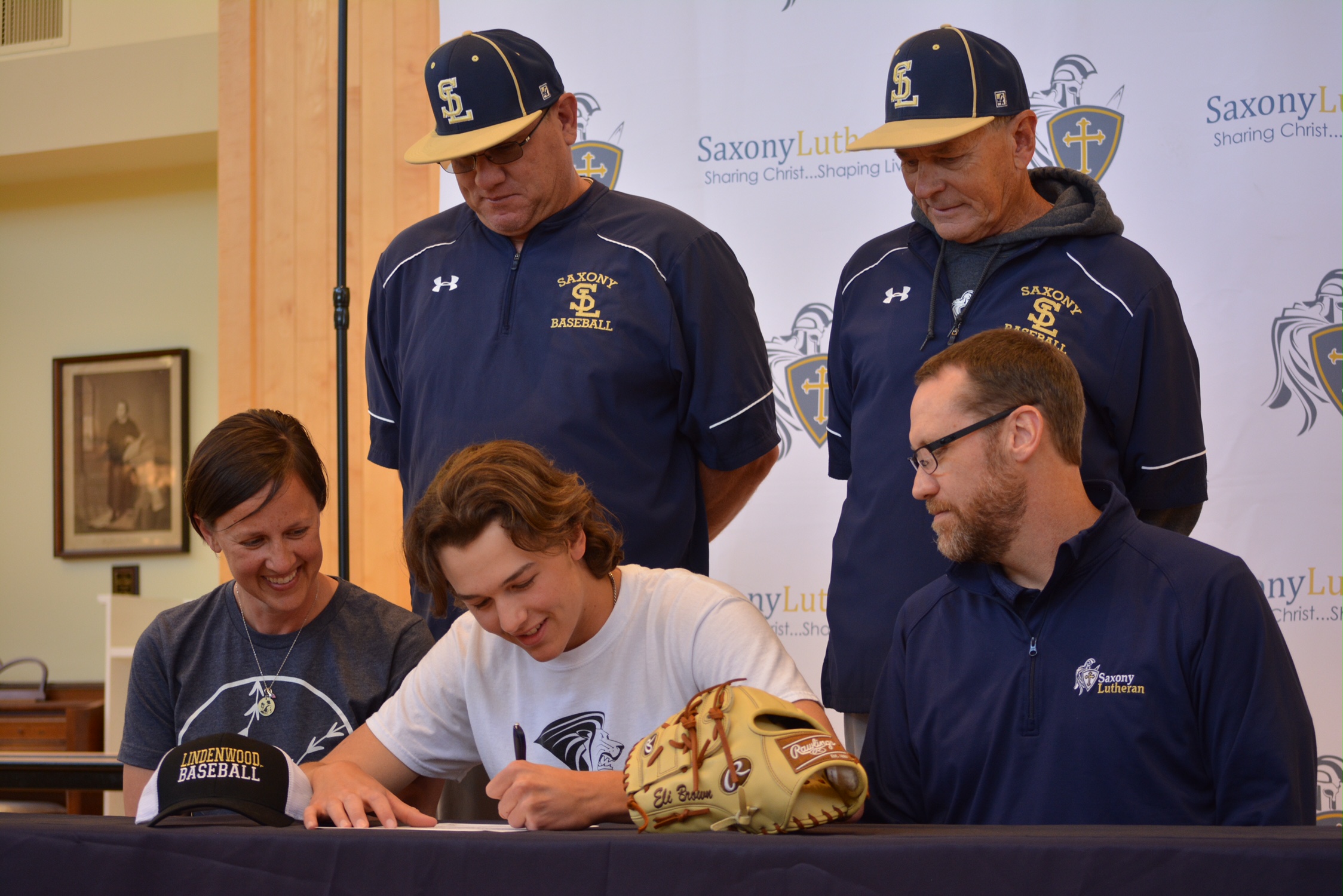 One of the keys to happiness in life is for people to do what they love, and at a young age, Saxony Lutheran senior Eli Brown discovered that his love was baseball.

This realization didn’t even come during a game for Brown, but rather at his first-ever tee-ball practice, where he walked out onto the field and announced, “This is the best day of my life.”

Brown’s love for the game has pushed him to become one of the best high school pitchers in the state of Missouri, and he will continue to have the best days of his life on the mound at Lindenwood since he signed with the university last month.

“To finally make it official, I mean, that means the world to me,” Brown said. “I’ve been chasing this dream since I was a young boy, and that’s all I’ve ever wanted to do. Have the opportunity to play in college. To get it official is kind of surreal.”

It was last year when Brown verbally committed to Lindenwood after not being able to have a junior campaign in 2020. This was due to MSHSAA cancelling that spring season because of the coronavirus pandemic, but luckily for Brown he had already proven himself as an arm to be reckoned with his sophomore year.

In 2019, not only did Brown become Saxony’s ace pitcher by finishing with an overall record of 7-2 and recording 63 strikeouts and an earned run average of 1.64, but he also helped the Crusaders reach their first-ever Class 3 Final Four. Eli was also tabbed to the Class 3 All-State team.

“The mound is one place where I can always walk out to and just feel comfortable there,” Brown said. “I don’t know why there, over any other place, but I feel like I’m in command of the game. Even when things aren’t going our way, it’s the pitcher’s fault. I just like being in charge and being able to dictate where the game is headed.”

Brown said he entered 2019 with not having the mindset of becoming his team’s top pitcher, but he said things fell in place and attributed a “great defense” for his success. Brown also said the relationship he formed with then-catcher and Saxony 2020 graduate Ethan Koenig played a major role for him to have an all-state campaign.

Following his sophomore year and while having to sit out the 2020 season due to the pandemic, Brown said he knew he had problems with his mechanics that he needed to address during his time off. Brown said the main issue was that he was only throwing with his arm.

“I was able to go in and work with Todd Pennington at Balls-n-Strikes, and the first thing we started doing was working on legs, legs, legs,” Brown said. “Being able to drive off the back leg and getting a stiff plant foot has increased my velocity and helped me stay on line better. I don’t lose control very often, and if I do it’s more up and down instead of in and out.

“I also developed a new pitch since two years ago. I was only a fastball, curveball and changeup guy, but now I’ve developed a slider. I would’ve had that last year if we would’ve gotten to play, so this year has been the first time it’s been in action with me in a Saxony uniform.”

At the beginning of this season, Brown showed the Show Me State that he is one of its best pitchers by becoming the 11th player in state history to record 20 or more strikeouts through seven innings. Brown etched his name in MSHSAA’s record book with 20 Ks in a 9-0 win over Bloomfield March 20 at home, where he only allowed one hit on 100 pitches with 73 of them being strikes.

To no surprise, Brown is Saxony’s leader in strikeouts with 68 Ks along with only allowing 13 hits. Behind Brown in strikeouts is fellow Lindenwood signee senior Tanner King, who currently has 46 while posting a record of 4-1 and a 1.00 ERA.

On top of Brown’s record remaining unblemished this spring (6-0), he has yet to allow an earned run for a perfect ERA of 0.0. Opposing teams have scored three runs while Brown has pitched this spring, but each of those came off defensive errors.

One of the reasons why Brown decided to sign with Lindenwood is because he had an opportunity to actually work with the program’s pitching coach, Zac Pearman, during one of his travel seasons. Brown attended a camp at Lindenwood, where Coach Pearman liked what he saw from Eli and invited him to visit the campus.

“As soon as I went up there for the visit, you could just tell they had a winning atmosphere,” Brown said. “The campus is beautiful and the field is beautiful. It seemed like a great school to be at, and it just felt like home.”

Along with pitching for one of the top Division-II programs in the nation, Brown is excited to continue playing with one of his close friends in King, who didn’t commit to Lindenwood until the beginning of last month.

Brown knew King had several colleges to choose from, but their now future head coach Doug Bletcher called Eli one day and asked him about a kid named “Tanner.”

“[Coach Bletcher] was like, ‘Hey, tell me what you know about this Tanner kid,’” Brown recalled. “I went like, ‘Wait, the Tanner King that plays with me?’ I love playing with him, and I’ve played with him all these years and been friends with him a little beforehand. We’ve always been real close, and he’s just a beast on the field.”

Saxony is ranked No. 2 in Class 3 with a record of 17-1 and has earned the No. 1 seed in the Class 3 District 2 Tournament, which starts Saturday.