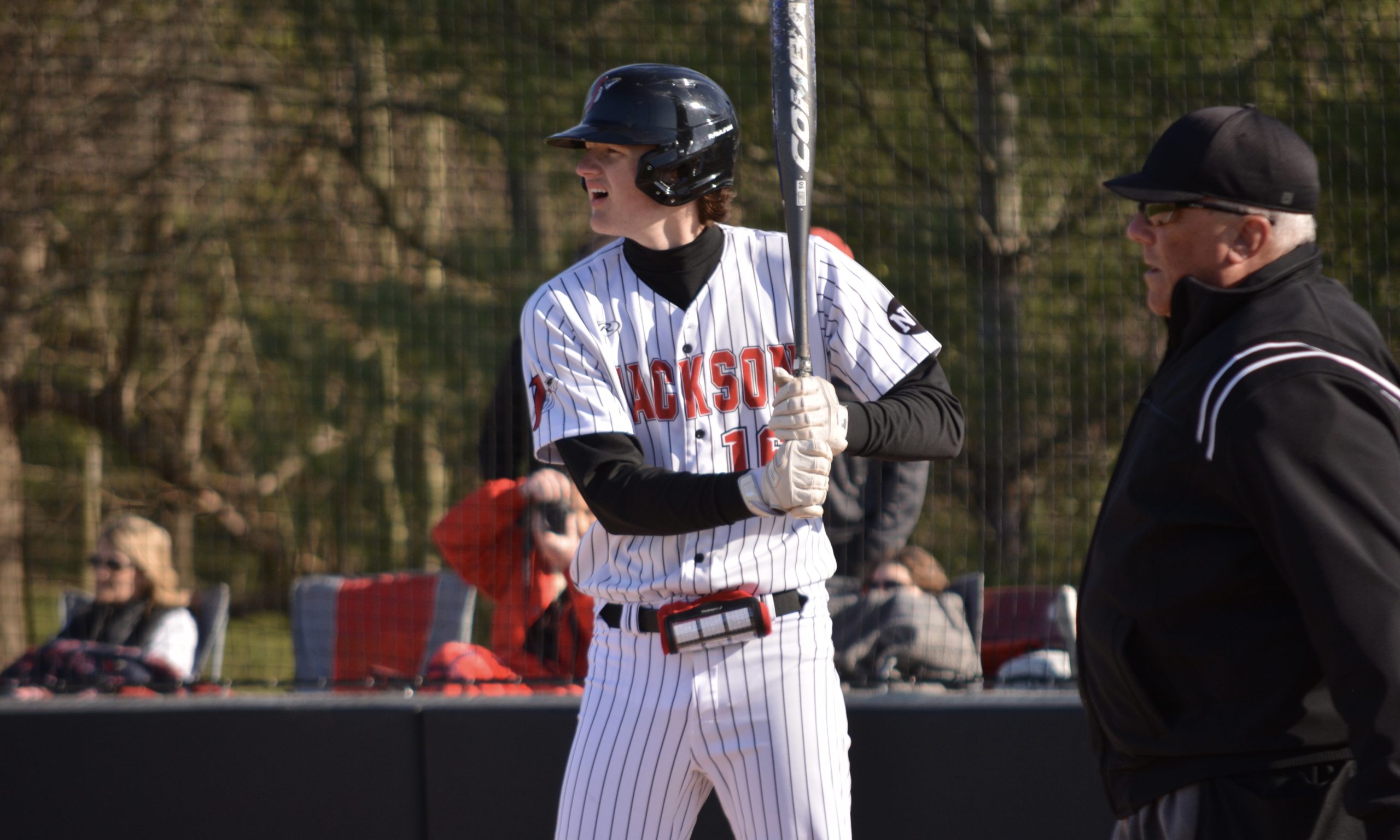 Despite the Jackson baseball team being unable to bring home a Class 6 District 1 Championship last spring, the Indians bring plenty of optimism heading into this season.

The main reason why is because they bring back an array of starters from last year, like Missouri State commit junior outfielder Caden Bogenpohl, senior pitcher Cayden Drum and junior third baseman Quinton Borders just to name a few.

This will be head coach Tatum Kitchen’s second official season at the helm. The Indians finished 22-9 under Coach Kitchen and were Class 6 District 1 runner-ups as they fell to Lindbergh 8-2 in the district title game.

“Even though we do have several returners, we just need to sort out who we are and what we can do — just play,” Coach Kitchen said. “It’s unbelievable to think, ‘Our goal is to go undefeated.’ Baseball is too hard to do that, but we just want to compete, play well and get better. We have a hard schedule, so there could be some games where we run into some buzzsaws.

“We just want to be mentally tough and ready to go when we get to May. Looking at Class 6, everybody is good. I also feel like our conference is good — everybody can beat you if you’re not ready to go.

“Even though we’re really talented, we didn’t win the conference and we didn’t win districts. It’s not like we should be lacking motivation — we just need to always get better and be physically good.”

On top of returners like these for the Indians, Jackson will also have a new player in Sikeston transfer junior outfielder Baden Hackworth, who — like Bogenpohl — is committed to play Division-I baseball. Hackworth, who started plenty of games for the Bulldogs as a sophomore, will play college baseball at Saint Louis.

“Having two Division-I commits is a cool thing for our program because it gets your name out there,” Coach Kitchen said. “We have other guys that I think will be D-I signees at some point, but that gives us zero wins and you kind of have a target on your back. It does give us notoriety.”

Looking at Jackson’s batting lineup, Parker will lead things off with Borders batting second. Bogenpohl, Hackworth and Ernst will be the heart of the order, as Hartlein, Malugen and Richardson should be batting sixth through eighth.

As only a sophomore, Bogenpohl led the Indians in home runs (four), runs batted in (27) and doubles (nine). Caden was also one of Jackson’s five batters to have a .300-plus batting average at .364, along with 32 hits and 21 runs scored.

“As a coach, you may see one side of a kid, and they may be different,” Coach Kitchen said. “What I’ve told Bogenpohl before is his best trait is his level headedness and coolness.

“He does not put off this vibe, ‘I am up here — I am so much better.’ He shows up and works very hard at practice and in the weight room. When he gets in the box, everybody gets quiet and his bat gets loud.

“I do think the sky’s the limit for him — he could probably do a lot of things because he’s so big. I don’t want to say he’s fast, but he runs fast enough. Fast for a high school kid, but when you project him in the pros, he would have solid speed.”

Even though a player like Hackworth transferred to Jackson from Sikeston, he has played with his now fellow Indians all throughout little league and up. Coach Kitchen said Baden is very physically talented with tremendous arm strength and has been hitting home runs in practice.

“Really with our first five batters, if a pitcher makes a mistake, they’re getting hit out of the ballpark,” Coach Kitchen said. “We feel really good offensively that we should be able to score runs and how physically talented this group is.

“There’s been times in the past where we had to bunt all the time to get runs, but now we’re at the other end of the spectrum. We’re almost playing gorilla ball because we’re trying to go for it.”

One member of this year’s senior class that would’ve been a standout on the mound and in the outfield for Jackson this season would’ve been Parkland Community College signee Will Richardson. Unfortunately, Richardson will miss his final season as an Indian after having Tommy John surgery.

Even though Jackson won’t have Richardson at its disposal this spring, Coach Kitchen still feels like he has plenty of talent with his top-two pitchers Drum and Bruns as well as plenty of depth behind them.

Coach Kitchen said he hates that Richardson won’t be able to play this year because he was never really able to “unleash” Will during his time at Jackson.

Kitchen went on to say that having a pitcher like Drum back, who has already signed with St. Louis Community College, is phenomenal because of his talent on the mound. Last season, Drum recorded the most wins for Jackson at 9-2 while producing a team-high 68 strikeouts and an earned run average of 3.37.

Bruns tied for the second-most wins last season with Ernst on the mound as they each had four apiece. Logan only suffered one loss, though, and he recorded 51 Ks with an ERA of 3.02.

Like Drum, Bruns is also throwing in the mid 80s and is another phenomenal arm when he’s “on,” Coach Kitchen said. He is a Division-I athlete in his own right as he has already signed on to play football at Southeast Missouri State.

Even though Bogenpohl only pitched 6.2 innings last spring, he’s another arm that will see plenty of time on the mound this year after pitching quite a bit for the Adidas Athletics this offseason. Kitchen said he and his staff have clocked Caden pitching as fast as 93 MPH, and he usually works between 88 to 91.

Another Indian Coach Kitchen is hoping for production from this season will be junior pitcher Kaden Kendle, who was described as being “really dominant” at the junior-varsity level last spring. Kendle has brought his velocity up to 82, 83 miles per hour and is a smooth pitcher, according to Kitchen.

Two seniors coming in relief will be pitchers Owen Evans and Cameron Marchi. Marchi, who was an all-state quarterback for Jackson’s football team this fall, returns as a player who went 3-0 on the mound and recorded 27 strikeouts and a team-best 1.98 ERA. Hackworth will also have closing duties, and he has hit upwards of 91 MPH while having “filthy stuff.”

“Owen Evans had some ups and downs last season, but he’s looked really good so far,” Coach Kitchen said. “He’s just a guy that can come in and get some outs. Marchi is a guy everybody remembers as a superstar quarterback, but he was an outstanding reliever for us last year.

“Marchi took that role of coming in and getting outs, and he’s the same guy now. He throws low 80s, but he can locate whatever pitch he wants — he’s really good at making people swing and miss. His best trait is his confidence in himself, which as a pitcher is off the charts.”

Another pitcher Coach Kitchen has been thoroughly impressed with heading into this season is sophomore John Paul Sauer. He missed all of last year with a knee injury he suffered during wrestling season, but he’s good to go on the diamond now.

“He’s always working in the upper 80s, and he has tremendous upside. To think he’s just a sophomore, too, so we’re really thrilled about him.”

Borders, who Coach Kitchen said has a “real knuckleball,” will rotate in at pitcher as well. Sophomores Adrian Fox and Carson McDaniel could also see time at pitcher if Jackson has to ever “dip down” into their staff.

“We know who are one, two and three will be, and we have guys who can come out of the bullpen and make spot starts,” Kitchen said. “I feel like we should be good enough offensively, where if we do have a rough day on the mound, we can kind of offset that. I feel like we’re pretty good defensively, too, so as long as we’re not walking everyone, we should be able to shoulder the load.”

What Coach Kitchen enjoys the most about this year’s team besides being probably the most physical he’s ever coached is that these players are very much baseball oriented.