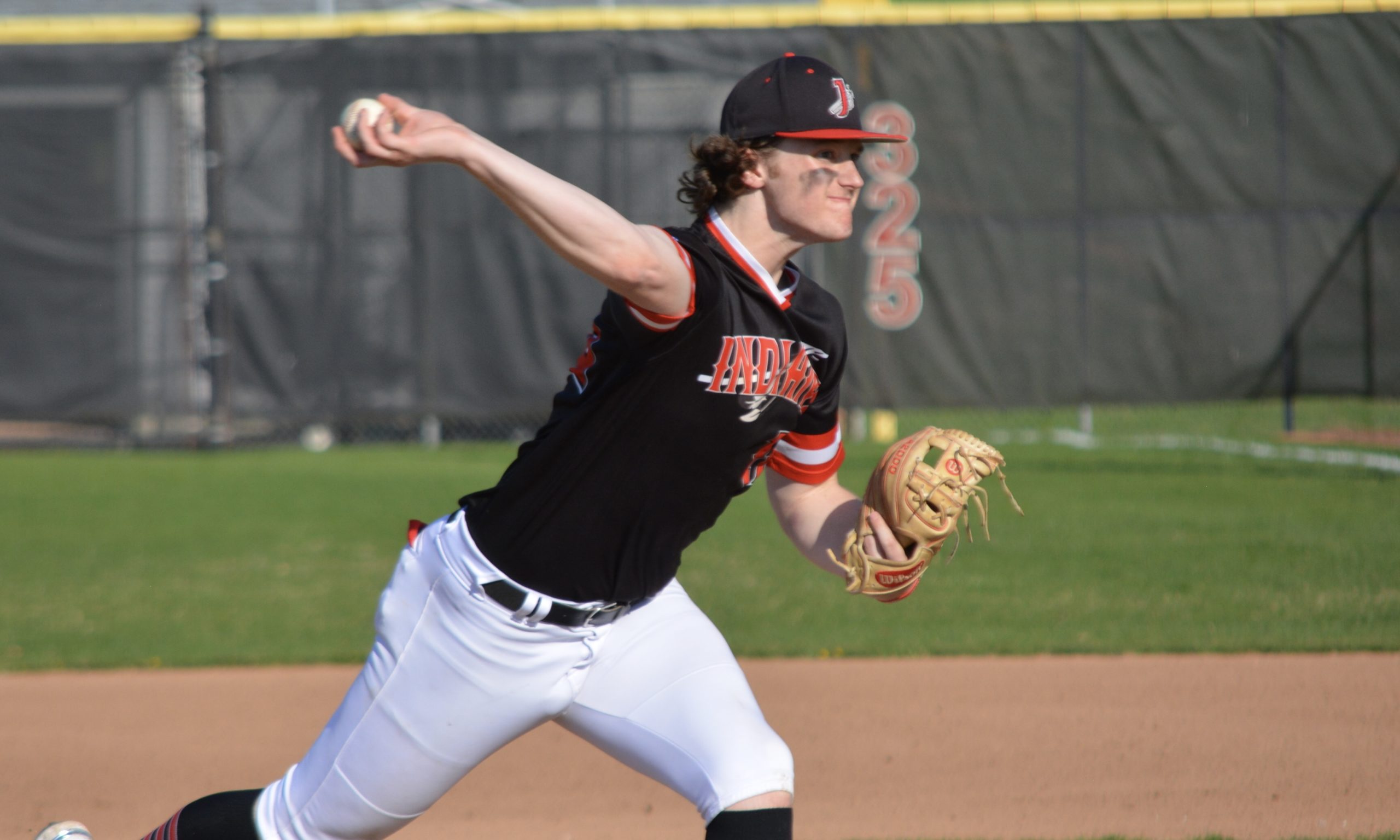 Junior Caden Bogenpohl struck out 13 batters through six innings in Jackson’s 7-3 win over Poplar Bluff in the SEMO Conference Tournament semifinals on Saturday at Capaha Field. Photo by Jay Forness

After suffering a seven-run loss to Class 6 District 1 and SEMO Conference rival Poplar Bluff on April 21 at home, the Jackson baseball team took down the Mules 7-3 in the conference tournament semifinals Saturday.

The Indians did so behind the arm and bat of arguably the top player in Southeast Missouri — junior Caden Bogenpohl, who is verbally committed to play college baseball at Missouri State.

Bogenpohl picked up the win on the mound by striking out 13 Poplar Bluff (8-12) batters through six innings and only allowed three runs, which all came in the top of the first inning.

The Mules were held scoreless, of course, through the remainder of the game as Jackson tied things up in the bottom of the third.

Jackson was able to get the tie-breaking run in scoring position as Saint Louis commit junior right fielder Baden Hackworth doubled in the next at bat. However, Poplar Bluff senior pitcher Kannon Carr forced a ground out to strand Hackworth.

Carr was one of the main reasons why the Mules downed the Indians 8-1 in their first meeting, which is where he struck out 12 Jackson players. Carr still had eight strikeouts versus the Indians this time around, but he also allowed eight hits and seven runs (three earned).

After a scoreless fourth inning, Jackson loaded the bases in the bottom of the fifth after Carr intentionally walked Bogenpohl. Carr was able to strike out Hackworth in the next at bat for out No. 2, but third baseman Quinton Borders forced an error for all three runs to be scored.

Borders reached third base and was drove in by senior first baseman Clayton Ernst on the next at bat for the Indians to take their final 7-3 lead over Poplar Bluff.

This win placed Jackson in the SEMO Conference Tournament Championship game, which the Indians played for against Kennett this past Monday (results will be in next week’s issue). Jackson fell to Kennett (16-2) by two runs, 5-3, prior to the beginning of the conference tournament.

Offensively, no Indian had more than one hit as all three of Jackson’s runs came in the top of the third. The first was scored off a ground out with three runners on base, the next a single by Borders and lastly an error.

In the first round of this year’s SEMO Conference Tournament, the Indians only needed five innings to take down Sikeston (5-17). Jackson came away with a 12-2 win as Borders (three hits, two runs batted in), Ernst (two hits, three RBIs) and Parker (two hits, two RBIs) each had multiple hits and RBIs.

Scoring a game-high three runs was Bogenpohl, followed by Borders and Parker with two apiece.

Earning the win on the mound versus Sikeston was senior pitcher Cayden Drum, who recorded four strikeouts and only allowed one hit.

Against district opponents Jackson is 2-1 as the Indians, of course, split with Poplar Bluff and beat Northwest handedly 11-1 April 15. Jackson was slated to take on Seckman April 13, but the game was cancelled due to inclement weather.