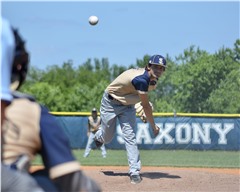 “Normal” is a word that is not in the dictionary right now, according to the Saxony Lutheran baseball team’s head coach Paul Sander. However, the Crusaders were as close to normal as a high school baseball team could get last Thursday afternoon.

Even though the coronavirus pandemic halted the Crusaders hopes of returning to the Class 3 Final Four, it was not going to prevent Saxony from playing this year.

The Crusaders hosted a varsity versus junior varsity doubleheader on Thursday, which became nearly a full day of baseball since the last game did not conclude until after 6 p.m.

“To be able to play in two games and have the fun everybody did, I think it meant a lot to everybody,” Sander said. “The kids were relaxed, and I told them before the game, ‘We’re going to have fun and kid around, but when the ball drops between the line in the first inning, it’s time to go. We’re not going to let the J.V. clip us.

Saxony’s varsity squad came away with two 10-run victories as they first defeated the J.V. 14-4 and lastly 15-2 to bring the day to an end.

“We had a hard time finding opponents to play,” Coach Sander said. “There’s a lot of summer ball going on, and some schools wouldn’t allow their kids to play. Playing the varsity versus the J.V. serves two purposes: No. 1 all the seniors get to play together on the same team, and No. 2 all the other kids get to play.”

Most high school teams in Southeast Missouri are only competing in senior showcases among conference opponents, which means juniors, sophomores and freshmen do not get to play for their school this year.

Lewis was unable to compete Thursday due to injury, and Brown had pitched two days prior in his summer league, which allowed senior pitcher Kaleb Kiefer to start game one. Kiefer threw a complete game and recorded seven strikeouts.

“Kiefer doesn’t play in the summer — he’s going off to college, and he’s not going to play anymore,” Sander said. “We wanted him to go as long as he could, and he told us in the fifth inning when he had one out, ‘I’m out of gas.’ He gave us a solid outing and pitched a complete game.”

Saxony had five players score multiple runs in Brown, Foeste, senior catcher Ethan Koenig, King and junior Will Ledure. Ledure also came up with a double and two runs batted as senior outfielder Devin Ponder also had an RBI of his own in game one.

In the final game, the Crusaders took an early12-0 lead, thanks to a 10-run inning in the top of the second, where they recorded six hits highlighted by RBIs from Bilek, Ethan Koenig, juniors Joel and Lane Koenig, Ledure and finally senior Matt Hartmann.

“I thought we had several guys have good games — Hunter Bilek had a great second game,” Coach Sander said. “Tanner King got hit [by a pitch] about five times, and I think that’s kind of his mojo this summer. He’s already been hit six times playing Legion ball.

“We hit some balls really hard — Devin Ponder hit some balls hard in the second game. I was just happy to see us out here and see the kids play. It’s as much fun for me as it is for them to be out here with them.”

Only two players from Saxony’s J.V. team were able to drive in runs as freshman Price Thurman recorded an RBI and also scored a run in game one. Fellow freshman Carson Birk drove in the Crusaders’ first and scored the last run of the final game. Another freshman Aaron Eubanks turned in a solid performance for the junior varsity squad as he recorded six strikeouts in relief during game two.

Three members of the varsity squad in Bilek, Foeste and Ponder were able to play in unfamiliar positions as Bilek took the mound for the first time since he was 12-years-old. Foeste became the first Crusader in program history to play every defensive position by going behind the plate at catcher for an inning.

“Hunter has wanted to pitch for a long time, and we gave him an inning — he did well,” Sander said. “Ponder wanted to pitch, so we got him a couple innings. We may have missed out on Hunter [as a pitcher], but he can’t play second base and pitch at the same time.

“I say this because we’ve had a lot of good plays — [Foeste] is the most versatile player that’s ever played at Saxony. I asked him how he thought he did catching, and he said, ‘I need work.’ I said, ‘Yeah, you do,’ but if he worked at it, he would get good at that.”

One of the only honors available this year was MHSBCA Academic All-State as Bilek, Brown, King, Ethan Koenig and Ledure were selected to the team.