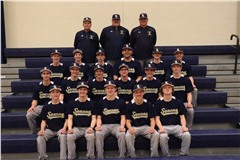 The Saxony Lutheran baseball team enters the 2018 season in its 11th year with head coach Paul Sander at the helm.

During this time, the Crusaders have produced an overall record of 159 wins, 88 losses and one tie including one district championship in 2009.

Saxony has been above .500 for three-straight seasons but has not reached a district title game in eight seasons.

“We’ve had good teams since [2009], but we just haven’t quite been able to get over the hump for a variety of reasons,” Coach Sander said. “We have numbers now — we feel good about our chances in districts this year. It’s a strong district.”

Saxony’s season came to an end to Arcadia Valley in the first round of the district tournament 9-6, which went on to fall to West County 9-7 in the semifinals.

“We go into every year hoping we can win the district,” Sander said. “We feel like if some of these guys step up and come on that when district time gets here we’ll be as good as anybody in it. That’s a long way off.”

The Crusaders will get an early look at three of their district opponents to start the season first at Woodland then will host both Jefferson and St. Pius X.

“We have to be ready to see what we have day one. We will not have a good seed in districts if we don’t perform well in those first three ball games all within a week.”

Heading into this season, the Crusaders are without three key contributors from last year due to graduation in pitcher/short stop Tyler Amos, pitcher Jacob Stueve and catcher Jake Wyatt.

Amos earned first team All-District honors last season as he went 4-3 on the mound with a team-high 43 strikeouts and an earned run average of 4.164.

At the plate, Amos held the team’s highest batting average at .444 with 20 hits and 17 runners batted in.

Wyatt only had four errors for a team-high fielding percentage of .973 as Saxony’s starting catcher.

Stueve pitched a total of 15.2 innings with 22  strikeouts for an overall record of 2-1.

“It’d be nice to have them one more year, but everybody else is losing a kid like that, too,” Coach Sander said. “We have younger guys who are waiting in the wings who didn’t get to play much last year that we feel real good about.”

The Crusaders return three all-district honorees with only one of them being named to the first team in junior Zach Meyr.

“[Meyr] could have a really good season,” Coach Sander said. “He has tremendous speed, makes good contact at the plate. We have high hopes for him this year.”

Coach Sander sees Walther as the team’s ace this season since he threw 31.2 innings last season for an overall record of 3-1 with an ERA of 1.547 and 36 strikeouts.

Another starter at the mound for Saxony this season will be junior Austin Fritsche, who started five games on the mound for an overall record of 2-1 with 31 strikeouts and an ERA of 2.366.

Also contributing on the mound for Saxony could be seniors Jonathan Klein and Trae Robinson. Klein has had issues staying healthy, but if he does stay well this year Sander thinks he will certainly see time there.

“The big 6-foot-8 basketball player Trae Robinson has talked about coming out and playing the last three years and hasn’t done it,” Coach Sander said. “He says he is coming out, and he is a left-handed pitcher. He throws the ball really hard. If we can work with him and get him refined to where he can throw strikes, he will be quite the imposing figure out there on the mound.”

Another player who helped lead Saxony’s basketball team to a second-straight district championship will be putting on the cleats in senior Austin Jarvis.

One player who Sander is expected to have a big season was the team’s only starting freshman from last season in sophomore Mason Lewis.

Lewis rotated as a starter in the outfield where he only had four errors. Batting wise, he finished with a batting average of .333 with 19 hits and 17 RBIs.

“The sky is the limit for [Lewis] — he is a very talented baseball player,” Coach Sander said. “He started full-time as a freshman, which is entirely unusual for us. We’ve probably had six or seven freshman start in the 12 years I’ve been here.”

There are seven players in this year’s freshman class for Saxony highlighted by Tanner King, a player Sander thinks could earn a spot on the varsity roster as a middle infielder and pitcher.

There are three things Coach Sander tells each of his players that if they indeed do them then they will be in most of the games they play.

“We want to throw strikes, we want to hit strikes and we want to play defense,” Sander said. “If you swing at strikes and have hitters, and we do. We’ve never been a team that’s not scored runs, so we have the guys that will score some runs if they hit strikes.

“Our pitchers, if they throw strikes and we have good defense, then we’ll have another good season.”

As far as Saxony’s batting rotation goes this season, Meyr, Walther and Hartmann will be at the top with their skillsets. Lewis will also be in the top five spots.

“Then you get to Richmond, [junior Jed] Jones and maybe Fritsche,” Coach Sander said. “Then you get to those last couple spots in the order are pretty wide open. There’s a lot of competition, and [sophomore Jack] Foeste will be in that competition.”

Sander said Foeste, who hit .206 and scored 12 runs last year, is a good contact hitter. He also said King could emerge in one of those spots.

“Freshman have the same opportunity as a senior, but it’s a little difficult when you’re a freshman and maybe haven’t fully matured physically and mentally,” Coach Sander said. “You’re up against seniors that have played four years with full beards and weigh 200 pounds. It depends on how that freshman reacts to it.”

Nonetheless, Sander believes his team will have more speed offensively than years past as far as getting to the plate and more stolen bases.

“I’ll bat a lead hitter with tremendous speed and then I’ll bat a nine hitter with tremendous speed, and the reason I do that is it gives me what I call a double leadoff man,” Coach Sander said. “So, if you have a guy hitting ninth that maybe doesn’t have quite as good of an average, you want that guy to have great speed. If he does get on then the table is set for the top. I’ll bat a guy with more speed ninth that could bat sixth or seventh.”