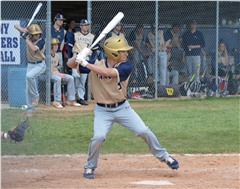 Before 2019, one could count how many Saxony Lutheran baseball players had ever earned all-state honors with two hands. Now you will need a friend to do so.

This year was the best season in Saxony baseball history as the Crusaders reached the Class 3 Final Four for the first time in school history, so naturally postseason accolades were on the horizon.

It had been since 2013 that any player from Saxony was named all-state, but juniors Hunter Bilek, Jack Foeste, sophomores Eli Brown and Tanner King officially ended that drought. Bilek and Foeste were named to the first team, while underclassman Brown and King garnered honorable mention.

This was also the first time in a decade that multiple Crusaders earned all-state honors, with the last time being in 2009 as Garrett Fritsche, Chris Roth and Bret and Bryant Steffens did so.

“Obviously you’re going to have to have a really good year to get multiple players on the all-state team,” Saxony’s longtime head coach Paul Sander said. “It’s a reward for your season and how well they played.”

Bilek was able to lead Saxony in multiple offensive categories among starters as the team’s leadoff hitter, ranging from batting average (.425), on base percentage (.557), hits (37), home runs (two) and runs scored (37). Bilek was second in stolen bases with 14. He also serves as the team’s second baseman, where he recorded a fielding percentage of .896 with 33 putouts.

“He’s the ultimate leadoff hitter — he has great speed, makes good contact and he just got red hot during the last fourth of the season,” Coach Sander said. “When we got into the state tournament, he performed really well. He stepped up and showed everybody what he could do offensively and defensively.”

Foeste, who has been Saxony’s utility player for the past two seasons now, paced Bilek with a batting average of .349 along with a .509 on base percentage, 29 hits, one homer and 23 runs. He also led Saxony in stolen bases with 17 and was second in runs batted in with 24.

Foeste plays multiple positions throughout each season depending on who is pitching. If senior Austin Fritsche was on the mound, Foeste would be at third base. If Brown was pitching, Foeste would be at first base. While doing this, Foeste only had five defensive errors (.940 fielding
percentage) and finished third on the team in putouts with 62.

“He’s the ultimate utility guy — I don’t know if you could define a better utility guy than Jack Foeste,” Coach Sander said. “We used a four-man rotation in our pitching staff this year, and every time we used a different pitcher Jack moved positions. He never played the same position two games in a row.”

Through the first six games of the season, Bilek was batting second in the lineup while Foeste was in the middle of the order at fifth. Coach Sander decided during the Oak Ridge Invitational that it was time for a change as Bilek moved up one to the leadoff spot and Foeste went up to second.

“It was really the only big lineup change I made the entire season, and as it turns out it worked out real well all the way around,” Sander said. “Your No. 2 hitter, you want him to be a contact guy, you want him to be able to move runners and spray the ball around all over the field. Jack did a great job of that — he’s an outstanding spray hitter, and he’s got a little pop, too.”

Another thing Coach Sander wants from his second batter in the lineup is to be walked, which Foeste was a team-high 23 times as Bilek finished behind him at 21.

Batting behind Bilek and Foeste is Saxony’s three-hole hitter King, who in his second year with the program averaged .342 with 25 hits, 12 doubles, a team-high 26 RBIs and scored 22 runs. He was also walked 16 times.

At shortstop, which Coach Sander regards as the most difficult defensive position in baseball, King only had three errors for a fielding percentage of .965 with 27 putouts.

King’s all-state sophomore season does not end there because he also served as one of Saxony’s four starting pitchers. On the mound, King was the only starter to finish undefeated at 5-0 with an earned run average of 2.21 and was second in strikeouts with 57 through 38 innings.

“[King is] a fantastic defensive shortstop — very smooth and very polished on the infield,” Coach Sander said. “He takes good routes to balls, he circles the ball well and he goes to his left and right laterally well. He has a good arm, and he’s one of those guys that works all the time. He’s in the weight room and does the work.

“At the plate he gives us a different look because he’s a left-handed hitter. … He’s got some good pop in his bat to hit it in the gaps, which is what you want out of your three, four and five guys. As far as maturity and being polished, he is past his years.”

Seeing the most time on the mound for Saxony this season and becoming the team’s ace was left-hander Brown, who finished 7-2 overall with a team-low ERA of 1.64 and had 63 strikeouts in 55.1 innings. Brown’s strikeout total ties him for fourth all-time in the program’s single-season history with 2018 graduate Jakoata Walther.

Before this season, Brown had both of his hips operated on because they were not aligned correctly. Following the surgery, Coach Sander said he looked like a completely different player.

“Being a left hander and being big and tall — [Brown] has a lot going for him in the future if he continues to work,” Sander said. “With four pitches and commanding all of him the way he does — he had seven starts where he was unhittable. He had a start or two at the end of the year where his command wasn’t quite as well or his ERA would’ve been under 1.”

On top of placing third in Class 3, Saxony won a single-season, program-record 23 games. By returning four all-state players and only losing three starters to graduation, the Crusaders hope to be playing at state again in 2020.