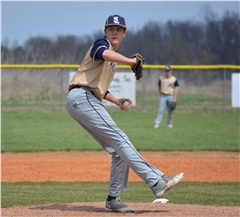 The Oak Ridge Tournament was only two rounds this year due to weather, and the Saxony Lutheran baseball team went undefeated in the two games it hosted.

The Crusaders faced St. Paul Lutheran on Friday and won 9-5 and finally went up against Woodland Saturday and defeated the Cardinals in six innings 11-1.

Saxony (6-2) recorded a total of 26 hits on top of its 20 runs in the tournament, while junior Mason Lewis and sophomore Eli Brown picked up wins on the mound.

Brown had quite an impressive showing against Woodland (5-4) in the final game of the tournament, pitching a complete game with four strikeouts while allowing six hits and one run in the first inning.

“A lot of high school kids I would call throwers, but Eli Brown is a pitcher,” Saxony head coach Paul Sander said. “He’ll mix his pitches — he’ll go up and down, he’s got an excellent curveball and his fastball is improving. If we can keep getting games like that out of a sophomore left hander, we’ve got something to work with there.”

Brown’s produced two outs but walked a batter before allowing his lone run of the day, which came off a double to left field. Another pressure situation for Brown came in the top of the sixth when with one out, Woodland loaded the bases.

Brown forced the next two batters into ground outs as he made a throw to catcher Ethan Koenig for the second out as sophomore short stop Tanner King made the throw to first base for the final out.

“I think he’s very calm,” Coach Sander said. “For a young kid, he’s not rattled and seems to keep his composure on the mound. He has an idea of what he wants to do out there, and he was able to execute it.”

One reason to why Saxony has had so much success at bat in these last two games could be because of the lineup change Sander decided to make for the tournament. Senior center fielder Zach Meyr and Mason Lewis both were moved out of the top three and batted fifth and sixth respectively.

At those spots in the lineup,  Lewis and Meyr combined for five hits, four runs and four runs batted in over the last two games.

“I don’t know that the lineup change means anything more than just trying to do something different and kick start the offense,” Coach Sander said. “When you move Meyr from one to six, you put tremendous speed in the middle of the order. I’m not so sure you can’t utilize his speed just as well at the center [of the lineup] as you can at the very top.”

Against Woodland, Meyr recorded two bunts for hits and scored one run, while Lewis had one hit, one RBI and finished with two runs.

Four of the Crusaders runs came in the first inning as three were scored off wild pitches since the Saxony baserunners were able to position themselves to third. Saxony has recorded a total of 29 stolen bases through eight games as Bilek and Foeste are tied for first with seven apiece.

Saxony scored five in the bottom of the sixth as King was hit by a pitch with the bases loaded for the team’s 11th and final run.

“I told them between innings, ‘Let’s score here. Even if it’s one run,’” Coach Sander said. “I felt the momentum was just a little bit going back toward them even though they were running out of chances. You have to keep plugging — you can’t get a four or five run lead and start stringing up zeros.”

Before the tournament, Saxony was able to pick up a 4-3 win over Charleston as senior Austin Fritsche recorded a walk-off single in the bottom of the seventh. The Crusaders will meet the Blue Jays once again in a doubleheader on May 4.