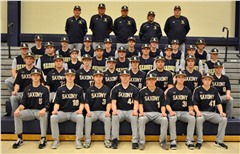 For the first time in program history last year, the Saxony Lutheran baseball team was able to reach the coveted final four and ended up placing third overall in Class 3 to finish 2019.

Saxony returns nearly every starter from last year’s third-place squad along with all four of the team’s all-state selections, which were seniors Jack Foeste and Hunter Bilek and juniors Eli Brown and Tanner King.

Bilek and Foeste, who batted No. 1 and 2 in the Crusaders lineup last season, each garnered first team all-state, while Brown and King were named to the honorable mention team.

This will be the 14th season at the helm for Crusaders head coach Paul Sander, who has helped lead Saxony win three district championships along with two sectional titles. Sander is also only two wins away from reaching 200 for his career.

“Winning certainly breeds excitement, and we’ve been fortunate to have good clubs and good players,” Sander said. “To get as far as we did last year, you have to have a little luck as well as good players. We were fortunate in the sectional and quarterfinal game to walk it off, and it could’ve just as easily went the other way.”

To start 2019, the Crusaders split their first four games but then won 10 in a row and managed to not lose once at home. Saxony also outscored opponents by 107 runs as the team put up 207 and allowed 100.

Heading into this season, Coach Sander believes the players returning who competed in last year’s final four enter the year with an edge.

“When you’re going into district and sectional finals, you’re learning how to win those type of close ball games,” Coach Sander said. “You’re learning how to deal with that type of pressure because it is pressure. A lot of these guys coming back have been through that, and they shouldn’t be intimidated by having to go through it again.”

Back at the top of the batting order will be Bilek, Foeste and King, who each recorded a batting average above .340 last year.

“I don’t know what more [Bilek] can do,” Coach Sander said. “You just hope he has a similar year. He’s developed himself into an outstanding, well-rounded baseball player. He has no noticeable weaknesses in his game.”

Foeste finished second behind Bilek in batting average with a .354, while also coming up with 29 hits, 24 runs batted in, 23 runs scored as well as a team-high 23 stolen bases. Foeste also managed to record a fielding percentage above 90% at 92.9.

“[Foeste] is another Bilek — we just hope he gives us what he gave us last year,” Sander said. “He’s the most versatile player that I have ever coached in 14 years. He’s the best I’ve ever had at being able to move from spot to spot — you’d never notice a defensive difference. That’s very, very hard to find, and he is really smart.”

As for King in his second year as Saxony’s starting shortstop and batting third in the lineup, he finished with a .342 BA and 25 hits. He also recorded a team-high 26 RBIs and 12 doubles along with 22 runs and finished third behind Bilek and Foeste in stolen bases with 16. He also recorded a fielding percentage of 96.5%.

“King is a slick-fielding shortstop,” Sander said. “He’s extremely knowledgeable about the game and also has no noticeable weakness in his game. He will be a highly recruited high school baseball player in another year and could go at a pretty high level.”

Another key returner will be senior Ethan Koenig at catcher, who was named second team all-district after batting .324 and had 24 hits, 16 RBIs, 12 runs and also had nine stolen bases in 2019. He finished with a 95.5% fielding percentage with 168 throw outs.

With Brown returning as Saxony’s ace, the Crusaders bring back three of their top four pitchers as King and senior Mason Lewis also return to the staff. These three pitchers combined for an overall record of 17-3 with 163 strikeouts last season.

“I feel like our pitching with those three and the other guys we have are as good as any Class 3 team in the state,” Sander said. “I think we’re deeper. I think there’s a lot of good Class 3 teams and [repeating our success] is not a walk for us. Where we separate ourselves is we’re deeper at pitcher with King, Lewis and Brown. There’s not very many teams that have three of our caliber.”

Brown was able to earn all-state accolades for the first time in his career by going 7-2 on top of recording a team-high 63 Ks and 1.64 earned run average.

“Brown is bigger and stronger [this year],” Sander said. “He’s 6-3 and gained about 15 pounds. He’s always had good command and control of the three or four pitches he has. His fastball is going to be higher miles per hour this year.”

King managed to go undefeated on the mound last year with a 5-0 record while having the second-most strikeouts at 57 and posted an ERA of 2.39.

“The ultimate would be that we could plug Mason Lewis into the four spot this year and go back to hitting like he did two years ago,” Coach Sander said. “It would kind of be like getting a whole new player. He didn’t give us whole lot offensively last year till late, but if he gives it to us earlier this year it’ll be like having another hitter.

“He’s a slugger — he’s a power guy and will hit the ball in the gaps and hit a home run or two this year. He has tremendous power, so we’re looking for Lewis to have a big comeback year to have a great senior season.”

Other pitchers who will see more time on the mound for the Crusaders this season includes senior Kaleb Kiefer and juniors Will Ledure and Lane Koenig. None of these players threw more than nine innings last spring.

Coach Sander could also be calling on a freshman in Price Thurman, who is a left hander like Brown and transferred from Twin Rivers, to help complete this year’s pitching staff.

Saxony graduated a total of seven seniors after last year’s historic season including starters such as Austin Fritsche, Zach Meyr and Isaac Ringwald.

Fritsche served as one of the Crusaders top pitchers by going 5-1 overall and struck out 53 batters while finishing with an ERA of 3.43. At the plate, Fristche had a .342 batting average along with 25 hits, 23 RBIs, 23 runs and stole 12 bases.

Meyr had Saxony’s third-highest batting average at .349, while he also finished second in hits and runs with 30 and 24, respectively. Meyr also nearly had a perfect fielding percentage in center field at 97.5%.