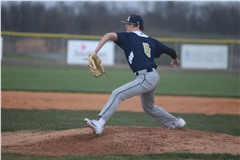 In the first round of the Class 3 District 3 Tournament, the Saxony Lutheran baseball team (16-6) was able to avenge a regular-season loss to Jefferson (10-13).

It was the Crusaders home opener when they fell to Jefferson 7-2 where senior Jakoata Walther (5-2) earned his first loss of the season on the mound.

This time around, Walther was able to pitch a complete game as he only allowed one run off one hit and two walks with nine strikeouts.

Walther also had a fairly impressive day at the plate, tying for the game-high in runs batted in at two while also recording two hits.

The first score of the game was when Walther was able to reach on an error off a ground ball to send sophomore Mason Lewis home from second base in the top of the first inning.

Leading the game in hits at three was Lewis, who tied with Walther for a game-high two RBIs while also tying for the game-high in runs at two with junior Zach Meyr.

Lewis went 3-for-4 in the game as he recorded his first hit with a double to put him in scoring position in the first. He then singled out in right field to send sophomore Hunter Bilek home from second and Meyr to third base.

Walther then singled to left field for Meyr to score, putting Saxony on top over Jefferson 4-0.

The Crusaders final two runs came in the sixth inning as Lewis drove Meyr home off a line drive single.

The final run for Saxony came on a wild pitch, which sent Lewis home after he stole second and advanced to third off another wild pitch.

Saxony faces No. 1 seed West County (14-4) in the district semifinals with the championship game on the line, something the Crusaders have not been able to reach since 2009.

This is when Saxony was in Class 2 District 3 and won the title by beating Kelly 6-4 to reach the state playoffs.

Following the team’s 8-0 loss to Chaffee on April 25 at home, Saxony head coach Paul Sander wanted his team to focus on making better contact with the ball against better pitchers.

“We’ve had big success this year when we see pitchers who are plus average to good, but when we face pitchers that are plus good to excellent we’ve struggled a little bit at the plate,” Coach Sander said. “We’re going to turn up the pitching machine and shorten it up. We’re going to maybe spread out our stances a little bit and shorter strokes to see if we can make more solid contact.”

The Crusaders have compiled a record of 4-2 following the shutout loss to Chaffee while outscoring opponents 39-28.

Five of the team’s starters are currently hitting a batting average of .329 or better with Walther leading the way at .380. He also leads Saxony in hits at 27 and is second in RBIs with 28.

Ahead of Walther in RBIs is Lewis with 30, who currently holds a batting average of .364 (second among starters) and is tied for second in hits with Meyr at 24 as well as runs with sophomore Jack Foeste at 26.

Lewis is one of Saxony’s top pitchers as he holds a 5-2 overall record with a 2.96 earned run average with 27 strikeouts.

Walther is also 5-2 on the mound with an ERA of 2.01 and has struck out 63 batters this season, which ranks him fourth all-time ahead of 2012 graduate Jon Winkler in the single-season record book.