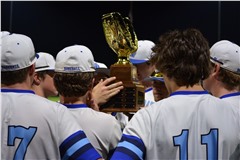 The Indians (19-7) scored first blood with one run in the top of the first inning as senior Landon Hahn crossed home plate, which was his 39th of the season for a program record.

This ended up being Jackson’s only run of the game, allowing the Bulldogs (17-6) to make a comeback in a four-run inning in the bottom of the fifth.

Senior Layne Robinson, who is also Notre Dame’s lead-off hitter, came up with a three-run triple off a line drive near the right-field foul line. Robinson scored on the next at bat as junior Tyler Landewee grounded out at first base.

The bases were loaded after the Bulldogs came away with three-straight hits from the bottom of the order by sophomore Austin Gast, senior Cayden Dannenmueller and junior Kam Dohogne.

“You just have to take advantage of your opportunities,” Notre Dame head coach Jeff Graviett said. “You’re going to get some, and that’s when you have to get that big hit. We didn’t really get that early on Saturday — we were struggling to get that big one. Tonight, we got it, so we put that crooked number up on that board and give Kam breathing room.”

It was a duel on the mound between two of the top pitchers in the SEMO Conference as Dohogne (4-2) pitched a complete game for the Bulldogs, while senior Tyler Martin (4-1) went 5.1 inning and allowed four runs off seven hits. This was Martin’s first loss since 2017.

Dohogne allowed five hits for one run and only walked one batter while recording a game-high eight strikeouts, which was one shy of his season-high of nine. Dohogne recorded nine Ks in his previous start against conference opponent Sikeston April 23.

“[Dohogne] has been phenomenal — he’s a competitor,” Coach Graviett said. “That’s the big thing you can put up against him — he’s a really competitive kid. You see it on the basketball court, and he brings it on the baseball field. It’s you versus him at the plate, and he tries to win every battle.”

Martin was replaced in the sixth inning after senior Ben Jansen hit a double and walked Gast to bring in freshman Will Richardson, who walked one batter but forced two more outs to strand two runners.

Jackson’s offense recorded a total of five hits, which only came from three players. Hahn recorded his first and only hit to start the game, while junior Seth Spraggs produced a game-high three hits batting behind Hahn. Spraggs also had the Indians only run batted in.

Senior Seth Essner hit a grounder in the top of the seventh inning as fellow senior Boone Gartman was hit by a pitch in the next at bat for Indians to be on base with only one out. However, Martin hit a pop out to third base and Dohogne recorded his eighth and final strikeout of the game against senior Sean Cheney for the win.

“It was a team win — that’s the thing we’ve been talking about is coming together as a team and doing the little things from the mound,” Graviett said. “The defense was phenomenal again today and we had timely hitting, so if you put those three things together you’re going to be tough. They’re really starting to play well, and we don’t want to be playing our best baseball right now as we still have a few weeks left before the postseason.”

Notre Dame has earned the top seed in this year’s Class 4 District 1 Tournament, which begins on Saturday. The Bulldogs have a first-round bye and will either face No. 4 seed Perryville or No. 5 Doniphan in the semifinals Monday. The tournament will be held at Sikeston, which Notre Dame defeated 15-4 to win it all last season.

Jackson played two games following its loss to the Bulldogs, starting with Greenville on Friday and finally Woodland Saturday. The Indians topped Greenville 10-4 and shutout the Cardinals 7-0.

Jackson was also seeded first in its own district tournament for Class 5 District 1, which also begins Saturday in Seckman. The Indians will either face Cape Central or Hillsboro in the semifinals Monday, with the district title game set for Tuesday.

The Indians have won districts three of the last four seasons and are hoping to capture their fourth district title under head coach Bryan Austin before his resignation.

Austin will resign following this season to become the assistant principal for R.O. Hawkins Junior High.

During Austin’s stint with Jackson starting in 2014, the team has won 119 games with 66 losses, and the Indians have also come away with two sectional championships.