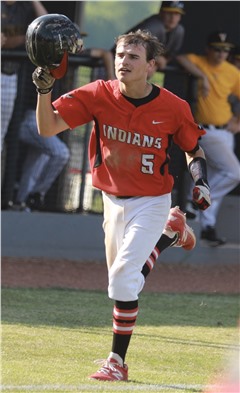 The Jackson baseball team advanced to the Class 5 Quarterfinals for the second time in three years, but the Indians were up against nationally ranked Vianney this time around.

Jackson (22-9) managed to take a 2-1 lead over Vianney (35-2) in the top of the fifth inning after senior Justice Crosnoe hit the Indians second solo home run of the game over the left-field wall.

“We stood toe-to-toe with [Vianney] for five innings right there and had them on the ropes,” Jackson head coach Bryan Austin said. “Unfortunately, we are a couple of defensive miscues away from getting out of the inning.

“Worst-case scenario it would just be a tied baseball game, but [Vianney] came away with a couple more runs.”

The miscues Austin is speaking of came after Jackson took a 2-1 lead when the Golden Griffins tied the game after a wild pitch in the bottom of the fifth inning.

On the same at bat, sophomore CJ Cepicky singled on a ground ball to right field to send another run home for Vianney to take a 3-2 lead.

Cepicky was able to advance to second base on a wild pitch during senior Dominic Moro’s at bat, who then drove Cepicky home on a line drive to center field.

Down 4-2 after allowing a total of eight hits, senior Cole Welker’s day on the mound for Jackson was finished.

The Indians went three up, three down in the top of the sixth after allowing three runs, which led to Vianney scoring its final five runs in the bottom of the inning to secure the win.

The Golden Griffins first four runs of the inning came after relief pitcher junior Lance Kluesner loaded the bases with no outs.

Junior Boone Gartman came in to pitch for Kluesner after the fact. Gartman recorded the first out of the inning after junior catcher Tyler Harris recovered a wild pitch and threw it to Gartman to tag out the runner trying to steal home.

Next to bat with the bases loaded and one out was Mizzou signee senior Luke Mann, who had 10 home runs and 53 runs batted in coming into the game.

On the first pitch, Mann sent Gartman’s throw over the right-field wall for a grand slam to give Vianney an 8-2 lead over Jackson.

The Indians were able to hold Vianney scoreless for the first three innings as they took a 1-0 lead in the top of the second, where Harris recorded the first home run of the game.

After his homer, Jackson was able to load the bases with two outs but failed to score another run in the inning.

Jackson was up against two future Division-I arms in senior Noah Niznik (SEMO) to start and Mitchell O’Dekirk (Murray State) in for relief.

Jackson was able to finish with seven hits as Crosnoe, Harris and junior Landon Hahn finished with two a piece.