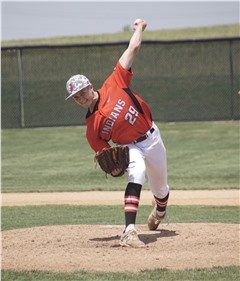 The all-state teams for baseball were released last week as Jackson had one player selected in Class 5.

Junior Tyler Martin, who went 9-0 as the Indians ace this season, was named first team all-state along with four other pitchers.

All the other pitchers named to the first team were seniors, so Martin will be the only one returning for the 2019 season.

Martin’s nine wins is the most by a pitcher in Jackson history, breaking the previous record of eight held by Tyler Beussink, which he set in 2005.

Martin broke another pitching record of Beussink’s for earned run average (.95) with an ERA of .77.

On top of that this year, Martin threw two-complete game no hitters in back-to-back starts against SEMO Conference and Class 5 District 1 opponents Cape Central and Poplar Bluff in April.

Martin was named the conference’s Pitcher of the Year and earned all-conference honors.

Prior to the beginning of the season, Crosnoe signed with Southwestern Illinois College. Welker signed with Fontbonne following the season.

Martin only had two starts his sophomore season and went 2-2 overall by recording two saves with an ERA of 1.67 and had 20 strikeouts.

Martin recorded a team-high 50 Ks this season, which was 11 strikeouts more than the team’s runner-up Welker, who recorded 39 Ks in nine starts with a 5-2 record.

Returning to the mound with Martin for the Indians in 2019 will be fellow juniors Tanner Hecht and Lance Kluesner, who combined for seven starts.

Hecht (3-1) started five of those games while striking out 27 batters, but he finished with an ERA of 3.35.

Kluesner recorded a team-high three saves for Jackson for an overall record of 3-2 with 25 Ks and an ERA of 3.00.

These players helped lead Jackson to its fourth-straight 20-plus win season under head coach Bryan Austin, who now has 100 career wins and 59 losses at the helm.

The Indians also captured its second district championship in the last three years and reached the quarterfinals for the first time since 2015.