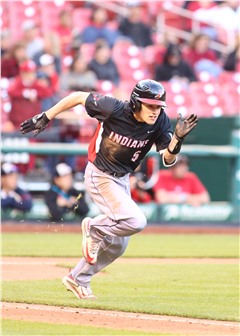 However, the Indians failed to win their third-straight Class 5 District 1 Championship as they fell to Poplar Bluff 8-0 in the title game.

Head coach Bryan Austin enters his fifth season at the helm for Jackson, who also became the winningest coach in the program’s history last  year with 78 victories through four seasons.

“I think a lot of [our success] goes on our expectations from our coaching staff to our kids and being consistent in what we do,” Coach Austin said. “Our kids expect for us to have a rigorous offseason. They also expect for everything to be very detailed in practice, and now they do not know a different way than the way we have done things.”

Coach Austin says this allows players coming through the program to be in a system they are comfortable with. He also praised his assistant coaches at the lower levels for being detail oriented to try and prepare them for varsity action.

This year the Indians will only return three primary starters from last season. One of these players is senior infielder Justice Crosnoe, who earned second team All-State honors last year as Jackson’s second baseman.

As a junior, Crosnoe was able to break Jackson’s single season runs batted in record of 33 with 36 RBIs accompanied by a .415 batting average, which is the program’s fifth all-time leading average.

Crosnoe, who signed his National Letter of Intent to play for Southwestern Illinois Community College March 2, only had four errors at second base last season.

“[Crosnoe and Welker] are two guys that I forsee right now being our No. 1 and 2 in the batting order just because of their ability to put the ball in the gap and then they’re going to be a threat on the bases no doubt,” Coach Austin said. “Cole is probably the best leadoff hitter I’ve ever coached from the area of patience in an at-bat.”

Six of Welker’s hits were triples, which tied him for first all-time in a season for Jackson with Landon Mills, who set the record back in 2014.

Welker’s mark of 38 runs also ties him in first place for the program record with Tyler Qualls (2010) and former teammate Jarrett Newell.

Five of these former Indians, Brown, Dobbs, Knight, Newell and Weber, played and started in 30 or plus games last year as Dobbs earned second team All-State honors along with Crosnoe.

With all of these players now gone, one primary focus this offseason has been on maturing younger players in order to get them ready to fill positions.

“In the summertime and the fall and winter for us has been trying for those guys to get caught up and get a lot of reps on their own to make them able to be a valuable person on the varsity level,” Coach Austin said. “A lot of our seniors this year had a lot of summer action, so I’m pretty excited about where they have come from. Some of our juniors played at the junior legion level, which is good quality action, but we also realize that sometimes that doesn’t translate to the varsity action.”

Austin said that level of play sometimes doesn’t transition well into varsity because of Jackson’s schedule, which is Class 5 dominant.

Junior Landon Hahn is the team’s final returning starter, who batted .208 with 15 hits, 10 RBIs and scored 10 runs last year with zero errors defensively in the outfield.

Hahn is going to move to shortstop this season to replace Newell.

Coach Austin said this is one of the first seasons  where he has walked into the first practice without a full depth chart based off prior seasons, but he is confident that his juniors and seniors can fill primary roles.

“Where we’re starting it’s going to be competing for starting jobs for 15-straight days to see where our lineup will be day one,” Austin said. “I’m looking forward for some juniors that are now seniors being able to step up into their roles and want to win a job. At the same time you want to see those sophomores and junior kids competing hard for that starting position, and it’s going to make for a fun two weeks of practice.”

Coach Austin continued to say when teams usually get to the 14th or 15th day of practice that they are just ready to play, but his team could be in a situation where there is a “heated battle” at a position to determine the starter.

Heading into this year’s pitching staff, Coach Austin knows he does not have the top-tier velocity arms like he has had the past two seasons with Weber, who holds the record of single-season strikeouts with 89.

Austin does believe this year’s team has better depth than years past as he said he is comfortable with throwing six to eight pitchers at the mound.

Austin said the depth his team presents on the mound this year will be vital when it comes to playing in tournaments.
One of Jackson’s top returning arms this year is junior Tyler Martin, who came in relief last year and started twice throwing for 21 innings with a 1.667 earned run average for a record of 2-2.

“Tyler was in a position last year where he had to grow up really fast because we were not very deep on the mound,” Coach Austin said. “So we had to rely on Tyler as a sophomore to jump in, and he did a fantastic job. He had some growing pains in the season, but towards the end of the year he did a great job for us.”

Coach Austin said he and the staff are still looking at what players they will start at pitcher week-to-week, but he said Martin will be one of the team’s top two arms. Welker will also see more time at the mound this year than he did last, only throwing 12.1 innings in 2017.

“Carson Barnes is going to see more time on the mound this year than he did last year,” Austin said. “He’ll probably also move from catching and third base from over to first base and compete for that job. One younger guy who will see the mound quite a bit is Tanner Hecht, who is a junior but was on JV last year and had a fantastic season there. We have a senior left-handed pitcher, who had limited innings last year in Coley Leimbach.”

The Indians begin their season this Friday as they will host Neelyville at 4:15 p.m.