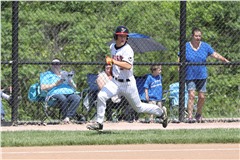 In the semifinal round of the Class 5 District 1 Tournament, the No. 1 seeded Jackson baseball team faced off against No. 5 seed Northwest Saturday, May 13, at host Hillsboro.

Senior pitcher Colten Weber started at the mound for the Indians and threw five scoreless innings with 10 strikeouts and three walks all coming in the sixth and final inning of the game.

Through the first four innings, Weber and Jackson’s defense did not allow a single Northwest batter to get on base before allowing the Lions only run in the fifth inning on a line-drive single with a runner on second base.

Head coach Bryan Austin’s goal for his team heading into the game was to be the first team to score, and the Indians did just that in the bottom of the first inning.

In fact, Jackson took an early 6-0 lead over Northwest in the bottom of the inning starting with a double by Weber to bring leadoff hitter junior Cole Welker home for the first score of the game.

The bases were loaded with the next at bat since junior Justice Crosnoe was hit by the pitch with Jackson only having one out.

Sophomore Landon Hahn, the same batter who ended up having the walk-off hit for Jackson, drove in two more runners off a line drive to left field.

Northwest made two pitching changes in the bottom of the first, and even walked senior Tyler Knight following Hahn’s at bat to load the bases once again.

This walk forced the first pitching change, which led to senior Drew Brown doubling on a fly ball for two more runs allowing Jackson to take a 5-0 lead still with only one out in the inning.

Jackson’s next batter, junior Bo Goddard, was sent to first base after being hit by the pitch following Brown’s double to load the bases for a third and final time in the first.

This forced Northwest to make its final pitching change, and the pitcher who was brought in walked Welker for Jackson to score its final inning of the first.

Northwest forced Jackson into a double play following the walk to end the inning.

Weber had four of his 10 strikeouts in the first two innings to make quick work of the Lions batting order.

The Indians failed to score in the next two innings thanks to pop ups and grounders, but extended their lead to 8-0 in the fourth.

Jackson scored its first run in the bottom of the fourth thanks to Weber sending senior Jarrett Newell home from third off a bunt.

The next run the Indians scored was when senior Braeden Dobbs was able to cross home plate off an error during a ground out by Hahn.

Jackson only needed one more run, and to keep Northwest scoreless and off the bases in the fifth inning for Weber to have thrown a perfect game for an Indians win.

Weber forced the first two outs of the fifth via fly ball and a grounder, and only needed one more out to be perfect through five innings.

On a 3-2 count with two outs, Colten Weber allowed Northwest’s batter to hit a double into left field, which ended up being the one runner to score for the Lions.

“I got through the first couple innings just doing really good — never really thought about the perfect game I had going,” Weber said. “I missed high to him twice, so I knew I had to come back with some fastballs in some easy hitting spots — so I knew that was going to be tough.”

Weber went on to say it was not a big deal to him, and it would have been hard to complete the perfect game.

Weber continued to say he was more frustrated with the second hit because Weber said he should have beat him, and he ended up beating himself up over losing the matchup.

Weber was able to complete the game for Jackson having to continue in the sixth inning where he loaded the bases with three walks.

“I couldn’t find it right off the bat,” Weber said. “I guess I took my foot off the gas, which I shouldn’t have. They ended up getting on base — I couldn’t locate as well. I was like, ‘Well, you’ve got to step on it, Colten.’ So I came back and worked my way through it”

Weber forced a pop up for out number two, which he caught, and then struck out the final batter swinging to end the sixth inning.

“Colten was absolutely phenomenal today — this is one of his best starts of the year,” Coach Austin said. “And we also had great defense behind him today, and we didn’t get to a situation where we led off the accelerator — we stayed on it the entire game, and we put ourselves in a spot in the last inning where we were going to have to make a change at pitcher at some point, but because of our offense, we didn’t have to do it.”

In the sixth is where Jackson put the game to rest by scoring three runs back to back with Hahn hitting a one-run walk off to send Weber home for the final run of the game to win 11-1.

With this win, this year’s team is now the winningest team in program history with 23 wins. The win also made Coach Austin the winningest coach the program has ever had at 78 wins passing former head coach Samuel Sides total of 77.

Coach Austin said he looks back to his first team in 2014 as when the system he implemented all started.

“Now because of that team and being able to move on and win that first district title in 2015, we reap the benefits now,” Coach Austin said. “Now it’s not a second thought — it’s just a mindset. This is how we are, this is what we do and that’s how we take care of business.”