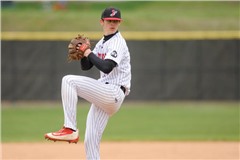 Senior pitcher Colten Weber is entering his final season with the Jackson baseball team after a junior year where he broke the program’s strikeout record with 89.

Not only is Colten gunning to break his own record this year, but he is getting to wear his brother Nolan’s former jersey number 11 for the last time in Jackson baseball history.

Colten’s brother passed away four years ago after a three-year battle with brain cancer, and he has had the privilege of wearing Nolan’s numbers in both soccer and baseball ever since he has been at Jackson.

“It’s an honor because even if Nolan weren’t my brother and I actually got to wear that number — I would feel blessed,” Weber said. “That kid, he was a work horse, and he did anything and everything to make himself and his team better.

“Being able to wear that number — I know that even though he’s not able to watch the games — he is from up above — but I always know he has my back. I don’t know, it’s an awesome feeling knowing that I’m the only other person in Jackson to be able to wear a number 11 and number 16 on those fields. It is truly awesome knowing that and getting to know him and have him as a brother.”

Weber went on to say he believes from watching his brother practice, play and  competing with him ever since their father, Dean, put them in sports is why he has the work ethic he has today.

When Colten was younger and attended his brother’s practices, and even though he was not a part of the team, he would go on the field with Nolan and his brother’s teammates.

“I owe so much to him for getting me to where I’m at today just because at a young age he and I were so competitive at everything. I mean, he was four years older than me, but I didn’t care because I was just as good as he was,” Weber laughed. “I went to his soccer practices and baseball practices and just got right out there with the guys and tried to do what they could do. I think that’s a lot of the reason why I have some of the skills that I do have today.”

Weber said his passion for baseball as well as soccer began when his dad had him start playing sports at a young age. His father was his coach  in both sports on the youth level, and he said baseball is his favorite sport because he felt the most comfortable playing it.

Weber also mentioned the fact he was gifted with a strong arm that he could throw noticeably well with at such a young age.

“Didn’t quite know where the ball would be going when I threw hard until probably a couple of years ago,” Weber laughed. “It just kind of took off because chances just kept opening up for me, and I kept taking them.”

One of those chances arose when Jackson baseball head coach Bryan Austin encouraged Colten to attend a baseball camp in Texas where he was discovered by Dallas Baptist University.

“I went there, and I blew my own mind really hitting 92 [miles per hour] on the gun,” Weber said. “And then [Dallas Baptist University’s] coach was like, ‘Hey, I would really like to watch you pitch.’ I just so happened to have one of my best games on the mound for him, and that’s how I got to my college.”

Weber officially signed his national letter of intent to play baseball at Dallas Baptist on Nov. 10, and while he will be playing collegiately as a pitcher, he was first looked at as a catcher.

Colten was Jackson’s starting catcher his sophomore season after the team’s starter heading into the season went down with a wrist injury in a game at Farmington.

Coach Austin told Weber heading into his sophomore season at the team’s tryout that he would be on varsity and also play some junior varsity. However, when the team’s starting catcher went down with the injury, Coach Austin had another message for him: “Weber, get out there.”

“I just looked at him and was like, ‘What did you say?,’” Weber said. “I was then like, ‘All right,’ and I just remember the very first pitch for me on varsity was the worst experience. [The ball] ended up hitting the dirt, and it bounced over me — I didn’t know where it went.

“I was just standing there and was like, ‘Wait, where did it go?’ The guy from first [base] scored, and it was bad but we were winning like 10-0. Coach Austin just got fired up — he didn’t like that. So, he called me to the mound to give me a nice chewin’, and after that I never let a ball get past me.”

Weber said fundamentally he was not the best catcher heading into his first varsity appearance, but his strong arm helped make him a standout at the position.

Colten received help on his fundamentals from the team’s fallen catcher, who worked with Weber on positioning as well as blocking.

“So, a lot of [my success that year] I owe to him,” Weber said. “I just got really good at it — it was hard to explain. That was actually what I was first looked at for colleges. Murray State looked at me my sophomore year to be their catcher.”

Colleges then found out Colten could pitch, too, when he threw 92 miles per hour at camp and then by breaking Jackson’s strikeout record last year.

“You have to have all speed, but if you can locate your fastball that’s going 87, 88 [miles per hour] kids will swing and miss,” Weber said. “That’s where my location really started to play a factor. So, after pitching my first couple of starts I was like, ‘Wow, I can really do some damage on the mound.’

Weber went on to talk about the first bad game he had his junior season, which happened to be against crosstown rival Cape Central. He reminisced about having two solid innings to start the game, but then he lost his location and failed to find the strike zone.

Location was then Weber’s main focus because he knew full well he had the ability to break former teammate Michael Houchin’s record of 85 strikeouts.

However, Weber actually had doubts that he was going to break the record because he was out for a few games due to a knee injury. He ended up breaking and exceeding the record in Jackson’s final game of the season in sectionals.

“That was a goal for me, and I wanted to break Michael Houchin’s record because I remember catching him when he did it,” Weber said. “It was a cool feeling just catching him knowing that he just broke the strikeout record. It was, I think, my third inning in the sectional game when someone told me that I broke it. It wasn’t a big celebration because we did not get any hits that game, but it was a small victory in my head.”

By being both a pitcher and catcher at the high school level, Weber believes this gives him an advantage over batters because he knows what pitches he needs to use in specific situations.

“I don’t know if it’s just me, but being a good pitcher and catcher I feel like I have a good feel for when I’m catching knowing what pitchers should be throwing and where to,” Weber said. “Going at pitcher, it’s kind of the same thing — in this situation that needs to happen, but also its different for me because the fastball is the answer for a lot of my questions.”

Weber went on to say other pitchers must have plenty of other pitches in their arsenal because batters can usually hit an 80 mile per hour fastball unlike his especially since he is looking to maintain a speed of 88 to 90 MPH this season.

Going into a game, the first two to three innings of getting through the lineup is vital to Colten so he can understand the type of caliber of hitters he is facing.

“Once you know that — any person can see and understand that this guy can hit a fastball — this guy just put a curveball over the fence — let’s not give him the curveball,” Weber said. “After being a pitcher and catcher, you are comfortable in whatever situation you are in, and you have a lot of confidence.”

Other than focusing on gaining more velocity on his fastballs, he has also been working on his other three pitches.

“Now people know, ‘Hey, he has the fastball,’” Weber said. “Like I said, you don’t have to be a great hitter to time up a fastball — it just takes one swing to hit that ball. I’ve been really focusing on curveball, slider and changeups a lot this year and locating them and putting the ball where I want and knowing when to throw them. That’s probably the biggest thing I’ve been working on in the offseason.”