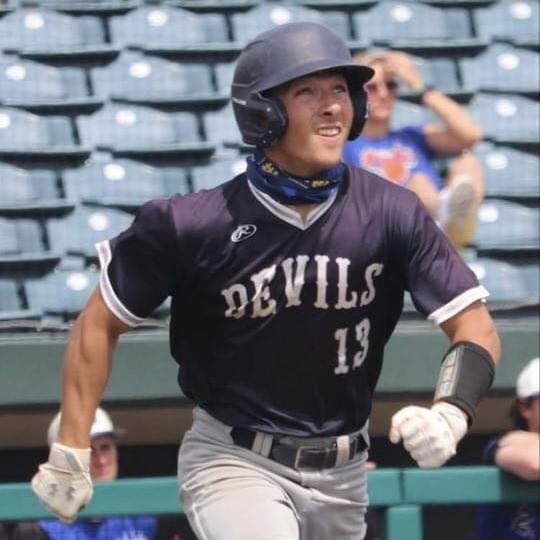 Like thousands upon thousands of high school baseball seniors last spring, Saxony Lutheran 2020 graduate Hunter Bilek didn’t have a senior campaign due to the coronavirus pandemic.

However, in no way, shape or form was Bilek’s baseball career going to end there. Fast-forward to today and not only is Bilek currently playing for Jackson Senior Legion 158, but he finished his freshman year as one of the top players for Kaskaskia College this spring.

“It started out a little rough because in the first doubleheader of the year, I didn’t play in either game,” Bilek admitted.

Luck struck the former Class 3 First Team All-State selection, though, as the team’s second baseman got sick, which allowed Bilek to play in a four-game series. Even though Kaskaskia’s second baseman was able to make a comeback, the team’s left fielder was then injured.

Bilek took over in left field and eventually became his team’s leadoff hitter — the same spot Hunter batted in when he helped the Crusaders reach the 2019 Class 3 Final Four.

“I hit so well at the beginning of the year that the coaching staff had to find a spot for me,” Bilek said. “Once I got used to playing in left field, it was actually easier for me. But that first game when I walked up and saw my name in left field, I was pretty nervous.”

Bilek ended up having the most at bats for Kaskaskia with 169, and with that he recorded a .314 average and finished with a team-high 53 hits and 42 runs. Hunter also recorded the most stolen bases with 15 and tied for first in doubles (nine) while hitting one home run and driving in 19 runs. Defensively, Bilek only recorded two errors through 47 games.

“The pitching in college was a lot better than what I saw in high school,” Bilek said. “Three fourths of the teams have a pitcher that’s going Division-I. Even the other teams have a guy that’d be by far the ace of a high school staff, so it was a tough adjustment once we got into conference play.”

The main adjustment Bilek said he had to make facing college pitchers was getting started sooner in the box. “Get your load started, get your foot down and give yourself more time to react because everything is just a little bit faster.”

Bilek had to make another adjustment early on because he said he was being “ate up” by elite pitching. When Hunter would swing, he had a leg kick, which made it harder for him to stay back against sliders and off-speed pitches. Hunter decided to go back to his old batting stance and take away the leg kick.

Kaskaskia finished with an overall record of 29-24-1 while going 14-16 in conference play. The team went on a 10-game winning streak during the month of April.

On top of individual success, Bilek helped Kaskaskia win its fourth Region 24 Tournament Championship with a 5-3 win over Lincoln Trail College. During the fifth inning, Hunter had a triple in the contest and scored on the next base hit.

“The whole regional tournament felt just like the 2019 Saxony playoff run,” Bilek stated. “It was back-and-forth action all three games that we played, and I mean we had to score in the top of the ninth in all three games to end up winning.

“It’s hard to put into words how exciting it was being able to go on to Chicago after that. … Going into the regional tournament, we weren’t playing the best but got hot. It was a really, really fun ride.”

Winning the regional tournament is by far what Bilek is most proud of during his first season with Kaskaskia. No. 2 on the list would be when he hit his first home run, which came at Shawnee Community College.

“That was a pretty cool moment,” Bilek recalled. “It hit the top of the fence and bounced over, so I was a little lucky.”

Another difference for Bilek between Kaskaskia and Saxony was, of course, the overall talent level. He said every player comes from a high school where they were either their team’s best or top-three best player.

One thing that helped make playing college baseball not so difficult of an adjustment for Bilek was having been coached by the likes of Paul Sander at Saxony. “The work ethic I gained at a young age and improved on at Saxony translated.”

What Hunter enjoys the most about playing for Kaskaskia is the family environment within the program. “My teammates really felt like brothers to me. The whole environment reminds me of Saxony and that’s why I love it so much.”

Bilek has one more season of baseball left at Kaskaskia, and he hopes to continue playing after that at a four-year university.