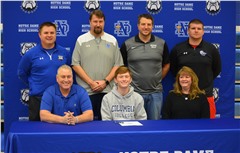 Dohogne said he knew Columbia was the right school for him when he visited the campus. Dohogne also knew the coaching staff believed in him.

As the Bulldogs ace, Dohogne helped Notre Dame win the conference tournament with a win over Jackson in the championship game. Dohogne also finished with an overall record of 5-3 and produced 51 strikeouts while having an earned run average of 2.26.

“[Last season] was amazing having my teammates there behind me and helping me through it all,” Dohogne said. “That’s what my teammates do — they push me and make me better and successful.”

Notre Dame finished the 2019 season 20-7 overall with a 4-0 loss to Sikeston in the Class 4 District 1 Championship game after being able to beat the Bulldogs 8-6 during the regular season.

It has been Dohogne’s dream of playing baseball at the next level ever since he was a child. Like many, Dohogne’s career began in a back yard playing catch with his father.

“Ever since I picked that ball up, I just knew that’s what I wanted to do with my life,” Dohogne said. “Hopefully it treats me well, and hopefully I’m successful and just keep rolling with it.”

Dohogne doesn’t describe himself as a fastball pitcher since he has more success with off-speed pitches like the changeup. Notre Dame’s Missouri Baseball Coaches Association Hall of Fame head coach Jeff Graviett said one of Dohogne’s changeups from last season looked like he was throwing a frisbee.

“It was going around on social media that one of his changeups — the movement on it — looked like a frisbee coming in there,” Coach Graviett said. “He’s able to take that speed off [a pitch] and also create some movement. Talking to Columbia’s coach, I said that’s what [Dohogne] is going to bring to the table.”

Dohogne said he was able to develop his changeup into what it is simply by putting in the work everyday. He did this because he knew it was a pitch that would strike out batters at a high rate.

“[The changeup] is off the table — breaks right off the table,” Dohogne said. “I just love it because it has so much movement, but I have a lot of work to do on it.”

Graviett went on to say Dohogne will not be a speed pitcher at the college ranks since he has so much success with his off-speed pitches, which also helps keep his pitch count low during games. One of the reasons why is because when a batter connects with one of Dohogne’s pitches, it is usually hit to a defender for an easy out.

“As you see on the basketball court, he is a competitive kid,” Coach Graviett said. “That’s what he brings to the table, and when he gets out on the mound he competes. He’s not going to light up a radar gun, but for him to be SEMO Conference Pitcher of the Year was phenomenal.

“He comes right at [batters], and he’s a kid you don’t have to worry about using with the pitch count. His competitiveness on the mound makes him who he is.”

Graviett sees Dohogne having no trouble facing collegiate batters because of his competitive nature and said there is no moment too big for him. Graviett attributes Dohogne’s comfortability on the varsity level from starting on the basketball team since he was a sophomore.

Dohogne has helped lead Notre Dame’s basketball team to a 21-4 overall record this year as the Bulldogs are on track to win the SEMO Conference Regular Season Championship. Notre Dame was also seeded No. 1 in the upcoming Class 4 District 1 Tournament, which the Bulldogs will host.

Even though this will be Dohogne’s final season playing organized basketball, he still tries to make time to work on baseball.

“It is hard to get in the cages and bullpen [during basketball season], but I still try to grind it out even after basketball practice,” Dohogne said. “I’ll go out to practice — maybe get some swings and throws in. Just at least a couple days a week to get my arm going.”

Dohogne has also been spending plenty of time in the weight room and has even gained around 15 pounds heading into his final season of high school baseball.