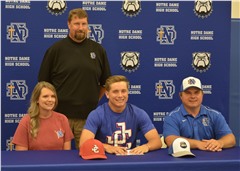 Sports can sometimes create an unbreakable bond between people, and that is exactly what baseball has done for Cape Notre Dame senior Brayden Eftink and his father, Josh.

Eftink was unable to play his final season with the Bulldogs since it was canceled due to the coronavirus pandemic. Among wanting to win a Class 4 District 1 Championship, Eftink wanted to break Notre Dame’s all-time home run record, which is held by his father.

“At first it was devastating, but now that baseball is back in the summer I can get my mind off of it,” Eftink said. “I’m playing with the [Charleston Fighting] Squirrels, but I mean [losing the season] sucks. There’s nothing we can do about it.”

Even though Eftink missed out on attempting to accomplish these goals, his baseball career is far from over since he officially signed with Jefferson College earlier this month. Brayden is more than familiar with the program since his father played there.

“It was really cool [to sign with JeffCo] because my dad went there in his third year of college,” Eftink said. “So I’m going just where my dad went, and it’s going to be pretty fun I think.”

Besides the fact Eftink’s father once played at JeffCo, Brayden has noticed the program does well at developing players and moving them on to play at four-year schools. Not only is Eftink wanting to play baseball at another college after his time with the Vikings, but it is his dream to be selected in the Major League Baseball Draft.

Last season, JeffCo finished with an overall record of 47-10 and won the Missouri Community College Athletic Conference Championship. The Vikings also finished the year at No. 20 in the NJCAA Rankings.

Eftink traveled with his father during his college playing days and has always been around the sport. The first baby picture of Brayden is of him holding a baseball and a baseball bat.

Had Eftink been able to have his final season of high school baseball, he would have probably broken not only his father’s home run record (12) but also Josh’s all-time runs batted in record of 50. In his two years in the starting lineup for Notre Dame, Brayden combined for eight home runs and 43 RBIs.

Eftink produced a career-high five homers along with 19 RBIs and a batting average of .303 with 27 hits, seven doubles, three triples and 20 runs last season. In 2018, Eftink batted .447 and recorded 42 hits, two doubles, four triples, 16 runs and a career-high 24 RBIs.

“My dad is a coach here, so we’d come to the high school and train all the time — just us,” Eftink said. “I’d hone in on my hitting and everything, but also just lifting in general helped a lot. A lot went into [my success], and it turned out pretty well.”

One of the positives about playing baseball year round and in the summer with the Fighting Squirrels, Eftink said he is always seeing different types of pitchers, which helps with his batting.

Eftink established himself as one of the Bulldogs top arms his junior year, where he went 3-1 overall, finished with an earned run average of 3.12 and tied fellow senior and pitcher Kam Dohogne for a team-high 51 strikeouts. Dohogne has already signed to play college baseball at Columbia College.

The last championship Eftink won on the diamond with Notre Dame was the SEMO Conference Tournament title, thanks to a 4-1 win over crosstown rivals Jackson at Capaha Field. Eftink recorded one of his team’s seven hits in the contest.