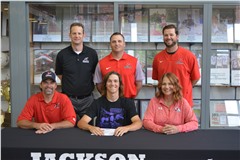 Dobbs told Welker it would be a pretty good idea to sign with Fontbonne since the team was losing starting outfielders to graduation.

Welker, a two-time SEMO All-Conference outfielder, took Dobbs advice as he signed his National Letter of Intent with Fontbonne on May 15.

“All my stress is gone,” Welker said. “I’ve got my future planned out finally, and I see this as an achievement in life signing.”

Welker also felt he fit in with the school when he visited Fontbonne in the fall. He also plans on going to medical school later and Font-bonne provides several fields of study for Welker to choose from.

Welker finished with a batting average of .307 along with 27 hits for 37 runs in his final season with Jackson. He also went 5-2 as a starting pitcher with an earned run average of 2.908 and 39 strikeouts.

Defensively, Welker held a fielding percentage of .939 with only three errors.

“[Fontbonne] is getting a guy who can play all three outfield positions and he can also pitch if need be,” Jackson head coach Bryan Austin said. “For us, he has been one of the top two guys in our lineup that we have had in our program.”

Heading into college baseball, Welker said he will be focusing on becoming a better teammate and will also focus on batting.

Coach Austin said he has seen a lot of growth in Welker over the last four years by maturing and improving as a baseball player.

“He made a big transition this year from left field to center field, and we’ve had some pretty successful center fielders in the past, but he ranks right at the top with all of them,” Austin said. “You can go back to the district title game where he made an over the shoulder catch that was unbelievable. It was probably one of the top high-school catches we have ever seen.”

Welker was able to help lead the program to its third Class 5 District 1 Championship in the last four years as well as a sectional championship, second in last three years, this season.

Welker was also a two-time all-conference selection as a cornerback for Jackson’s football team by compiling 14 interceptions over the last two years.

“I would say that if you’re thinking about playing football in high school, don’t miss out,” Welker said. “You’ll never forget the memories you make in high school football here at Jackson.”