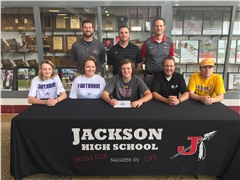 Braeden Dobbs’ senior season with the Jackson baseball team has come to an end, but his career as a baseball player is far from over.

Dobbs officially signed his National Letter of Intent with Fontbonne, located in St. Louis, on May 3 to continue his playing career where he will major in psychology.

Dobbs was recruited by Fontbonne following a player showcase in the offseason where he threw behind the plate as a catcher. He then started swinging the bat, and that is when Fontbonne fell “in love” with him.

“The campus was beautiful,” Dobbs said. “They have a psychology program, I love the atmosphere and I love the coach. I just loved everything about [Fontbonne].”

Even though Fontbonne provided Dobbs with everything he wants in a college, it still wasn’t an easy decision for the All-District infielder.

“It was a difficult decision,” Dobbs said. “It was a long and strenuous process. Really kind of nerve-racking coming at the end of my senior year, and I’m just now picking where I’m going the next four years.”

Dobbs started at third base this season for Jackson whenever fellow senior Colten Weber was not on the mound.

When Weber was the starting pitcher, Dobbs was behind the plate catching his 90-mile per hour fastballs, and catcher is one of the positions Fontbonne wants to play him defensively.

“Third base, catcher, first base — wherever they need me really is what we talked about,” Dobbs said. “… I think I’m going to have to get stronger. There’s always room in improvement for that. I think I’ll have to work on my hitting — more consistency with that.”

Something Dobbs cannot wait for while attending Fontbonne are the perks the university and college itself will bring.

“The freedom — it sounds pretty good, and I’m just right there in St. Louis, too,” Dobbs said. “It’s a beautiful city — that’s always a plus.”

Dobbs helped lead Jackson to breaking the program record for most hits of 264 with 285 this season. He and two other teammates, Justice Crosnoe and Cole Welker, are tied in second place for most hits by a single player in one season at 39.

Heading into college baseball, Dobbs is confident his high school coaches have prepared him for the next level.

“I think what Coach Austin has done is exceeded all expectations I had,” Dobbs said. “All of the coaches have done really great with the program and preparing us for the next level and succeeding at [the high school level].”