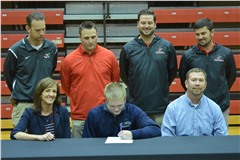 After a season for the Jackson baseball record books, all-state senior pitcher Tyler Martin signed a letter of intent to continue his playing career.

Martin will be taking the junior college route as he inked with St. Louis Community College, a path most former Indians have taken.

One of those happens to be former Jackson player Drew Brown, who signed with St. Charles CC in 2017. Martin said Brown was one reason why he decided to sign with St. Louis CC.

“I saw how much [Brown] improved over one year after going to community college — his speed increased a lot,” Martin said. “You don’t have to go off to a big D-I school right off the bat, so I thought, ‘I can go to JUCO and get faster and stronger, and then maybe down the road I can go to a bigger school and see where it goes from there.’”

Another reason why Martin decided to go to St. Louis CC was because of the coaching staff and the program, but he is also looking forward to studying engineering. He also chose the school because it’s close enough to home where he can come back to the area for the holidays.

Last season, Martin finished with a program record nine wins (9-0) and earned run average of .77 to help lead the Indians to their first Class 5 District 1 Championship since 2016.

Martin also recorded a team-high 50 strikeouts while only walking 11 batters.

With Martin, sixth-year Jackson Head Coach Bryan Austin now already has two seniors signed to play collegiately  heading into the 2019 season. Coach Austin is thrilled to know his players won’t have to worry about college debt, but he’s also excited to  have a left-handed pitcher like Martin back for one more year.

“[Martin] is a big-time signing for St. Louis,” Austin said. “He’s a kid whose velocity is average right now, but when he puts on college size and continues throwing year-round, he’s going to have velocity that will jump four of five miles per hour. For a high school kid, he already has a plus curveball, and now he’s beginning to develop a plus changeup. You add in all of those factors, and [St. Louis CC] just got a big-time guy for two years.”

One reason why Martin said he is able to have success is because of the defense behind him, which was led by former Indian and second baseman Justice Crosnoe, who signed with Southwestern Illinois CC last spring.

Returning to the infield will be 2018 Southeast Missouri State signee senior short stop Landon Hahn, but there will be shoes to fill left by Crosnoe at second base.

Coach Austin said his infielder’s goals this season will be to set the fielding percentage to help an already impressive pitching staff.

“When you know that you’re bringing back your No. 1 guy, it kind of sets up the season knowing we have three guys with varsity experience,” Coach Austin said. “We’re adding in three juniors that can compete at that level as well, so we know we’re ahead of the game when it comes to that. The bigger part of it is we know we lost two defenders, so with Tyler how much success he has also relies on our defense of being very good. That’s been a big emphasis for us this offseason.”