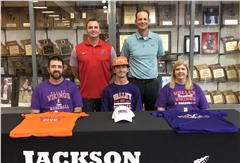 Tanner Hecht started pitching when he was 10 years old, and
he will continue to do so for the next four years at Missouri Valley.

Hecht signed his national letter of intent with Missouri
Valley this summer following his final season at Jackson, where he went 7-1
overall with 47 strikeouts and a team-best 1.24 earned run average.

For his senior campaign, Hecht garnered SEMO All-Conference
and Class 5 District 1 honors, while also being invited to play in the Missouri
High School Coaches Association Class 5 All-Star Game. He pitched three
scoreless innings and recorded five strikeouts in the game and verbally
committed to Missouri Valley the following week.

What Hecht enjoys the most about pitching is that he feels
like he’s able to control the game, which he did by only allowing 19 runs in 10
starts as six came from his final start against Hillsboro.

Jackson fell to Hillsboro in the district semifinals for the
Indians season to come to an end at 20-9 overall, but during Hecht’s junior
year they won the district title and finished one game away from reaching the
state final four.

“It was new to me because in J.V. I could always throw [the
ball] past [batters],” Hecht said. “Instead of that [on varsity], it was more
of you have to pitch now. I struggled junior year — didn’t pitch very well.
Then come senior year I had been there and knew some situations and how to get
out of them.”

Hecht started using pitches like the curveball and changeup
to get out of some of these scenarios, and he said he was able to improve his
changeup dramatically heading into this past season.

Fellow 2019 graduate Tyler Martin was one of the reasons why
Jackson won a district title their junior year, where he finished with the best
record in program history at 9-0 with a program-best ERA of .77.

Hecht credits the talent of his defense to being able to
finish with the third most wins in Jackson history, which was led by fellow
senior shortstop Landon Hahn, who signed with Southeast Missouri State.

Third baseman Boone Gartman was also one of the team’s
leaders on defense, who will play in college with Martin at St. Louis Community
College.

“His best days are still ahead of him,” Austin said. “He’s a
slim guy who locates the fastball, the curveball and the changeup and is
currently running at 80 to 82 (miles per hour). College is going to do him
well.”