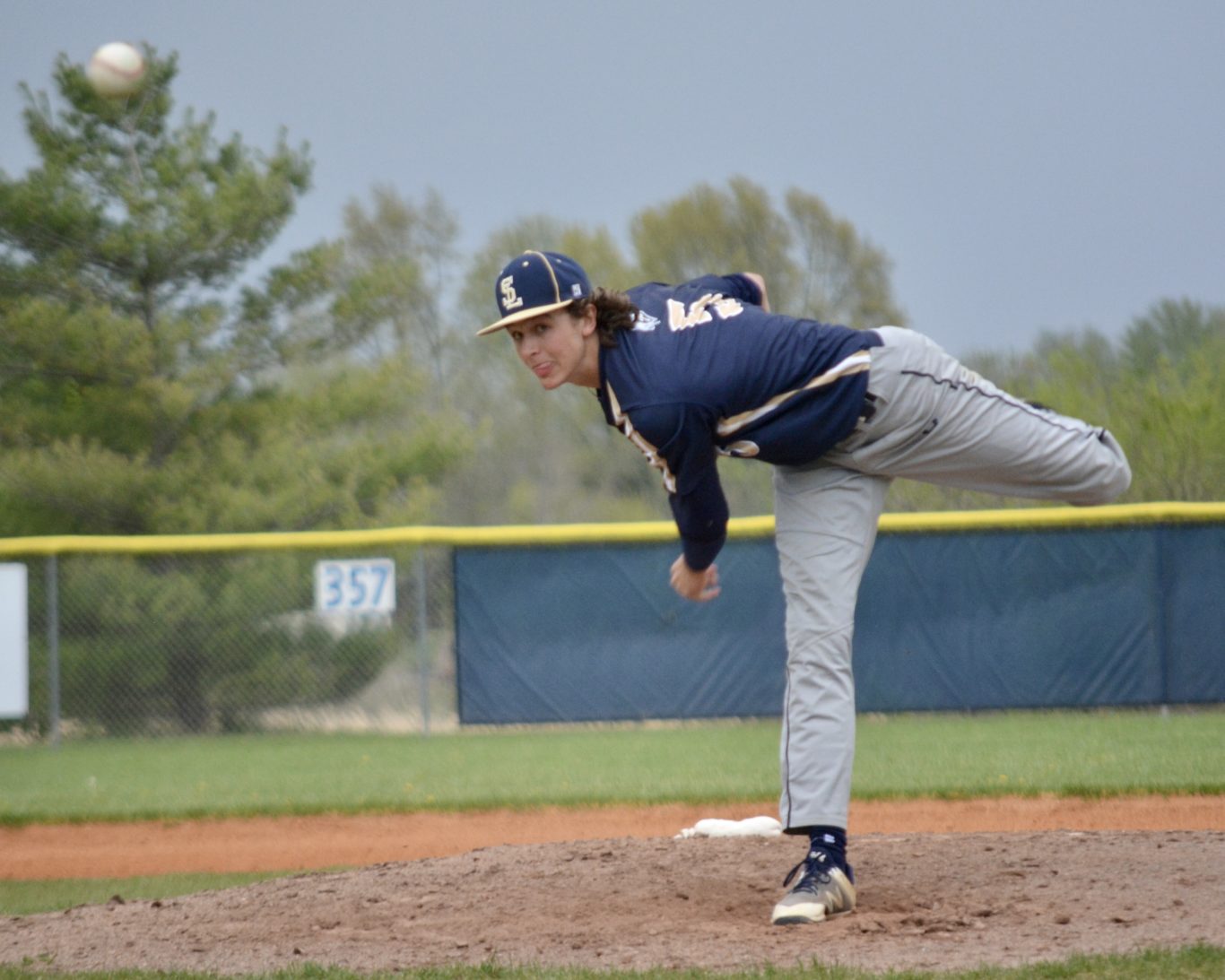 Saxony Lutheran senior pitcher Eli Brown picked up his third win on the mound in a 5-1 victory over Jefferson at home on Friday. Photo by Jay Forness

Through the first three weeks of the spring season, the Saxony Lutheran baseball team has yet to have a blemish on its record. The Crusaders are 9-0 while also currently being the No. 3 ranked team in Class 3 by the Missouri High School Baseball Coaches Association.

“Well, I mean we’re undefeated,” Saxony head coach Paul Sander said when asked how it felt to be ranked third. “We really didn’t know how good our defense was until [the Delta game]. Delta put the ball in play on us. We fielded it and fielded it well and didn’t make an error. We didn’t make an error today. So far so good, but we really haven’t had to play a lot of defense with our pitching so far till the last two games.”

On top of being ranked and unbeaten, Saxony has currently outscored teams 97-9 after beating Jefferson 5-1 Friday in a game where senior pitcher Eli Brown only allowed one hit and struck out 10 batters. Jefferson’s lone run scored on the Crusaders came off a wild pitch, so Brown has still yet to allow an earned run this season.

“Jefferson is a good team, and they’re going to be one of the favorites in their district,” Saxony head coach Paul Sander said. “We proved today that we can play with anybody. Being able to score two in the first with Eli Brown on the mound is just huge. You give him two runs early, and he feels like, ‘I’m in charge.’

“He’s just Eli Brown. He’s the same every game, and he’s dealing with four pitches. He’s not scared of anybody, so this was just his normal day.”

Along with a perfect ERA, Brown has struck out 40 batters while only allowing four hits and walking four batters. Half of Brown’s Ks came in his first start of the season when he had 20 (tied for fourth all-time in MSHSAA history) for Saxony to defeat Bloomfield 9-0 March 20.

Offensively, the Crusaders were led by two first-year starters in juniors left fielder Hunter Hamilton and center fielder Zac Lewis. Hamilton recorded a game-high two hits along with scoring one run and driving another in, while Lewis had three runs batted in and one single.

As Saxony’s leadoff hitter, Hamilton currently has a team-high .536 batting average and 15 hits while also scoring 14 runs. Two other Crusaders are batting over .400 as well in junior second baseman Colin Tarry (.438) and senior shortstop Tanner King (.417).

Lewis drove in two of his runs off one hit while the last score came on a sacrifice fly to send senior first baseman Will LeDure home for a run. Hamilton’s lone RBI came in the bottom of the fourth for Saxony’s fifth and final run off a double.

“[Hamilton] has been hot for about a week,” Coach Sander said. “I hope he can keep that going. I don’t expect him to stay as hot as he is right now, but I hope he can ride it out a while. [Lewis] had a two-out single in the first, and we only had five hits but made all of them count for RBIs.”

Lewis’ first two RBIs were in the bottom of the first with the bases loaded after junior third baseman Wilson Lodge was struck out in the previous at bat. After being thrown a ball, Lewis singled on a grounder to right field to send Hamilton and King home.

King has scored a team-high 17 runs while only having five hits, but he’s been walked 12 times and hit by a pitch 10 times for an on base percentage of .750.

King scored two of his team’s runs against Jefferson, while LeDure and junior right fielder Jacob Johnson also scored along with Hamilton. Driving in one of those runs off a line-drive single was Lodge in the bottom of the third inning.

Along with being one of Saxony’s top players both offensively and defensively (.944 fielding percentage). King is also 2-0 on the mound with 20 strikeouts and a 0.75 ERA. Behind Brown and King in the pitching rotation for Saxony is LeDure and Lodge, who are both 2-0 with 15 Ks apiece.

None of Saxony’s pitchers have allowed more than two runs this season as starters King and Lodge have only given up one earned run apiece. Brown and LeDure haven’t allowed any earned runs but there has been three scored between the two.

Among the starting pitchers for the Crusaders, Lodge has allowed the most hits (eight), while LeDure, Brown and King have given up the least with three, four and five hits, respectively.

“[Only having given up nine runs] is 90% because of the pitching,” Coach Sander said. “We’re just happy to be where we’re at right now. We’ve got a tough road coming up with two home games and two road games next week. We stay on the road for about a week after that, so we’ve got four road games in a row. The road is tough, and we’ll see how we do.”

One of those road opponents for Saxony will be current Class 1 No. 1 ranked Oran (7-1) on April 20, which has outscored opponents 72-25 through eight games. The Eagles one loss came to Class 3 unranked Portageville (7-4) by a score of 7-3 March 20 on the road.

Six days after facing Oran, the Crusaders will then travel to face Class 3 District 2 opponent and No. 4 ranked Kelly (9-1) April 26. While the Hawks have outscored teams 92-22, they were shutout by district opponent Woodland (3-2-1) 6-0 on March 31 in a home game.

Currently not in the starting nine for Saxony is quite a valuable piece of the puzzle for Coach Sander in senior Joel Koenig. Koenig, who Sander had set to fill the utility spot this season, is out with an injury until at least late April.

“We hope to get him back the last two weeks of the season, but we don’t know,” Sander said. “It’s changed the lineup because we don’t have the Jack Foeste role Joel was going to play.”