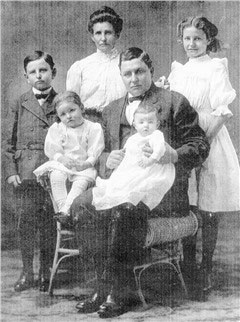 The William S. Stearns (sometimes spelled Starns) family came to the Missouri territory c. 1818 in an ox-drawn covered wagon ladened with the family’s possessions. William had been born in Virginia c. 1782 and married in 1804 to Mary Ann nee Pinkston born c. 1782, (from family Bible). Their previous travels took them through North Carolina, on into the Blue Lick, KY, area, before crossing the Mississippi River.

In 1836, William’s first wife died and he married Elizabeth Shrum of Cape Girardeau County. William died at the old family homestead “near the headwaters of Little Whitewater, northwest of Millersville.” Family records at the Cape Girardeau County Archives show he died about 1842. It is believed he was buried with a stone marker in an area that became known as the Hartle Cemetery.

Joseph Stearns III was born on Oct. 20, 1820, on the family’s Bollinger County Little Whitewater farm. He married his childhood friend, Sarah (Sallie) Seabaugh (1826-1877) when she was 16. She was the daughter of large landowner Christian Seabaugh, Jr., and wife, Catherine. The couple had 11 children.

Joseph was a farmer, as well as several of his sons. It is believed from family records, they were the first farmers in the Southeast Missouri area to own a wheat threshing machine and tractor.

Children of Joseph and Catherine

Information is sketchy as to most of the Joseph Stearns family. However, Goodspeed’s History of Southeast Missouri gives some information. The oldest son, Charles Benton married Mary Jo Baker on Jan. 27, 1867, daughter of Joseph and Anna Baker. The 1870 census shows they had two children.

Charles was a stock-raiser and farmer of 260 acres, nice home, two barns and an orchard of 200 trees. Charles received a good education in the public schools. He and his brother Nathaniel were partners in farming until 1869. Charles Benton rode horseback with Bollinger County’s Capt. John R. Cochran’s Co. C. Missouri Militia of 91 men. He was discharged from the Civil War in July 1865 to return back to his home. The family belonged to the Spiritualist Church. Charles was a member of the Masonic Lodge AOUW. He died Feb. 8, 1921, and he is buried at the Snider Cemetery.

Born Dec. 18, 1845, the second son was named Nathaniel Pinkston. He married Anna Bast, daughter of George Bast on Jan. 13, 1870. He was particularly interested in education having received instruction in the local public schools. Besides farming, he taught school two years in Bollinger County and two years in Cape County. He owned 247 acres, two barns, large orchard and home. He was a member of AOUW Millersville Lodge No. 232 and held office of Past Master Workman.

His family also belonged to the Spiritualist Church. Nathaniel died on May 18, 1923, and is buried in the Snider Cemetery, Millersville.

The last child born to the Joseph III family was  Napoleon Bonaparte nicknamed “Polie” who was born on the family farm on April 28, 1870. He married Mahala Seabaugh (1868-1916) of Sedgewickville, the daughter of Joseph and Nancy nee Crites Seabaugh.

Polie and Mahala were the parents of Elza, Inez (Mrs. Clinton Hahs), Louis, Mable “Mapes,” and Anita “Neta” Marie (McClatchey). Napoleon farmed with his father and brothers before the family moved to 1914 Good Hope, Cape Girardeau. Polie engaged in various barten-ding jobs at the Green Tree Saloon on Good Hope, Last Chance Saloon on the southwest corner of Pacific and Broadway. The family’s home was close to the then new St. Francis Hospital on Good Hope. The Stearns daughter Inez remembered carrying lunches to the workers who were building the hospital 1913-1914.

At the time of Polie’s death, he was employed at the Central Bar on Independence and Frederick. The Daily Republican printed his obituary on Feb. 12, 1912.

“Pola Stearns died after a long illness. He was a popular saloon man — died of Brights Disease. As one of the best known saloon men of the city, he died last night at his home on Good Hope.”

On Feb. 13, Tuesday, his body was taken on the Cape Girardeau-Chester train to Jackson. From there to Millersville the body was taken by automobile, accompanied by friends and family. The interment was attended also by the members of the Eagles Lodge, of which the 41-year-old was a member.

After the death of her husband, Mahala sold her property and moved to 322 Ellis St. with her family.

Four years later, Mahala died on March 10, 1916, having suffered from tuberculosis for two years. She was 47. Her obituary printed in the Cape Girardeau Daily Tribune revealed the funeral plans: “The cartage left the family residence at 7 a.m. for the Stearns Cemetery, three miles west of Millersville. The Walther Funeral Home was in charge of the arrangements.”

Interesting were the 1916 expenses for the funeral arrangements. Purchased through Walther’s Funeral Home was “the casket and box $50, Robe $6, wagon and services $15; and four carriages $20. Jackson Granite and Marble Works were in charge of setting up two monuments for $35.”

Guardians for the minor children were assigned by probate court. Daughter Inez age 10, was awarded to Ephraim Mitchell Propst and wife, Matilda, and the sons, Louis and Mapes to David Seabaugh and wife.

(My appreciation to Don and Anna Lee Hahs for information pertaining to the family.)