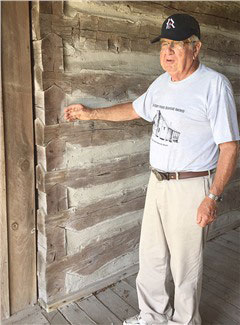 Even though it was hot July, it was a beautiful morning to drive through the hills of Bollinger County to Mar-ble Hill to see the well-preserved Massey House on Mill St.

The tour was given by two members of the Bollinger County Historical Society, Murray Dunn and Anna Van Gennip. With enthusiasm, both carefully explained this amazing two-story log house (called a four-pen) that was moved from northern Bollin-ger County by the society in 1984.

As Murray explained, “Bill and Lena May Fulton (descendants of the Masseys) donated it to us. It was from the Patton area and was moved by John Mark Bollinger by a wagon and tractor.” Anna added, “It was all covered with weather-boarding which kept the logs in great shape.”

While I researched the family, it became evident they came with an influx of pioneers from the east – both Virginia and North Carolina – to settle in Missouri. Robert G. Massey (1798-1875) and wife Elizabeth Foley Massey (1816-1876) from Foley, Lincoln County, settled in Foley. They then moved to Bollinger County where the subject of the story, Henry Franklin, was born on Jan. 3, 1843. The Robert Masseys built a log cabin in 1849 where Henry grew up with his brothers and sisters.

On Aug. 27, 1864, Henry enlisted in the Union army for the Civil War and served with Co. C, 47th Missouri Infantry, that served at Pilot Knob. He mustered out on March 30, 1865, returning to the farm near Yount.

Records show he purchased 160 acres on March 2, 1869, after which he married Isabella “Belzy” Clay (1849-1906) in Bollinger County on Jan. 5, 1868. She was the daughter of Levi and Elizabeth Jaco Clay. He used the stones from the old 1849 house fireplace for their new 1869 two-story Massey home near Yount. The couple were the parents of nine children.

From a book in the Massey house comes the following story about one of the family’s adventures to Colorado Springs, probably in the late 1800s. Henry decided to take two mules to Farmington to purchase a wagon. It was a sturdy one of iron wheels, staves across the top covered with canvas. Shortly after, the children all piled in the covered wagon with their supplies and Henry and Isabella left on a six-month journey to Colorado Springs. On the way, it is said, Henry had to stop for a time and work to accumulate enough money to continue on.

Another trip to Colorado was planned, this time taking along a friend, Marion Harper. After a time when the family returned to Missouri, three teenaged children, Ellen, John and Tom decided to stay in Colorado. Isabella and the other six children returned by train to Fredericktown, while Henry and Marian returned with the wagon and mules.

Henry Franklin Massey died of bronchial pneumonia and senility on Dec. 14, shortly before his 90th birthday. Dr. S.C. Vaughn of Patton was his attending physician. Burial was handled by Bey Undertaking of Perryville to the Yount Community Cemetery. Henry was a lifelong Methodist. Isabella was also buried there. He was survived by his second wife Amy Massey at the family home.

The Marble Hill Banner Press, Dec. 22, 1932, stated all the Massey children had died before 1932 except two: Wood L. Massey of Yount and Thomas Massey of Colorado Springs, CO.

Taking a tour of the Massey log home museum was like taking a step back to the 19th century in rural life Missouri. On the first and second floors, large breezeways or “dog trots” provided great summer places of cool repose for humans or animals. On one side is the kitchen and on the other the living area. The dog trot keeps the kitchen heat separated from the family’s sitting room.

The walls are made of squarehewn oak logs, hand hewn flat on two sides with a broad ax and securely put together with hewn corner notching. (As shown in the picture).

Hand split shingles cover the roof much like the original.

The windows and six doors are held together with wooden pegs. In the window glass, one can still see imperfections.

Within the Massey’s family kitchen are many period artifacts for visitors to see. The kitchen cabinet stored the family dishes and other items such as rolling pin, dough board and bowl, cutlery, flour, cornmeal, coffee grinder, etc. Upon the cooking stove are displayed old fashioned waffle iron, angel food cakepan, irons, candle molds, etc. Herbs and plants are hung from the rafters. The dining table, sitting in the middle of the room, is set with the family’s dishes and cutlery, spoon holder, molasses pitcher, etc.

Across the dogtrot was the living room which includes a native rock fireplace, fainting couch, 1869 corner chair, broom and several framed pictures of the Henry Massey family, and scrapbook of the family history. Above the door hangs Henry Massey’s rifle.

The upstairs is also completely furnished with a center dogtrot. It contains the family bedrooms, which today is a bedroom on the right and a loom room on the left. The bedroom contains bedstead, chest of drawers, colorful quilts of various Early American patterns typical of the day. On the floor is a loomed full-floor carpet sewn from three-foot carpet runners.

In the loom room is a loom found in an old barn near Patton. Patricia Rhodes researched the operation of the large wooden loom through the Southeast Missouri State University. Through her interest, she created an entire woven carpet for the bedroom across the hallway. Additional items in the room are stained glass window from a Presbyterian Church, arrow heads, etc.

Murray explained how much Henry Massey loved hunting. On the back of the log house are many holes in which pegs held the many animal skins of Henry’s and his neighbors.

By the back steps hangs an old-fashioned dinner bell from the Hog Creek area, east of Marble Hill.

Across the lawn behind the home is a newly constructed finished one-room schoolhouse built by Murray Dunn. It has also been a popular tour for school children.

Standing separately on the grounds are modern rest-rooms fashioned from the old pioneer Hinkebein family log house near Leopold. The logs were donated and built into the facilities in 1987.