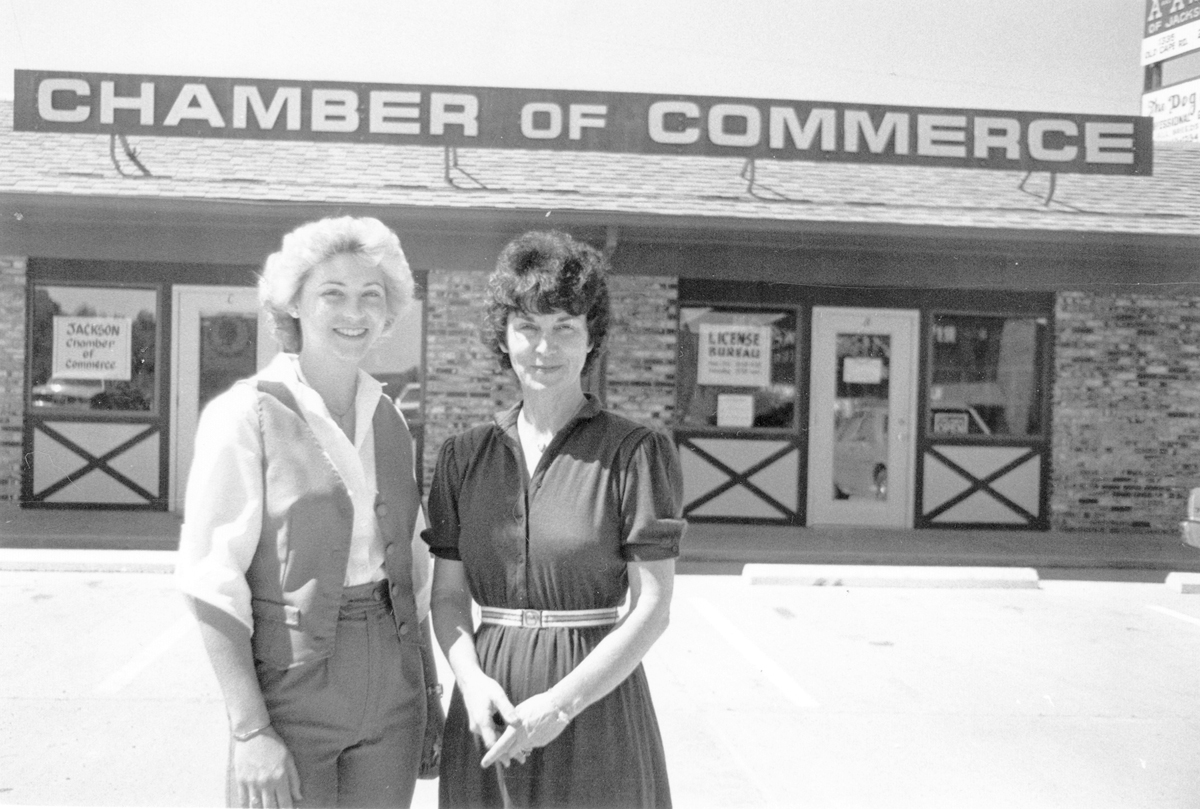 Sherri Ladreiter and Cindy Smith in front of the old Chamber of Commerce building on Old Cape Road in Jackson. File photo

The Commercial Club, forerunner of today’s Chamber of Commerce, was made up of visionary men for the betterment of Jackson, the town in which they lived and raised their families. It was the catalyst which promoted businesses and improvements to the county seat as early as June 5, 1905.

John A. Snider, W. B. Schaefer and C. W. Henderson were appointed by the Jackson Commercial Club to ask the city council to call a special election to establish a waterworks and electric light plant to be owned by the city.

In another newspaper item found in the Cape Democrat March 5, 1905, the Jackson Commercial Club was very instrumental in helping to convince the public that the county needed a new courthouse. The club at that time elected new officers. “In spite of the rain and mud, a large group of 123 members gathered and elected leaders for the Commercial Club of Jackson: President, William Schaefer; Vice president, R. W. Russell; Secretary, Edward Hays; and Treasurer, William Bruening.

In 1908 it was the Commercial Club’s president, Edward Hays, who was instrumental in researching and promoting a Jackson Homecoming Celebration. He traveled to Pike County to observe their festivities and devised the possibilities of Jackson having their own. It was supported by the club. When there was waning interest in the Homecomers celebration in the 1920’s, it was the Commercial Club that revived the enthusiasm in the event.

The Commercial Club not only promoted in-town businesses but whole heartedly believed in the importance of our rural heritage. On July 9, 1915, they announced the club had secured four reels of live motion pictures to be shown at the Gem Theatre on Saturday afternoon at 3 p.m. They would be shown free of charge to promote farmers and farm overseers.

Early on, there is evidence in the brief newspaper account of Jackson news in the S. E Missourian, January 9, 1917, the Jackson and Cape Girardeau Commercial Clubs worked together to decide the proper location for the new Armour Plant that would be built in Cape Girardeau.

The Commercial Club was instrumental in obtaining the shoe factory. The club met to discuss the issue on March 15, 1917 after the Cape Girardeau Shoe Factory began operations in 1907. Under tireless efforts of the club, the Jackson branch opened in 1920 in the old Methodist Church on the northwest corner of North High and Washington. Soon realizing it was too small, strides were met to build a new building in 1922 on East Main.

During the First World War there was a patriotic fervor that gripped the nation. The Commercial Club did their part. To help the patriotic commitment by young men as they registered for service, on May 26, 1917, the club arranged a number of programs before Registration Day. Those leaders in charge were C. R. Sorrell, Marvin Poe, W. G. Niblack, C. L. Grant, and John Sachse. Speakers were obtained by C. C. Oliver, Andrew Caldwell, and J. T. McDonald.

The transition from Jackson Commercial Club to the Jackson Chamber of Commerce was announced on June 2, 1921 in the Southeast Missourian, Jackson news column. During the evening meeting “the club met for the purpose of adopting or rejecting the report of the committee on the Constitution and By-laws and to transact further business as may come before the meeting. The first propositions to tackle were the improvement of roads within the township of Byrd and procuring of a band for the city of Jackson. If properly encouraged, the musical talent before the city could band together into a very credible organization.”

And on June 3, “Jackson now has a full-fledged commercial organization to be known as the Jackson Chamber of Commerce. Approximately 40 citizens attended. The Constitution and By-laws were adopted, section by section, with lively discussion.”

Members qualifications in 1921 were: a white person over 18 years of age and of good repute, ministers were honorary members, and members could be living outside of Jackson but inside the county. Nine new members were added. Discussion followed as to the first items of business. One being direct attention to improving the roads within Byrd township, under the auspices of the new road committee. L.F. Wagner, A. W. Roloff and Charles Graeff were appointed to make plans to procure and maintain a city band. G. B. Miltenberger, J. H. Poe, F. A. Schneider and W. T. Ruff were appointed to have the streets sprinkled with oil or water.

On July 2, the newspaper reported the streets had received their ointment of black oil to abate the dust. Some complained, “the oil itself was a nuisance as it was carried into buildings on the pedestrians’ shoes.”

In the Cape County Post February 25, 1926, there appeared an interesting story pertaining to the Chamber’s monthly supper meeting that convened at the Methodist Church. The occasion was George Washington’s birthday with State Teachers College professor Dean H. S. Douglas as the dinner speaker. Each dinner plate served included a small American flag which members inserted into their lapels. Items on the agenda that night included whether to support the upcoming spelling match in April by providing trophy cups and medals. For the high school debaters contest they also agreed to provide the same. Both groups’ prizes would be named for longstanding member and past president, C. W. Henderson.

It was announced at the dinner, the St. Louis Producer’s Livestock Association would be in town to demonstrate how to properly grade livestock for market. The event was an instructional school for the county farmers and stockgrowers. A crowd of 600 were expected. Chairman Schmuke asked for volunteers to provide $2 each to help with the cost of the BBQ luncheon.

It was in 1938 that the Chamber desired to find new businesses to bring to town. Through the efforts of the Chamber and City, the Prim Hosiery Mill of Chester, Illinois, was put under contract in October. Upon two acres that was sold to the Jackson Chamber for $600 per acre from the Missouri Pacific Railroad, the 80′ x 80′ building was constructed by Penzel Construction on 4th East Street. Signing the contract for the Chamber were R. K. Wilson, J.V. Priest, and A. A. Boss. At its peak, 350 people were on the mill payroll.

Fast forwarding, many businesses too numerous to mention have been added over the years to Jackson’s thoroughfares – brought to the city through the combined efforts of the City and the Chamber of Commerce.

On March 6, 1974, the Wayside Inn was the sight for the Chamber of Commerce meeting. T. Wayne Lewis announced that the construction of a three-room concrete building at the intersection of Highways 72 & 61 was in the completion state and more than likely be ready for the opening by March 11. Clarence Lee Shirrell, member of the Chamber, was the donor of the new building. Cheryl Phelps Whittenburg was hired as receptionist and Secretary for the new office.

This was the first Chamber of Commerce office that was staffed by a full time employee.

Under the umbrella of the Jackson Chamber of Commerce, the Jackson Industrial Development Company (JIDC) was established to bring business into town.

The history of JIDC and its sister organization, Jackson Industrial Development Authority (JIDA), lies in that of the Jackson Chamber of Commerce, which appointed an industrial committee as one of its regular working groups.

The JIDC’s incorporation papers were filed with the Missouri Secretary of State on Dec. 20, 1957. However it continued as an arm of the Chamber.

Several sites were considered and in March 1959, 12 acres located at the northwest corner of Highway 61 and State Route D were purchased from Dr. D.E. Crites.

Several industries were contacted by the JIDC for possible location on the new site. After much communication with the Kroger Co., including trips to its home office in Cincinnati, Ohio, the company opened an egg-grading plant on four acres of the tract in 1961. Robert Hartle headed up the transaction.

Later that year, money was pledged to the International Shoe Co. for expansion of its plant, already located in Jackson. The town was in danger of losing the shoe factory, Hartle said.

In 1981, the Coca-Cola Bottling Co. of Jackson purchased the Kroger land, adding to other acreage already bought from Jackson Industrial Development and John C. Crites for a total of almost 15 acres.

It was announced on March 2, 1983 that a 50-acre Seabaugh tract had been purchased south of town on State Highway PP. It had undergone full development including road repair and utility hookups for any new business. Leaders of the committee at this time were Gene Penzel, President; Bruce Miller, Vice President, and Robert Grebing, Secretary-Treasurer. Lenco Inc. and Penzel Construction Co. both bought parcels of the Seabaugh tract.

One item on the agenda through the years 1987-88 was building a spec building ready for occupation to encourage a new industry to town. Also that year 60,000 sq. feet were added to the completion of the Lee-Rowan building.

“We work hard to make sure that we are on every-one’s radar, so if they want to relocate, they know about Jackson.

Gerau said that in addition to bringing in new businesses, the Chamber also focuses on helping current businesses in the area expand.

The R. A. Fulenwider Award Meritorious Community Service Award has been given annually since 1978, replacing another award that had been given called the Chamber of Commerce Leadership Award.

R.A. (Rowland Allen) Fulenwider was a civic leader, political advocate and community supporter who was usually at the helm furthering Jackson’s civic and industrial development.

He was a pharmacist and owner of Fulenwider Drug Store, uptown Jackson on High St. until his retirement in 1969.

Fulenwider was a devoted member and former president of the Jackson Chamber and oversaw the first chamber’s location at the intersection of Jackson Highway 61 -72 and Highway 25, (location today of Harp’s Supermarket).

Further contributions he made to the Chamber and communities of Cape Girardeau and Jackson are President of Jackson’s Industrial Development Committee; Chairman of Jackson’s Sesquicentennial event and Chair of the Chamber’s Highway Commission.

Many years of worthy recipients have been chosen over the years (seen on left) with many noteworthy speakers. Highlighting only one, the award was presented in 1991 to Leonard Sander. Speaker for the evening was Linda Godwin, Jackson’s astronaut who spoke on her recent Atlantic Space Shuttle Mission.

In October 1984, the Chamber of Commerce purchased the old Post Office building at 125 E. Main and moved to larger offices for the Chamber as well as the License Bureau and Industrial Development Corp. office. Officers that year were President, Ron Hitt; Vice President Paul Sander and Secretary-Treasurer Marybeth Williams.

In 1998 the City of Jackson and the Chamber of Commerce entered an agreement to assist in the funding of the Chamber of Economic Development and hire an executive director to manage the day-to-day operations.

Suffice it to say, not all the accomplishments of the Chamber have been innum-erated above. Over the years, evidence has shown that the attributes of the organization have carried out its mission statement: “To strengthen and promote the member businesses, civic interest and enhance our community’s quality of life.” It has thus fore accomplished its mission for well over 100 years.

Additional reporting from Cash-Book Journal Archives and by Jay Forness.