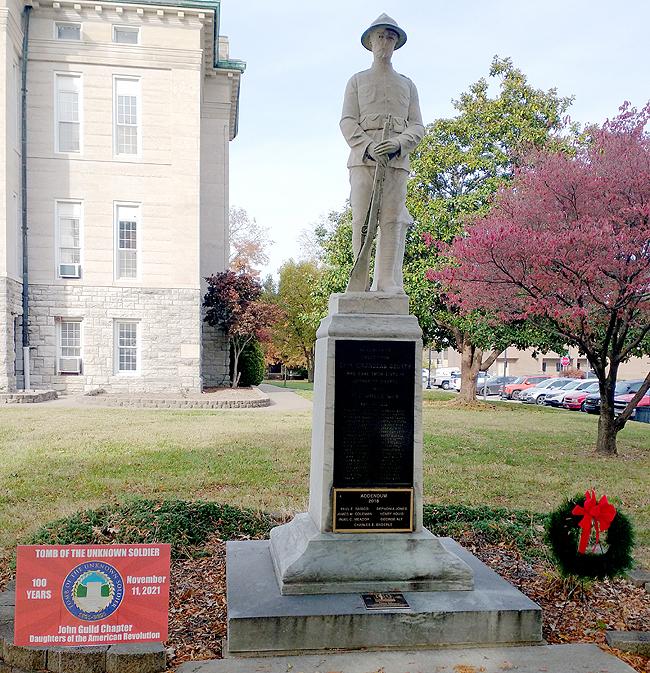 It was a day early, but members of the local John Guild Chapter of the Daughters of the American Revolution held a wreath-laying ceremony at the Doughboy Statue to mark the 100th anniversary of the Tomb of the Unknown Soldier in Arlington National Cemetery.

D.A.R. member Pam Johnson explained that the ceremony was held at 11 a.m. Wednesday, Nov. 10, instead of 11 a.m. Thursday, Nov. 11, so the wreath and the explanatory sign would be in place long before people came Uptown to watch the Veterans Day parade.

“We chose to do it at the Doughboy Statue because it represents World War I,” she added.

About 20 people gathered around the statue on the old county courthouse lawn for the brief ceremony. Johnson explained the significance of the ceremony and D.A.R. member Beth Biri set the wreath in place.

On the second anniversary of Armistice Day (Nov. 11, 1920), which marked the end of World War I, Great Britain and France interred unknown soldiers from that war. The French buried theirs under the Arc de Triomphe in Paris while the British buried theirs at Westminster Abbey in London. These represented all unknown soldiers, and their tombs became shrines where citizens mourned.

Inspired by its allies, the United States created its own Tomb of the Unknown Soldier at Arlington National Cemetery in Virginia, just outside of Washington, D.C.

In the fall of 1921, the U.S. Army selected one unknown American service member to be buried in the tomb. To do this, four servicemen were disinterred, one from each of four American military cemeteries in France. The four caskets were brought to the town of Chalons-sur-Marne, where U.S. Army Sgt. Edward F. Younger, a decorated World War I veteran, selected one casket by laying a spray of white roses upon it during a ceremony on Oct. 24, 1921.

The following day, the casket was loaded aboard a ship and sent to the United States.

The Unknown Soldier’s funeral took place on Nov. 11, 1921, 100 years ago. Thousands of spectators lined the streets and attended the ceremony at the cemetery.

Originally, the Tomb of the Unknown Soldier was a simple, flat marble slab. In 1926, Congress authorized an open competition to complete the tomb. The winners were Architect Lorimer Rich and Sculptor Thomas Hudson Jones, both World War I veterans.

Their design featured a flat sarcophagus carved with wreaths and three neoclassical figures representing Peace, Victory and Valor. An inscription on the west side reads, “Here Rests in Honored Glory an American Soldier Known but to God.”

At first, visitors could walk up to the tomb and touch it. But reports of disrespectful public behavior led to the establishment of a civilian guard in 1925. It was replaced by a military guard the next year. Around-the-clock guard duty began in 1937. In 1948, soldiers from the 3rd U.S. Infantry Regiment assumed guard duty, and they have continued to this day. Known as the Sentinals, these soldiers guard the tomb, lead ceremonies, maintain the sanctity of the space and honor the unknown soldiers with their precise rituals.

There is more than one soldier buried there.

An unknown soldier from World War II and the Korean War were buried at the site on Memorial Day in 1958.

An unknown Vietnam War soldier was also buried there in 1984. But thanks to advances in DNA technology, he was later disinterred and identified as U.S. Air Force 1st Lt. Michael J. Blassie. His family chose to rebury him at Jefferson Barracks National Cemetery in St. Louis County.

Blassie’s empty crypt at Arlington National Cemetery was rededicated in 1999 to honor all missing and unknown Americans who served in Southeast Asia during the Vietnam War.

What began as a single tomb 100 years ago today stands as a symbol for service and sacrifice in all U.S. wars. It is a tribute to all unknown soldiers, no matter where they are buried. At the Tomb, they are never forgotten.